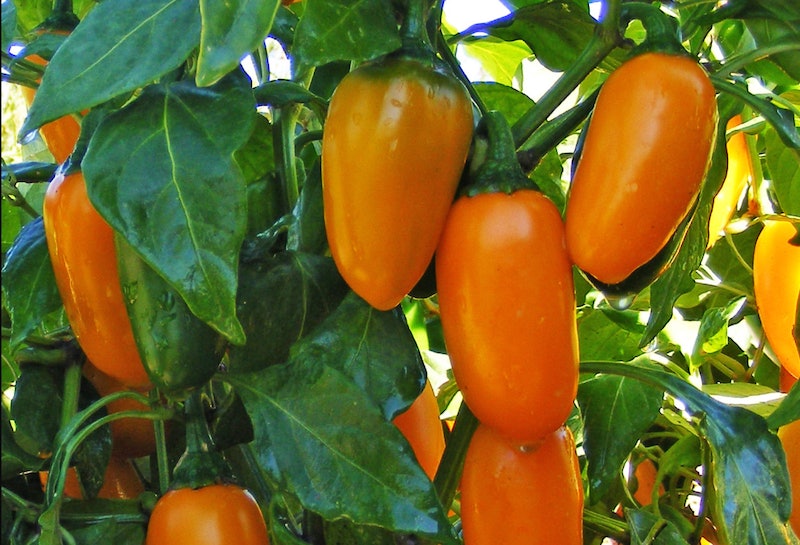 You know what? I don’t care that it’s still August. I’m leaning into the start of pumpkin spice season already, and I’m leaning in hard. Case in point: I have just spent the last hour and a half researching pumpkin spice jalapeno peppers — because yes, as I learned today from Atlas Obscura, pumpkin spice jalapeno peppers are a thing. Before you get your hopes up for a spicy pepper that also tastes of cinnamon and maybe a touch of nutmeg, however, let me bring you gently back down to earth: The peppers don’t get their name from their flavor; they get it from their color. NuMex Pumpkin Spice Jalapenos, as they're known, are one-third of a trio of peppers that were specially developed for their bold colors and given evocative names meant to describe said hues — with the “Spice” moniker referring to the kick of the jalapenos themselves.

NuMex is the name under which peppers developed by New Mexico State University’s Chile Pepper Institute are branded. Founded in 1992, the Chile Pepper Institute — which I only just learned about, by the way, and am absolutely tickled to find exists — exists solely to research and educate others about chile peppers, and, I mean… that’s terrific. I love that. It is maybe my favorite thing ever.

(And yes, the institute uses “chile” as the spelling here; indeed, according to their FAQ, the spelling of the word has varied throughout history, but in the United States these days, “chile” refers to “the plant or fruit from the plant,” while “chili” refers to this dish. Just, y’know, FYI.)

Anyway, the Chile Pepper Institute does a lot of things, of course — you can even visit their teaching garden if you like! — but one of the main things they do is develop new varieties of spicy peppers. One of their most notable creations is the NuMux Twilight Pepper, which changes color as it ages: It begins as a bright purple before turning yellow, then orange, then red. Indeed, a lot of NuMex peppers are known primarily for their ornamental nature; the Valentine’s Day Pepper starts ivory and turns red, for example, while the Easter Pepper first presents as a pastel lavender before ripening to yellow, orange, and red. They look stunning — and the same is true of the three “Fruit Spice” (my term, not the institute’s) peppers. (And yes, I am aware that jalapenos are themselves a fruit as well, but, well… work with me here.)

According to a paper detail the breeding and performance of the peppers that was published in the journal HortScience in 2015, the NuMex Lemon Spice, NuMex Orange Spice, and NuMex Pumpkin Spice peppers were created in 1995 with the goal of developing a more colorful jalapeno. By hybridizing “Permagreen” bell peppers — that is, bell peppers that stay green from immaturity all the way through maturity — and “Early Jalapeno” peppers and segregating generations from the hybridization, researchers were able to create a number of different fruit colors for ripe peppers. From there, they were able to develop what they call Lemon Spice Jalapenos, Orange Spice Jalapenos, and Pumpkin Spice Jalapenos — the Lemon Spice peppers being a bright yellow color when ripe, the Orange Spice ones being… well, orange, and the Pumpkin Spice ones being a deeper, richer orange.

Alas, you can’t buy fully-grown Pumpkin Spice Jalapenos all ripened and ready to go; however, you can order the seeds from the Chile Pepper Institute and grow them yourself. For $6, you get 20 to 30 seeds — so if you have a green (or red, orange, or yellow) thumb, maybe you’ve got yourself a new project. Good luck!

More like this
26 Ghost Story Podcasts To Get You Ready For Halloween
By Jessica Booth, Mia Mercado, JR Thorpe and Emma Carey
10 Stranger Things-Inspired Halloween Costumes For True Fans
By Emma Carey
10 Pumpkin Recipes That Are Way More Creative Than Pie & Lattes
By Rebecca Deczynski and Alexis Morillo
7 Symbolic Meanings Of Autumn — From Letting Go To Self Preservation
By Kirsten Nunez
Get Even More From Bustle — Sign Up For The Newsletter