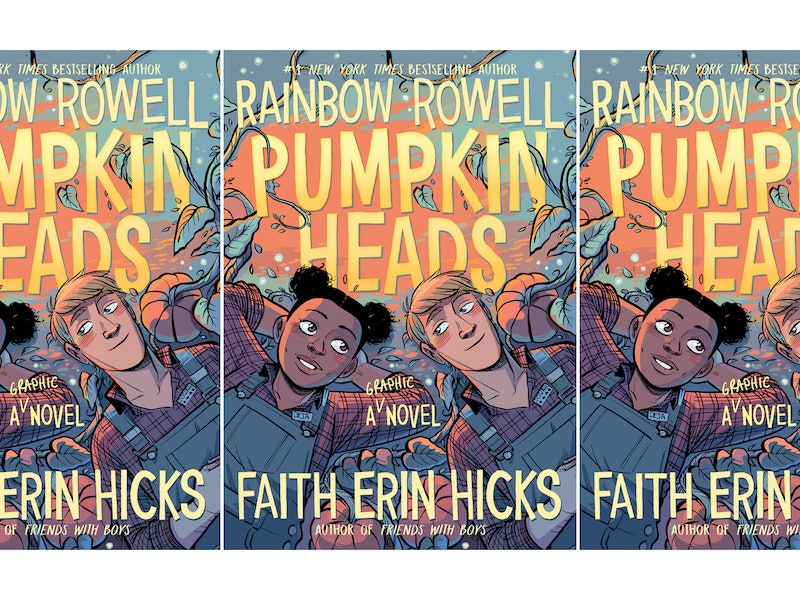 If you love Fangirl or The Adventures of Superhero Girl, I've got great news for you: Rainbow Rowell and Faith Erin Hicks have written a graphic novel together, and you can read an exclusive excerpt from it on Bustle below, ahead of its Aug. 27, 2019 release date.

Rainbow Rowell and Faith Erin Hicks' new book is Pumpkinheads, a YA romantic comedy set in the crispest and most vibrant of seasons: autumn. The story centers on high-school seniors Josiah and Deja, who have been working at the same pumpkin patch — DeKnock's World Famous Pumpkin Patch & Autumn Jamboree — every Halloween season for three years running. This is their last season before college, however, and Josiah doesn't feel great about leaving the security of his seasonal job behind.

Of course, Deja has a plan. She and Josiah are going to make their last Halloween together the best it can possibly be. They'll do all the things they've always wanted to do at DeKnock's, and Deja intends to make sure that her best friend finally talks to "The Fudge Girl," his three-year crush, whom he's never before had the courage to approach.

Pumpkinheads is a fall-tastic good time, brought to you from the best of the YA and graphic literature worlds and with gorgeous color by Sarah Stern. With novels Eleanor & Park, Fangirl, and Landline, author Rainbow Rowell has turned the feel-good romantic comedy into a fresh brand. Meanwhile, Faith Erin Hicks has been in the comics game since 1999, when she first began publishing her webcomic Demonology 101, which wrapped in 2004. Hicks has since gone on to write and illustrate several books, including Friends with Boys and The Adventures of Superhero Girl.

Even though Rowell isn't widely known for creating graphic literature, this collaboration won't be her first time around the comic book block. Since 2017, Rainbow Rowell has been the lead writer on Marvel's Runaways, illustrated by Star-Lord's Kris Anka and originally created by Saga author Brian K. Vaughan and illustrator Adrian Alphona in 2003. Rowell and Anka's version is a reboot that debuted only a few months after the premiere of the Runaways TV show on Hulu, which drops its second season on Dec. 21. You can pick up the first and second volumes of Rowell and Anka's Runaways today from your favorite retailer, and look for Runaways, vol. 3 in stores on Apr. 23, 2019.

Read the first chapter of Rainbow Rowell and Faith Erin Hicks' Pumpkinheads below & be sure to pre-order today.

Pumpkinheads is available for pre-order today from your bookseller of choice. Find it in stores on Aug. 27, 2019.