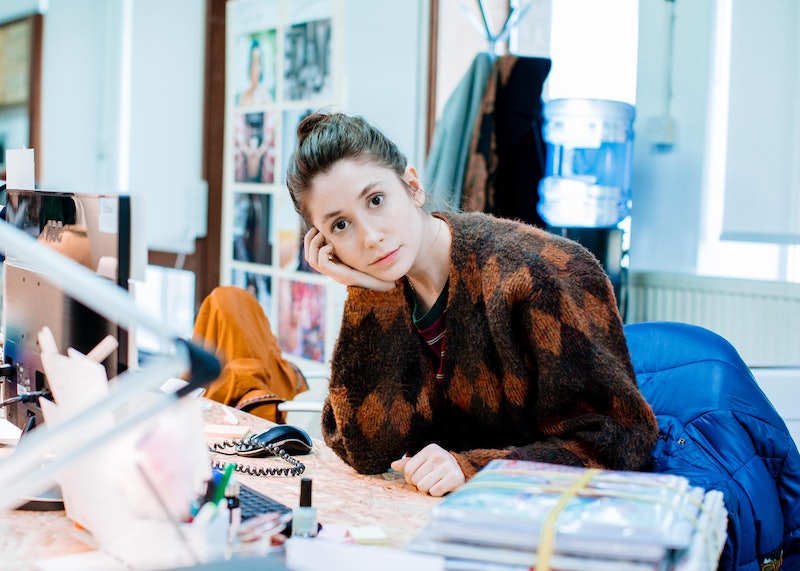 Imagine if your mind wasn't your own. But was at any moment vulnerable to an assault of intrusive, irrational thoughts, and images of a sexual nature. Whether it's visions of your family members doing explicit things, fellow Tube-goers getting it on in a crowded carriage, or your new boss standing totally naked in the lift next to you. Well Marnie, the protagonist of new Channel 4 comedy Pure, doesn't have to imagine.

Marnie has Pure O, a type of OCD characterised by intrusive thoughts that can relate to everything from self-esteem and sexuality, to relationships and responsibility. But unlike the physical form of OCD with which most of us are familiar, as OCD UK notes, the compulsions performed by those with Pure O aren't visible to others.

The character is played by Charly Clive, and the Channel 4 drama is her breakout role. Before she was an unknown comedic actor creating videos with her best friend online. As the Guardian reports, it was these videos that led to her discovery by Pure's producer Jen Kenwood. She talked to me about her experiences learning about Pure O and seeing the world through Marnie's eyes.

"Initially it was just googling because I'd never heard of Pure O before it. I knew what OCD was or at least I thought I did, but I didn't know anything about Rose's kind so that was enlightening."

She says her best resource for understanding the condition was Rose Cartwright, who provides the inspiration for the character of Marnie. Pure is based on Cartwright's memoir of the same name about her experiences as a young women living, working, and travelling all while dealing with Pure O.

Clive explains, "The circumstance of the condition and the character is based on the memoir. I felt definitely some responsibility to the condition, to portray someone with Pure O as authentically as I could. I was very lucky because I got to have a personal relationship with Rose Cartwright, who wrote the book, so I was able to ask for guidance when needed."

Although Clive hasn't experienced Pure O herself, she notes that it didn't stop her identifying with Marnie, as you shouldn't need to be experiencing someone's exact struggle to be able to relate.

"It's not just Marnie who feels she's different within her community. All of the characters have something they feel they don't know how to talk about particularly well." she says. "And actually Marnie's honesty helps everyone open up a little bit. We don't have to have the same insecurities, or anxieties, or things going on with us to be able to relate to someone's struggle and I think that's a really important message."

Clive knows a thing or two about struggles, as the comedy career that led to her getting the role of Marnie was kick-started when she was diagnosed with a brain tumour back in 2015, as i-News reports. She dubbed her tumour Britney and used at as the inspiration to write an Edinburgh Fringe show with her best friend Ellen.

However, Clive, who hails from "Oxford by way of Virginia," tells me it's not this struggle that she felt bonded her the most with Marnie as a character. "So when I got the role I was living in America in the time so I moved back for it. I'd never lived in London before and the whole Marnie coming to London and not knowing what it is was something I was going through at the same time. That I feel I could really relate to — that feeling of being a fish out of water."

Clive hopes that this will help viewers go away with a more nuanced idea of the realities of Pure O. "I think hopefully the thing that people will be struck by is that it's real. The reactions that characters have are all grounded in truth. If you suffer from something like Pure O, you're looking for ways to feel as normal as possible, so that's what your life becomes, [not] how do I cure myself but how do I live my best life."

And of course she wants the series to open up the conversation around Pure O, OCD, and mental health more widely. "There's a lot of taboo around talking about mental health but there's also a lot of stereotypes, which means that as soon you say OCD people think they know what you're talking about.

"To be part of as show that's really nuanced and shows the personal account of what it's like to have a condition like this is something that's really exciting and that will hopefully open lots of platforms for people to talk about it."

Pure airs on Channel 4 on Wednesdays at 10 p.m.