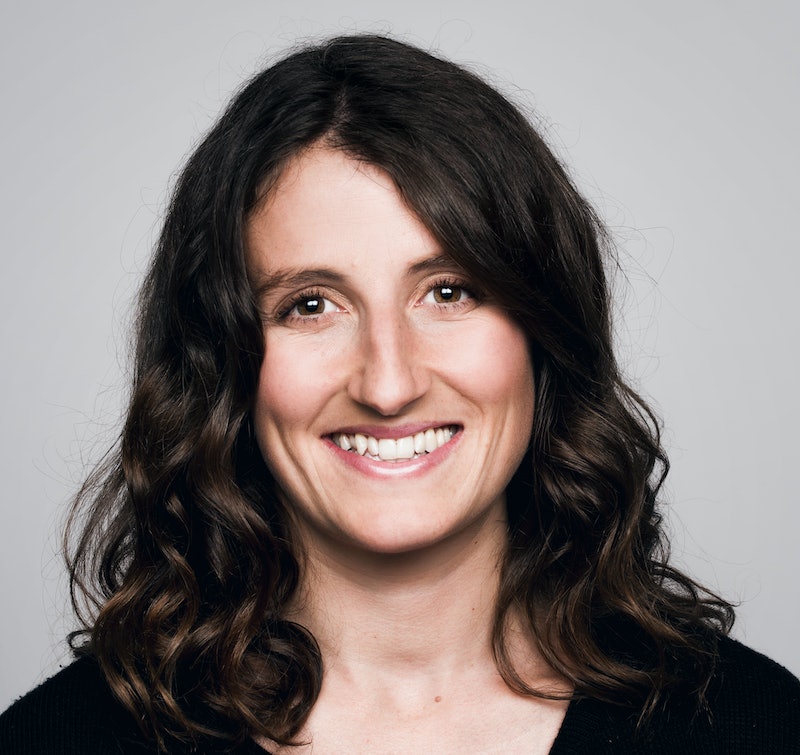 Stepping into the QI office in Covent Garden, everything is exactly as you imagine: walls lined with books, a group of people tapping furiously at laptops in a small attic-like cove, pictures of Stephen Fry, Sandi Toksvig, and Alan Davies everywhere. The fuel of choice is tea, and lots of it. During my 60 or so minutes in the office, I’m offered tea three different times by various team members. Or elves, as they’re known.

Anna Ptaszynski — the QI elf I’m here to meet — is very specific when it comes to her tea order: it needs to be strong, the bag having been left to brew for several minutes, but with a lot of milk to balance it out. I ask for the same. After all, she’s a QI elf; I’m guessing she’s done her research.

Along with acting as the fact-finding headquarters for the BBC’s most gentle quiz show, this office is home to the studio in which QI’s spin-off podcast, No Such Thing As A Fish, is produced. Every week, four of the elves (Ptaszynski co-hosts with James Harkin, Andrew Hunter Murray, and Dan Schreiber) share their favourite facts from the last seven days of research.

For the uninitiated, it may come as a surprise that a format as seemingly dry as this captures the attention of 1.5 million dedicated listeners every week, but that’s where the genius lies. The facts themselves are often too bizarre to be boring, and even the slightly more mundane ones are made interesting by the elves’ enviable wit.

Ptaszynski and I sat down with our teas to chat about the team’s new book, The Book of the Year 2019, her favourite ever fact, and what Stephen and Sandi are really like behind the scenes.

Rowena Henley: Can you tell me the story behind how you got the nickname the QI elves? I’ve heard a few different versions.

Anna Ptaszynski: Stephen Fry, back in the day, referred to us as the little elves who were sorting facts and living at the bottom of his garden, or something like that, and it just stuck. So, yes, it was Stephen. He kind of inaugurated us back in the early series.

RH: I see. This may be a really hard question after more than five years of the podcast, but can you recall your favourite fact you’ve ever shared on No Such Thing?

AP: It changes constantly, but my go-to is always the fact that James Garfield, the U.S. president, ate everything through his anus for the last four months of his life because he'd been shot and he couldn't digest food properly. And according to the doctor’s report, he had things his favourite things, like champagne and omelettes, siphoned up his bum.

RH: Wow. And I know you have a very fastidious listenership. What’s the weirdest listener comment or complaint you've ever had?

AP: Well I kind of think the nice thing about it is we're in this weird bubble with the podcast. I think, because we don't really take a stance on things, and we just want to share interesting stuff, everyone is really nice.

But there was that notorious time when I said that da Vinci made huge sculptures out of marzipan. And this was really interesting actually because this is everywhere. If you look it up, it says everywhere that he made huge tall towers and horses and carriages all in marzipan. It’s because da Vinci he wrote all these famous journals, and someone had faked a journal in the 1980s, and it looks incredibly real. It's online everywhere and no one really spots that it's not true. Until this one academic wrote to me and said, by the way, this is a fake a hoax journal from the ‘80s that somehow caught on.

RH: Do you ever get recognised while you’re out and about?

AP: We did a bit more when we did a TV show called No Such Thing As The News on the BBC. Occasionally, when we're all together and people hear our voices next to each other they’ll be like, “Oh that’s them.” So if we're all together in a pub then people will come up and say hello. It's the perfect level of recognition where, I imagine, if you're actually a famous person, maybe it's annoying, but, when it is just the occasional moment, it’s a lovely ego boost with none of the irritation.

RH: So, do you hang out a lot? Are you really as good friends as it seems?

AP: No, I can't stand them [laughs]. No, we are, yeah. Probably one of the things that works about it, even though I'm loath to say it, is that we do all happen to get on incredibly well. It's bizarre and we're all really different. Although I don't know how much that comes across. People are always confusing the guys. It's useful being the only girl, because they know which one I am.

RH: But everyone's got such distinct accents?

AP: I agree. And quite distinct characters. So obviously Dan is the kind of like jokey one, You know, it’s has he got his facts right? Does he believe in Yetis? No, he doesn’t. Stuff like that. And then Andy has got that plummy thing going on. I'm the girl. James is your science-y elf.

RH: I know you guys often invite guests on. Who would be your dream guest, alive or dead?

AP: So Dan is the one who loves the idea of getting guests on and Dan has heroes.

Dan Schreiber: [Walking in] What’s this?

AP: Yes. I'm actually speaking for you. I'm saying who your dream guests would be. Do you know who I'm going to say?

AP: Oh no, I wasn't actually. I forgot, you’re a super fan. I was going to say Clive James.

AP: Is he only eighty? I thought he was way older than that.

DS: No, I think he just turned the day before yesterday.

AP: Well, let's invite him on as a birthday present to him.

RH: Have you thought of yours?

AP: The first person who springs to mind, weirdly, is Jimmy Carter. I kind of love him and I've always thought he's the best underrated president and also has lots of other weird interests. He does woodwork now and he makes these huge items of furniture. Oh, hold on, I think I would maybe go with Ben Franklin. Someone who was just a real polymath from history. I think it was at Ben Franklin who invented crazy fun stuff. Like invented a lever so that he could open his bedroom door from his bed, but then also obviously did amazing things... like was one of the founders of America and stuff. Someone like that.

AP: Apparently so. A bit weird.

RH: It would be quite interesting if you had Donald Trump on the show.

AP: Yes. I'm not sure how good a listener he is.

AP: We've got an entry in our book this year, actually, is it under “golf.” I think it is about Trump. [Opens the book.] Oh, here we go. So basically, his form on the golf course and it just reveals what he's like as a golfer and he's just this horrendous cheat. It's unbelievable. So he claims to have won 18 club championships in his career and that is because whenever he opens a new course, he plays the first round against a single mate so they can deliberately win. He's always like planting balls in places. He used to keep a can of red spray paint in his golf cart and he'd mark a red cross on every tree that he hit. So staff would chop it down. So as soon as he's accidentally hit a tree, it's like, get rid of that tree. I don't want to see that tree anymore.

RH: So tell me about the book. So I know you say you don't remember it, but is it very different from the others?

AP: Well, we’re most excited about is we've done these like double page spreads. They're new, and they’re looking quite sexy. And also, we've all got our own sections. We haven't done this before, inserting ourselves into the book a bit. So we all have our little bugbears or bits of the news that we're into. So James has a massive fear of mushrooms, so he has written this article about how fungi are evil. One of mine was about The Independent Group and how they've had so many names. It had something like 11 names by the end.

RH: Wow, it must have been so fun to put together. And being an elf in general must be amazing.

AP: It is! No one leaves. It’s a really great job.

RH: Can I ask about Sandi and Stephen? Are they really that nice, funny, and smart?

AP: No, they are just bastards [laughs]. No, sadly, they are all of those things, really disappointingly. So yes, Sandi is absolutely fantastic, as was Stephen. They had very different working styles.

AP: Well, they’re very similar in that they have huge brains that are capable of assimilating massive amounts of information and retaining them, but Stephen is, I would say, very confident, so could wing it quite easily. We'd be recording QI, and he could come in that day, we’d shove a bucket load information at him that he basically haven't seen before, he'd skim it, and then suddenly he talked he'd suddenly know more about it than anyone else. Which is incredible. And Sandi is, she's so diligent, it's unbelievable. So for the research period, she insists on coming in for loads of the meetings. She has a huge hand in writing the script. So when you watch QI now, she's added so many facts and rewritten loads, and she just loves it. She's really passionate about QI.

RH: Do you watch the Bake Off? I was wondering how you think she’s different on that.

AP: I think she thinks of them very differently. QI is more her, I think. I think she loves Bake Off because it's fun, but she just loves information and educating people so much. But, look, I'm sure she tells the Bake Off people that she prefers them...

More like this
Everything To Know About The 'Daisy Jones & The Six' TV Series
By Maxine Harrison and Brad Witter
Your Guide To Watching 'Everything Everywhere All At Once' In The UK
By El Hunt and Sophie McEvoy
The Song At The End Of 'The Last Of Us' Ep 1 Has A Deeper Meaning
By Sophie McEvoy
Molly-Mae & Tommy Fury Revealed Their Baby Girl's "Really Unusual" Name
By Sophie McEvoy and Sam Ramsden
Get The Very Best Of Bustle/UK
Sign up for Bustle UK's twice-weekly newsletter, featuring the latest must-watch TV, moving personal stories, and expert advice on the hottest viral buys.