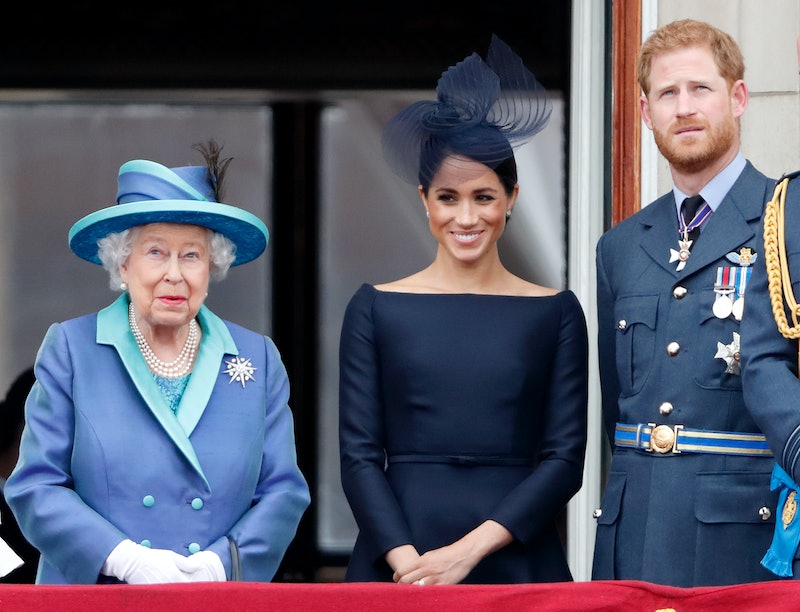 After the historic family meeting at Sandringham on Monday, Queen Elizabeth issued a statement about Prince Harry, Duke of Sussex, and Meghan, Duchess of Sussex's decision to step back from their duties as senior members of the royal family. In her statement, the British monarch made it clear that while it was never her wish for her grandson and his wife to step down, she is supporting them in every way she can. However, she also acknowledged that the particulars of what this means for Harry, Meghan, and the rest of the royals moving forward are still being worked out — but she wants an agreement to be reached sooner, rather than later.

The statement, which the queen shared on the official royal website, begins, "Today my family had very constructive discussions on the future of my grandson and his family. My family and I are entirely supportive of Harry and Meghan's desire to create a new life as a young family. Although we would have preferred them to remain full-time working Members of the Royal Family, we respect and understand their wish to live a more independent life as a family while remaining a valued part of my family."

Meghan and Harry's announced via Instagram that they planned to become financially independent and split their time between the UK and North America last week. Quickly following the post, reports indicated that Buckingham Palace was "blindsided" by the news, per the BBC. Shortly after the announcement, the Palace issued its own statement that read, "Discussions with The Duke and Duchess of Sussex are at an early stage. We understand their desire to take a different approach, but these are complicated issues that will take time to work through."

The queen's new statement also addressed Meghan and Harry's desire to be financially independent — which is a particularly tricky area since it could impact the couple's security. "Harry and Meghan have made clear that they do not want to be reliant on public funds in their new lives," she said. "It has therefore been agreed that there will be a period of transition in which the Sussexes will spend time in Canada and the UK." The Queen concluded, reminding us all that this will not be an easy or simple evolution for the Royal Family. "These are complex matters for my family to resolve, and there is some more work to be done, but I have asked for final decisions to be reached in the coming days," she said.

As the royals continue to work together on Meghan and Harry's new roles, they also appear to be presenting a united front when it comes to shutting down press speculation about in-fighting. On Monday, before the meeting at Sandringham, Harry and his brother, Prince William, Duke of Cambridge, issued a rare joint statement of their own.

On Sunday, the British paper The Times ran a story that suggested William was "bullying" Harry, which the story alleged led to Harry and Meghan's decision to step down as senior members of the royal family. However, the brothers have said the story is false. "Despite clear denials, a false story ran in a U.K. newspaper today speculating about the relationship between The Duke of Sussex and The Duke of Cambridge," the statement said, per People. "For brothers who care so deeply about the issues surrounding mental health, the use of inflammatory language in this way is offensive and potentially harmful."

The flurry of statements from the royal family suggest that while Meghan and Harry's decision wasn't ideal, it has turned the family into a united front as they work together to make the Sussexes' transition as smooth as possible for everyone involved.

More like this
Lilibet & Prince Charles’ First Meeting Was Emotional, According To Reports
By El Hunt
Olivia Rodrigo’s Song Dedication To 5 SCOTUS Justices Sent A Strong Message
By Grace Wehniainen
'Stranger Things' Star David Harbour Has This Actor In Mind For A Hopper Spinoff
By Alyssa Lapid
'Stranger Things' Star Sadie Sink's Love Life IRL Is Nothing Like Max's
By Alyssa Lapid
Get Even More From Bustle — Sign Up For The Newsletter