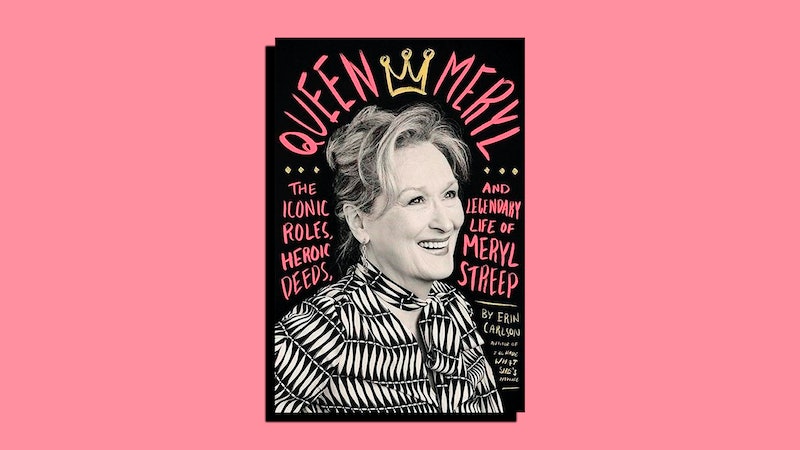 If you ask anyone to name the greatest actors of our time, chances are pretty high you'll hear Meryl Streep's name among them. In the four decades since her stage debut in 1975, Streep has become synonymous with excellence; she is an iconic and endlessly celebrated actor and performer, with 21 Oscar nominations, the most in history, to her name. In her new book, Queen Meryl, writer Erin Carlson explores just what makes her so universally revered.

"I wanted to spotlight another powerful woman in Hollywood — but one who works in front of the camera," Erin Carlson, who wrote about Nora Ephron in her first book I'll Have She's Having, tells Bustle. "I was interested in discovering more about the elusive, reclusive icon, who is intensely private and hides behind the roles she plays on screen. Part of the fun of writing biographies is piecing together the puzzle of someone's personality. Meryl is not so easily defined, and that intrigued me. My central question: How did Meryl Streep become Meryl Streep?"

To find out, Carlson spent nine months wading through decades worth of articles and books written about Streep, interviewing co-stars and crew from some of Streep's most pivotal roles (including The Devil Wears Prada's director David Frankel and Kramer vs. Kramer director Robert Benton), and watching all 60 of her films. Through her research — which covers Streep's life from 6-years-old to present day — Carlson discovered that "Meryl shares traits with many of her most indelible character portraits," even Miranda Priestly.

Interestingly, many of those traits that have made Streep so beloved among her peers and fans — from fighting ageism and sexism in Hollywood to fully immersing herself in the art of understanding the complicated women she portrays — are shared by the subject of Carlson's first book, the late Nora Ephron, with whom Streep collaborated three times, including on Ephron's final film, 2009's Julie & Julia.

"Meryl was very different from Nora; Where the latter held strong opinions, often black and white, on literally everything and relished sharing them in public, Meryl tends to keep her views hidden," Carlson says. "The less people know about her, the more easily she can slip into and out of roles. All the same, both had tremendous ambition, both often worried and felt bad about not being beautiful enough. While looks-obsessed Hollywood grated on them, their talent shined through — and now they are beloved as aspirational figures."

Carlson was also surprised by a revelation from her research: "Meryl definitely likes to gossip! That she shared in common with Nora, who loved to keep tabs on other movers and shakers in her orbit."

Although Carlson argues that Streep keeps her opinions closely guarded, since the the 2016 election, Streep has spoken out about Trump's policies on more than one occasion, including at 2017 Golden Globes ceremony, prompting the social media-obsessed president to attack the actor on Twitter. After the Harvey Weinstein sexual assault allegations rocked Hollywood in 2017, Streep was also targeted by a right-wing guerrilla artist who affixed posters throughout Los Angeles that accused the actress of knowing about Weinstein's abuse and keeping it quiet. Streep released a statement in Dec. 2017 denying any prior knowledge of Weinstein's actions, and Carlson, for one, believes her.

"The intention there was to divide feminists and weaken the movement for radical change, targeting Meryl with a false rumor," Carlson says. "The truth is, Harvey Weinstein was frightened of Meryl. Abusers hide their tracks, especially from people they respect and fear as equals. Given her long history as an advocate for women and women's right, it doesn't make sense that Meryl would have stayed silent if she knew what Weinstein was up to, including his covert efforts to surveil his victims."

For Carlson, examining the lives and careers of women creators has driven home one of the Streep's most outspoken beliefs: That it's crucial to continue lifting up women's voices, and allowing them space to tell stories that are messy, relatable, and real.

"Sure, each woman has ambition and drive, but the most important quality they share in common? Perseverance. All are survivors, deftly navigating ups and downs in their personal and professional lives. Despite setbacks, they always come out on top. That's part of what fans adore about them," Carlson says. "They've been through some sh*t, and pour their joy and pain into their art, which is more powerful for it."

More like this
Robert Downey Jr.’s New Film Is A Tender Story of Fatherhood & Forgiveness
By El Hunt
How To Stream 'She Said' In The UK
By Maxine Harrison
Allie Rowbottom Will Have Her Feminism With A Side of Botox
By Samantha Leach
The 'Lady Chatterley's Lover' Book Leaves Us With A Troubling Question
By Catharina Cheung
Get Even More From Bustle — Sign Up For The Newsletter