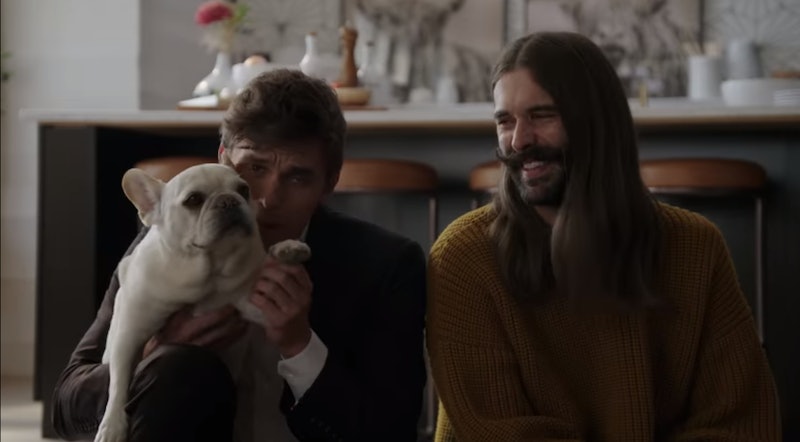 On Thursday, Oct. 3, it was announced on Instagram that the Queer Eye dog Bruley died at the age of 10. Bruley's owner and Queer Eye producer Michelle Silva shared the news with followers of the French Bulldog's Instagram page. Her beloved pet had heart issues, according to Silva. Since Bruley's passing was shared, the pup's Queer Eye family has been offering their condolences on social media.

Bruley joined the Queer Eye cast in Season 3 when the series filmed in Kansas City, Missouri. In a March interview with Decider, Silva shared that she brought her pet along with her during filming, and he began wandering down the hall into the Queer Eye guys' loft. Bruley's frequent visits to the loft led to his recurring appearances over the course of the last two seasons.

Bobby Berk was one of the first to share a tribute to Bruley. He posted a photo of himself and the pup on Instagram, and wrote, "RIP my furry little friend. You brought joy to so many with your jump kisses, grunts and even your farts. You were the best little sidekick we could have had. You will be very missed by all including your mama @tinsely_ who my heart goes out to right now. I love YOU #bruleybru."

On his Instagram Story, Berk's Queer Eye co-star Antoni Porowski shared Silva's post, and added, "Rest in puppy peace, because all dogs go to heaven, little one." Meanwhile, the official Queer Eye Twitter account sent condolences to Silva with a special tribute to Bruley and his time on the show.

In her post, Silva shared memories of Bruley, who she wrote that she brought home when he was just nine-weeks-old. "Over the course of 16 episodes of @queereye, in just a few moments on screen, you guys all got a glimpse of the Bru I knew and loved. He was hilarious, stubborn, sometimes inappropriate, and always a sucker for a snack. He was pure love," the Queer Eye producer wrote.

After appearing in the loft segments on Queer Eye, Bruley became a fan favorite for his scene (and snack) stealing ways. His Instagram page currently has 293,000 followers, and Silva reassured them that the French Bulldog's account will remain active. The producer revealed that she wants to share her experience dealing with Bruley's heart failure diagnosis to raise awareness about the issue which affects many dogs and their owners. Per the Pet Health Network, 10 percent of all dogs in the United States have heart disease, and that statistic only makes hearing about caring for a dog with a heart-related illness all the more invaluable for pet owners.

In addition to keeping his Instagram running, Silva also revealed that she hopes to honor Bruley's memory by potentially selling merchandise to benefit nonprofit organizations and getting involved with bulldog rescue centers. She ended her post by summing up how much Bruley meant not only to her, but to the Queer Eye community, "There is so much Bru inspired, and it's so much bigger than I even realized."

More like this
Why Simone Ashley Had To Study Snails For Intimacy Training, Pre-‘Bridgerton’
By Grace Wehniainen
Julie Andrews Revealed A Surprising Behind-The-Scenes 'Bridgerton' Detail
By Grace Wehniainen
Who Is 'Umbrella Academy' Star Elliot Page Dating After His Divorce?
By Jake Viswanath
Move Over, 'Sunset'! The Drama-Filled Trailer For 'Selling The OC' Is Here
By Nola Ojomu
Get Even More From Bustle — Sign Up For The Newsletter