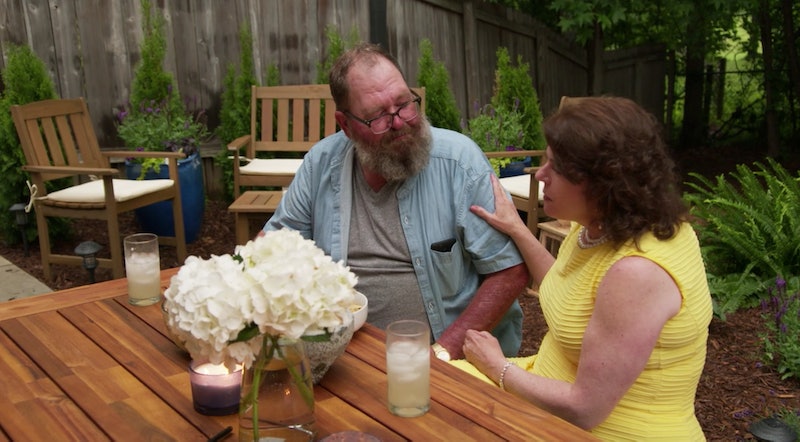 Careful that you don't get whiplash of the heart from this news, but Queer Eye's Tom and Abby are back together. (Again.) It seems like just last week that we were reporting the opposite — probably because it literally was — but the car enthusiast posted an update to his Twitter on Tuesday that has fans believing in love again. Under a photo of himself and his ex-wife Abby holding each other close and smiling for the camera, Tom Jackson reassured his followers that their most recent separation was not permanent, and that the ex-spouses had found their way back together.

"So happy to say that Abby and I are reunited," the Alabama-native effused, adding, "We’ve loved each other for many years and want to spend the rest of our lives together!!!!!!!!" Tom's particular phrasing certainly suggests the possibility of another marriage down the line, if these two really are intent on spending eternity together. But for now, he hasn't offered any other details to help explain what made the two of them change their mind, or what this means for their future.

Then again, he is wearing one of the outfits that Tan France upstyled for him, which might have something to do with the reunion. And he did also make sure to sprinkle in plenty of emojis, in what we've come to recognize as the dump truck driver's signature style.

But most fans didn't seem to mind the lack of specifics. Less than a day after its Mar. 6 posting, the tweet had already garnered over 45,000 likes, so this love story is clearly a special one to fans of the Netflix reboot. Audiences first fell in love with Tom during his Season 1, Episode 1 appearance on the Queer Eye reboot. But it was clear his mind and his heart was already taken, so fans would have to get in line.

The makeover subject gushed over his ex-wife Abby throughout the episode, keeping her in mind every time a change was suggested. "I love Abby more than anything," he told the Fab Five, "She says she loves me, I know I love her." When his wardrobe was upgraded, it was so that Tom could prove to his former partner that he was willing to put in as much work as she was. When he learned a recipe, it was so he could make it for Abby. When his house was revamped, it was so he could invite Abby over to take a look, and show off all the literal and metaphorical space for her he'd made in his life.

The pair left the show with dinner plans on the calendar and a series of arm touches that seemed to spell out good things for them going forward. But sometime between when the show wrapped during Summer 2017 and his update at the end of February, the two apparently hit another stumbling block. On Feb. 27, Tom updated his 10,000 followers with the sad info that he and Abby were no longer an item.

It's unclear how many times the former husband and wife had parted ways by this point, but the love is clearly strong between them. That was the silver lining of the post: just how much love and respect Tom still had for his ex-wife, even though they were no longer together.

It's the kind of heartwarming, amicable split that leaves equal room for a lifetime of friendship or a romantic reunion, and fans were delighted on Tuesday to receive the latter. With the amount of back-and-forth we've already seen from this couple in just a few short months, it's quite possible that they might call things off again. So dare to dream, but don't stay too close to the edge of your seat, because the emotional whiplash involved in following the love story of these two might just do you in.