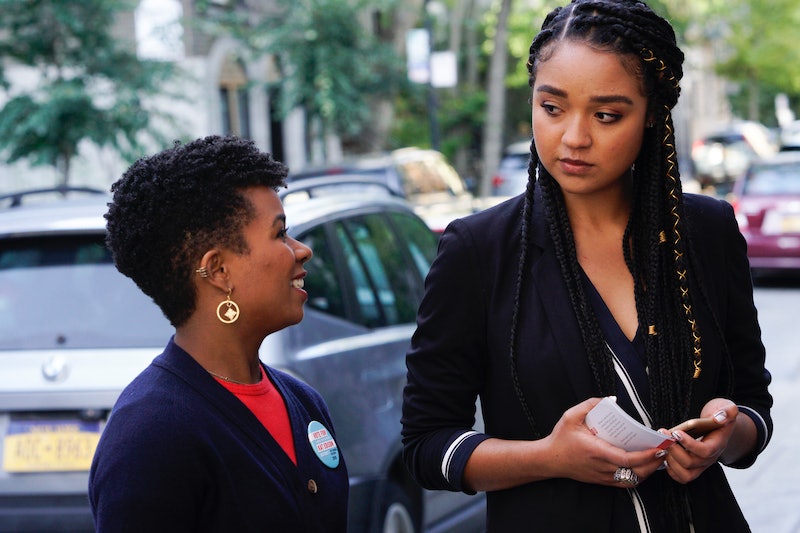 Representation isn’t just about who is on TV, but about what is being discussed and how. While states across the country seem to be putting more restrictions on abortion access nearly every day, it's doubly important to talk about this health issue in a way that represents the experiences of the people it affects. To explore these important nuances, the collaborative research group Advancing New Standards in Reproductive Health (ANSIRH) has released its 2019 report on how abortion is represented on television and in movies. The report found that storylines about abortion on TV were overwhelmingly white, but there was one ground-breaking, if brief, portrayal of two queer Black women discussing their abortions on Freeform’s The Bold Type.

In 2018, the ANSIRH report found that several shows (like Empire, Dear White People, and Claws) featured Black women having abortions surrounded by a supportive found family. However, the 2019 report demonstrated that TV shows this year shifted away from focusing on the experiences of Black women and women of color more generally, though there were over twice as many depictions of abortion in 2019 than in 2018. Netflix’s Orange is the New Black included a plotline about the experience of a Guatemalan character trying to get an abortion while undocumented and incarcerated, and Amazon’s Made in Heaven showed the first South Asian woman to disclose a past abortion onscreen, according to the report.

The Bold Type went further than these depictions, though. In the scene, one of the show's main characters, Kat Edison, discusses having had an abortion with her City Council campaign manager, Tia Clayton, also a queer Black woman, when someone threatens to use Kat's abortion story against her on the campaign. Tia reveals that a crisis pregnancy center "tried to convince her not to have an abortion," the report says.

According to Steph Herold, MPH, a data analyst at ANSIRH, this conversation in The Bold Type subverted harmful stereotypes about queer women of color and abortion. “Yes, contrary to their absence onscreen, Black queer characters do have abortions,” she tells Bustle. “The characters don’t regret them — both [queer Black women] talk about their abortions as being the best decisions for them. And yes, sharing their abortion experiences with each other brings them closer together.” Breaking through these stereotypes is extremely important, because they deeply impact queer women of color’s access to abortion in real life.

The Bold Type showing a discussion between queer women of color, specifically queer Black women, having abortions was an important milestone in itself. Women of color are often targeted by anti-choice advocates and organizations like crisis pregnancy centers, which often use misleading tactics to prevent people from accessing abortion care, and Kat and Tia's conversation showed how they supported one another after being targeted for abuse for their experiences with abortion.

And while overall, the ANSIRH report found that 65% of the TV characters in 2019 who obtained abortions were white, when in reality nearly 65% of people who obtain abortions are people of color, according to the Guttmacher Institute, making reproductive health and its media representation a particularly high-stakes issue for communities of color.

“Some CPC networks have specific 'urban initiatives,' their code for programs that target communities of color, and use racist language in an attempt to persuade Black women not to have abortions,” Herold says. “These initiatives double down on racist tropes, preying on people in a vulnerable moment who are looking for medical information, not religious manipulation.”

Affirmative medical information and care is often hard to come by for queer people of color to begin with, according to the National LGBTQ Task Force, which found in 2019 report that queer people are more likely than straight cis peers to be under- or uninsured, leaving around 40% of trans people of color unable to seek medical care due to cost barriers.

“Queer women of color, trans folks, and non-binary folks face so many barriers to accessing healthcare,” Herold tells Bustle, “and because abortion is uniquely stigmatized and overregulated, it makes accessing care even more difficult.” Because trans people, especially trans people of color, are much less likely to have equitable access to health care and more likely to have lower incomes than white cis peers, pregnant trans men and nonbinary folks face significant barriers to going out of state to seek the healthcare they need.

“The lack of queer characters of color getting abortions on screen may convey the false idea that this population do not need access to abortion,” Herold says. “It may also result in real queer folks of color who do have abortions to feel alone, isolated, or judged.” Hopefully, conversations like those started on The Bold Type will help queer people of color who have abortions know that they aren’t alone.

More like this
Matt Hancock's “Cringe” Jungle Karaoke Left Twitter Reeling
By Sam Ramsden
Here’s Everything Coming To & Leaving Netflix In December
By Jake Viswanath
6 Unexpected Causes Of Post-Workout Fatigue
By Carolyn Steber
I Visited Remedy Place, The Social Club Transforming The Wellness Industry
By Rachel Lapidos
Get Even More From Bustle — Sign Up For The Newsletter