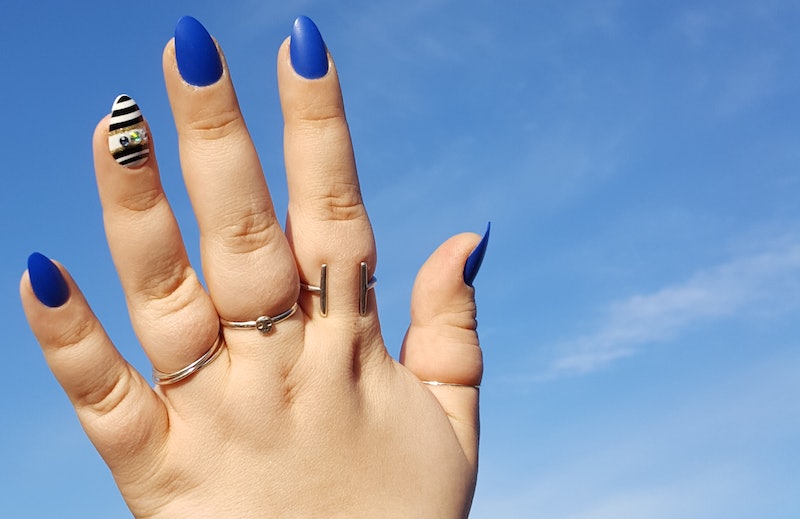 When I’m around a cute girl, I’m always aware of my hands. No, I’m not obsessing over where they are in relation to her skin. I’m internally preoccupied by the way they look. Hands tell a lot about a person. When you are wondering about a person’s relationship status, you look for a ring on their left hand. When you see tattoos on someone’s hands, you know they are probably at least a little edgy. And, for queer women, when you see stiletto acrylic nails on a woman’s hands, you probably assume she is straight.

The obsession around fake nails for queer women has to do with one thing — sex. Since sex between two cisgender women often involves digital penetration, short nails are considered “standard” for all queer women. By many, they are considered safest for sex.

Short nails, then, have become a “tell” for a figuring out a woman’s sexuality. That’s why my hands always occupy some place in the back of my mind when I see a cute girl: because I am a queer woman whose hands look straight, at least to many other queer women. That’s because I love fake nails. And I'm not alone.

"I feel like long fake nails are a crucial part of my femme identity and without them, I don't feel like me," plus size fashion blogger and Ready to Stare founder Alysse Dalessandro says. "My nails are one way that I express my personal style and femme identity no matter what I am wearing."

As a femme, I am accustomed to my queerness often being erased by my feminine appearance. Women who like women are often confined to social stereotype when it comes to style, and that is even true in queer communities. If you like women, you are "supposed" to be butch. You are supposed to let everyone — including other queer women — know about your queerness by cutting your hair short, cutting your nails shorter, and cutting the sleeves off your closetful of plaid flannel. But many femmes don’t adhere to that expectation. Especially those who love a good mani.

"As someone who leans femme, I love having long nails to paint," 22-year-old Radhika, who identifies as queer, says. "I like how they look with the rings I wear, and they feel powerful and assertive on my hands, in a way. Since they're natural, they're not as long as acrylics can be, but longer than the fairly short 'lesbian standard.'"

The obsession with nails is somewhat of an inside joke in the community. Iconic queer website AfterEllen even did The Great AE Nail Survey in 2014 to talk about queer women’s nails. In that survey, 90 percent of women said their nails were short. Only 4 percent reported having long, polished nails — nails like mine.

On one episode of The L Word, the girls are trying to figure out if Dana’s crush is a lesbian. Shane’s first word of advice is to look at her fingernails.

“Are they long or short?” Shane asks.

“They're long and polished. So she's…” Dana trails off.

While Shane won’t write the crush off as a straight woman, the first way she thinks of to decode a woman’s sexuality is simply by glancing at her nails. Manis are just that defining to queer women.

This means being a queer woman with long nails comes with a lot of stigma. My long nails, for instance, are always a topic of conversation with other queer women. My queer friends have often joked about my affinity for acrylics, saying, “At least women will know you’re single.”

My sets have come up on first dates, on causal hangs at queer bars, and at almost any queer-coded event. The stigma around fake nails in the queer community is just that pervasive.

"You see long nails, and you think, 'Those might hurt in certain places during sex,' or, 'That person must be a pillow princess, because there's no way they can penetrate someone with those,'" Radhika says. "I wouldn't blame anyone for worrying, but people quickly find that those suspicions aren't true. If someone knows what they're doing, the length of their nails won't actually matter. I've never gotten any complaints."

But the obsession with nails isn’t entirely unwarranted. Last year, GO Magazine contributor Zara Barrie wrote about struggling to get away with long nails as a lesbian woman. Barrie recalled that after getting “long as fuck, dangerously sharp acrylic claws” some years ago, she ran into some trouble during her next sexual experience with a woman.

“Within seconds of hooking up, the girl screamed, ‘OUCH! Those nails!’” Barrie writes. “I sheepishly removed my hand from down her designer denim pants and gave her oral sex instead.”

That was the end of Barrie’s long nail days. But queer woman who are drawn to fake nails have found creative ways to keep their power nails while still protecting their partners.

Some women say cotton balls and rubber gloves do the trick, placing the cotton over their nails to soften the harsh acrylic. Plus, wearing gloves is also a form of protection for queer women, preventing vaginal fluids from entering the bloodstream through cuts on the hand. Others get “lesbian manis,” which features all long nails except the forefinger and middle finger which are cut short. Somewhat silly looking, but effective — and kind of hot. Others insist that nails without sharp points are just as safe as shorter nail. It’s just a matter of being aware of your nails.

"Recognizing that fake nails are a personal choice is so important, and having them doesn't make you any less queer," Dalessandro says. "Judging someone and their sex life based solely on the length of their nails is definitely something we need to leave behind and let people just live."

For me, I feel my sexiest and most powerful at my most feminine — and that includes filing my stiletto nails to a point. And while my nails may seem to erase my queerness at first, I really feel my most queer at my most feminine. After all, how many queer women do you see with long nails? It doesn’t get more “queer” or subversive than that.

As for sex, don’t worry, ladies. I have claws and I know how to use them — safely.

More like this
Jelly Nails Are Officially Trendy Again
By Kali Borovic and Audrey Noble
Ayurvedic Principles & Family Are At The Root Of Fable & Mane
By Justine Knight
Not Sure How To Style Bangs? Make These Easy Hairstyles Your Go-To
By Olivia Rose Ferreiro
15 Dreamy Perfume Gift Sets For Every Fragrance Lover On Your List
By Shea Simmons and Olivia Rose Ferreiro
Get Even More From Bustle — Sign Up For The Newsletter