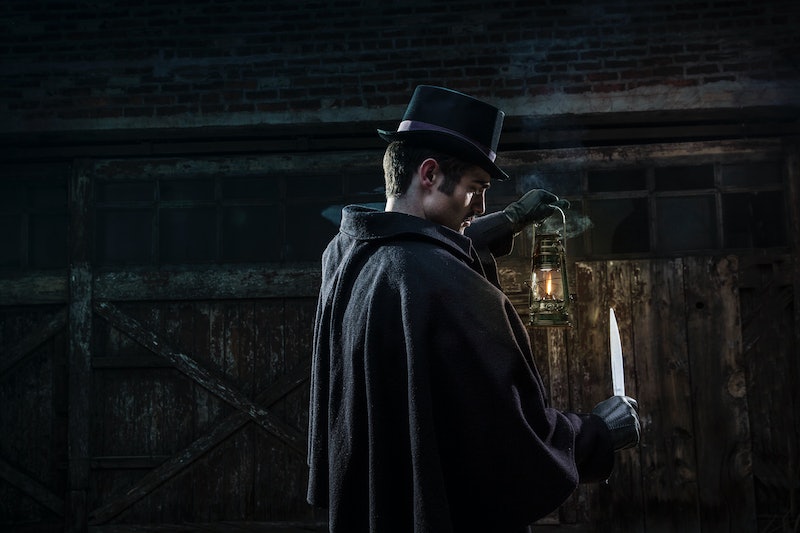 American serial killer H.H. Holmes with his Chicago "murder castle" did enough heinous acts during his lifetime to gain notoriety for decades, but an ancestor of his is out to prove that he could have been even more murderous. The eight-part History show American Ripper will investigate if Holmes and Jack the Ripper were the same person. This Holmes-Jack the Ripper theory is controversial — and, as The New York Times notes, probably won't be proven in American Ripper — but something that's known for a fact is that Holmes wrote a memoir while he was alive. While it should be stated that not many actual facts exist in his account, Holmes' prison memoir, Holmes' Own Story, gives some fascinating insight into one of the most notorious minds of American history.

The most notable quote by Holmes — who was born Herman Webster Mudgett — is, "I was born with the devil in me." But what he wrote in his prison-penned memoir is not as well-known since he used Holmes' Own Story to deny his involvement in any murders. As writer JD Crighton notes in the introduction of her published version of Holmes' Own Story, the memoir was his attempt to prove his innocence in the death of his business associate Benjamin Pitezel, which was the murder for which he was sent to prison. After his conviction, Holmes wrote a confession that was published in The Philadelphia Inquirer on April 12, 1897 — nearly a year after he was hung to death, according to philly.com. In his confession, he said he killed 27 people, so it's understandable that this is remembered more than Holmes' Own Story.

The Library of Congress has Holmes' Own Story available as a pdf for anyone to view. But if you'd like just a glimpse of his twisted mind before embarking on American Ripper, here are some of the most interesting quotes from Holmes' long-winded — but pretty engrossing — denial.

"That I was well trained by loving and religious parents, I know, and any deviations in my after life from the straight and narrow way of rectitude are not attributable to the want of a tender mother's prayers or a father's control, emphasized, when necessary, by the liberal use of the rod wielded by no sparing hand."

Although Holmes doesn't blame his parents for any of his actions, the fact that he claims his father used to beat him with a rod is surely something to note for people interested in psychoanalysis.

His Time Working At An Asylum

"This was my first experience with insane persons, and so terrible was it that for years afterwards, even now sometimes, I see their faces in my sleep."

For someone who murdered so many, it's incredible that Holmes claims to be haunted by the patients of a psychiatric hospital in Norristown, Pennsylvania, that he worked at.

"In the meantime I had carried Nannie to my own room, where she lay, looking more like one asleep than dead."

He writes that his wife Minnie Williams, who he says suffered from mental illness, had killed her own sister Nannie over jealously over Holmes. He details how he disposed of his sister-in-law's body and then ended things with Minnie. Biography notes that both sisters are assumed to have been killed by Holmes.

The Sight Of A Dead Body

"The sight was disgusting, yet when I looked upon it, and realized that at least $20,000 would come to me after a little further trouble, I gazed on it as a very good investment which was about to mature."

In his memoir, Holmes spends a considerable amount of time explaining how he found a dead man who looked like him to fake his own death for insurance money purposes.

"This delay was for the purpose of giving me a chance to freshen my subject up a little. Ice was not procurable, and as there was no drug store in the town, I went down to the grocery store, got the proprietor up and bought several bottles of ammonia, which, when combined with one or two other simple things, made a solution that rendered my quiet friend quite acceptable so far as one's olfactories were concerned."

Holmes had to move the insurance fraud body on a train and this passage highlights how nonchalant he was when it came to transporting a corpse — probably not the greatest passage to include if you're trying to prove your innocence.

"The balance of my short stay in this prison was taken up by reading 'Les Miserables,' a peculiarly interesting volume to me under the circumstances, and I judge it was to all prisoners who cared for reading, as was evidenced by the condition of the book itself, which I obtained from the prison library."

Even serial killers can make time for the works of Victor Hugo.

The Death Of Benjamin Pitezel

"At last I forced myself to burn the clothing upon one side of the body, smothering the flames when they reached the flesh, and in this way produced partially successful results."

Although, as Rolling Stone reported, Holmes was hung to death in 1896 for the murder of Pitezel, Holmes' memoir states that Pitezel killed himself and that his business associate's face was burnt due to the chloroform that he used in his suicide. After Holmes discovered the body, he claims to have only burnt the body to cover the chloroform burns since he didn't want his friend's death to be ruled as a suicide for insurance purposes .... riiiiight.

The Deaths Of Alice & Nellie Pitezel

"Little Nellie followed me to the door, and said, 'Don't forget about baby,' and reaching up kissed me good-bye, and ran back to the seat again. With all truthfulness, I most earnestly state that under the circumstances, and at this time, about 4:30 p.m., Thursday, October 25th, I last saw these children."

Along with Pitezel, Adam Selzer — author of H.H. Holmes: The True History of the White City Devil — notes how it is pretty much accepted as fact that Holmes killed three of Pitezel's children. Two of those children were Pitezel's daughters Alice and Nellie. Holmes claims to have not done this in his memoir with an elaborate story (although it's not quite as elaborate as the story he told about covering up their father's "suicide") by saying he placed the two children on a train and never saw them again.

"I gave up trying to read the article, and saw instead the two little faces as they had looked when I hurriedly left them — felt the innocent child's kiss so timidly given and heard again their earnest words of farewell, and I realized that I had received another burden to carry to my grave with me, equal, if not worse, than the horrors of Nannie Williams' death."

In this passage, Holmes uses some strong (and sickening, considering he most likely killed the two young girls) language to present himself as innocent in the deaths of Alice and Nellie, even going back and referencing the death of his wife Minnie's sister.

"I think she will let me know her location and present name before I am made to suffer for her disappearance."

An employee of Holmes' in Chicago, Biography states that Emeline Cigrand is an assumed victim of his, but he denied this assumption in his memoir. Cigrand was just part of a long list of other potential victims of his that he included in the memoir in which he denied all the claims.

"In conclusion, I wish to say that I am but a very ordinary man, even below the average in physical strength and mental ability, and to have planned and executed the stupendous amount of wrongdoing that has been attributed to me would have been wholly beyond my power."

Along with saying no motive existed for killing all these people, Holmes explains how he is a simple man who would not have been capable of these murders. This is in stark contrast to his later confession, in which some of the people he included in the list of victims weren't even really dead, as Biography notes.

While Holmes is best known for his murders in Chicago, it was the murders he wrote about in his memoir in such (inaccurate) detail that were his undoing. And though the public will never know the full truth of all the horrors that Holmes did, you can watch his great-great-grandson Jeff Mudgett try to pin even more murders on his ancestor in American Ripper.

More like this
These 25 International Horror Movies On Netflix Prove Fear Is A Universal Language
By Bustle Editors
‘Squid Game’ Creator Hwang Dong-Hyuk Just Dropped A Major Season 2 Tease
By Brian Anthony Hernandez and Bustle Editors
Where Is The Bling Ring’s Rachel Lee Now?
By Arya Roshanian
What Is 'Pretty Wild' Star Tess Taylor Up To Now?
By Morgan Leigh Davies
Get Even More From Bustle — Sign Up For The Newsletter