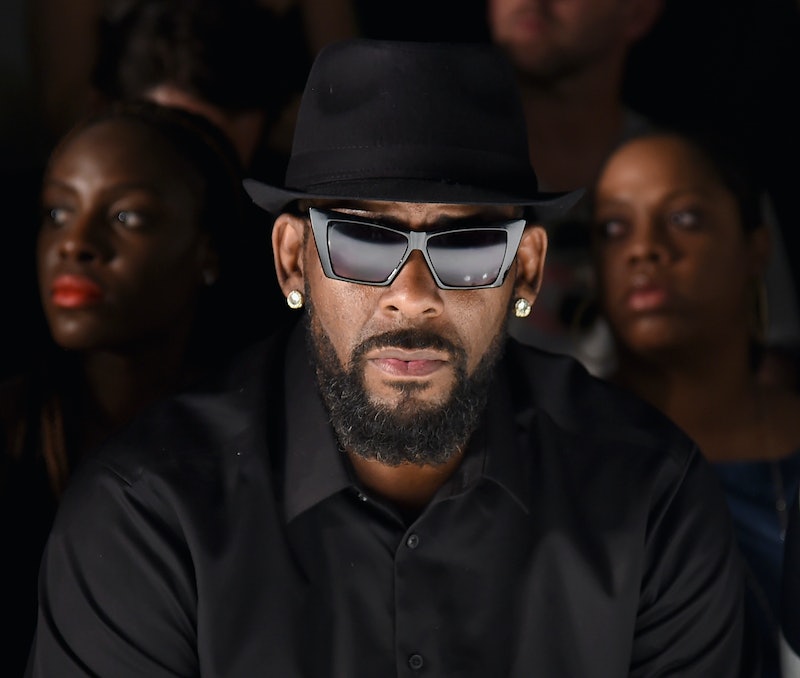 In a Chicago courtroom Monday, a lawyer for R. Kelly entered a plea on his behalf in response to the charges of 10 counts of criminal aggravated sexual abuse. R. Kelly pleaded not guilty, the Associated Press reported.

Kelly showed up to court in an orange jumpsuit after he spent the weekend in Cook County Jail following his arrest and indictment Friday. He's accused of committing illegal sexual acts against four women from 1998 to 2010, three of whom were under age at the time. At least one such encounter was allegedly caught on tape, but Kelly has denied the accusations, and his lawyer said "all the women are lying." Bustle has reached out to Kelly's lawyer for additional comment.

Michael Avenatti, who represents two of the women referenced in the charges and provided prosecutors with the first video, now claims to have more similar tapes. It's unclear if they feature other individuals or are with the same girl Kelly reportedly appeared with in the first tape, which was turned into prosecutors earlier in February.

"I can confirm that we will be providing a second video showing R. Kelly engaged in sexual assault of a minor to prosecutors this morning," Avenatti tweeted early Monday. "This tape was recently uncovered in connection with our ongoing nationwide investigation on behalf of victims. Justice must be done." The AP reported that Avenatti said he turned in the second tape on Monday and referenced a possible third one as well.

Kelly faced another criminal case in 2008 but was acquitted. He was accused at the time of appearing in a sex video with a young girl and was charged with child pornography. Countering witness testimony, Kelly and the identified girl both denied being in the video. However, the girl did not take the stand, andThe New York Times at the time reported that jurors felt they needed to hear from her.

This girl could be one of the women referenced in the newer charges. Kelly's attorney told the court that "one of the charges appears to involve the same alleged victim from the earlier case and double jeopardy should bar that case," CNN reported.

According to the AP, "confidants" of the singer are working to gather the $100,000 needed for bail, which is 10 percent of the $1 million bond the judge set on Saturday. His lawyer told the news service that he expected the singer to be released sometime on Monday or Tuesday. The Guardian reported that part of his terms of release would require no contact with women under 18 years old.

If and when released, Kelly will be expected to stay in the country and has had to turn over his passport. He had two concerts scheduled in Europe this spring, despite the domestic success of the #MuteRKelly campaign.

More like this
Cheryl Remembers “Bright Star” Sarah Harding In Heartfelt Essay
By Sophie McEvoy
Romance Authors Are Mobilizing For Reproductive Rights
By Natalia Perez-Gonzalez
Women Around The World Are Cutting Their Hair In Solidarity With Mahsa Amini
By Darshita Goyal
Everything To Know About Taylor Swift’s 10th Studio Album, 'Midnights'
By Grace Wehniainen and Jake Viswanath
Get Even More From Bustle — Sign Up For The Newsletter