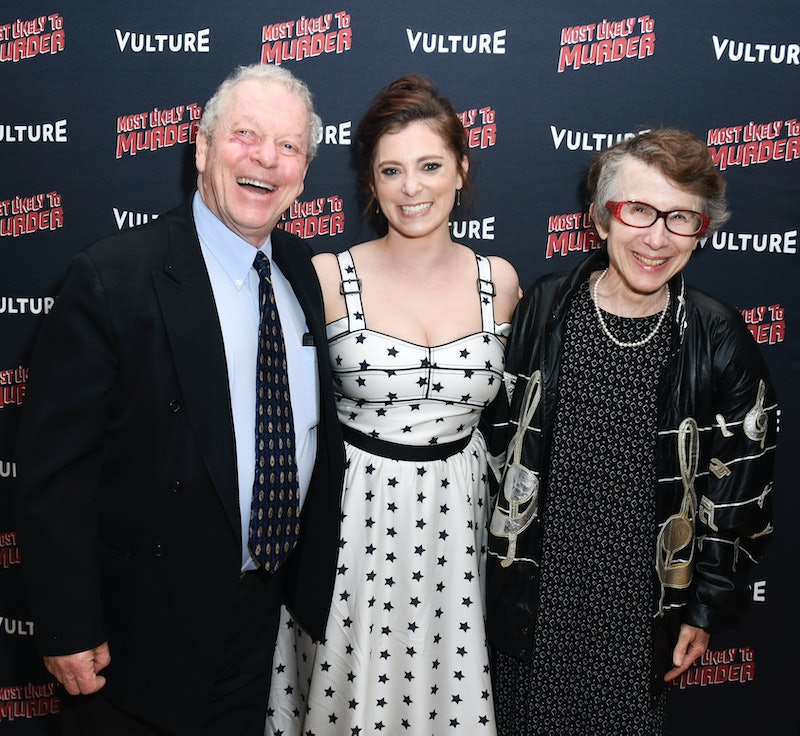 The Crazy Ex-Girlfriend series finale isn't actually the last fans will see of Rebecca Bunch and her wacky West Covina pals. Airing directly afterward is an hour-long concert special that features the cast performing a medley of the show's songs, including the Season 1 ditty "I'm a Good Person." Along with the other audience members at L.A.'s Orpheum Theatre, Rachel Bloom's parents were in the crowd. And when she sang this particular song, she ran into the audience to confirm her "good person" status with Mr. and Mrs. Bloom.

"Mom and dad, say I'm a good person, or I will put you in a terrible nursing home," she fake-threatened them. Her dad, either misunderstanding or performing a bit, said into the mic, "I'm a good person." His daughter responded, "OK, just in case we need it for broadcast, I need you both to say, 'You're a good person,' just in case it's not clear." And while her mom complied, Bloom's dad repeated the same, incorrect sentence. It was an adorable, genuine interaction that may have fans wanting to know more about Bloom's mom and dad. Not only do they seem to be incredibly supportive of their daughter (just check out Mr. Bloom's sweatshirt!), but they have an adorable way of showing it.

In a March 2017 Instagram post, Bloom shared a photo of her parents' bathroom, where an essay she wrote for the New York Times about bowel movements was framed proudly on the wall. "My parents have my NY Times article about pooping in the toilet framed over the toilet where I first pooped and now I'm posting this while sitting on that toilet," Bloom wrote. That's love.

Furthermore, it seems like Mrs. Bloom's fandom expands beyond The CW. According to Entertainment Tonight, Bloom and her mom got to talk to Lady Gaga while they were at the 2019 Critics Choice Awards, and Mrs. Bloom was thrilled. "I love Lady Gaga," she told ET. "I love her singing. She is great." Fortunately, she got to meet the singer when she walked by — an interaction which Bloom posted to Twitter. "My mom loves you," the Crazy Ex-Girlfriend co-creator told Gaga, which prompted the pop singer to say, "Hi, Mom," and hug her.

According to a 2017 profile in LA Weekly, Bloom grew up in Manhattan Beach, California, where her father was a health care lawyer and her mother was a stay-at-home mom. In an interview with the Jewish Telegraphic Agency, Bloom explained that while both of her parents are Jewish, she never had a bat mitzvah. Instead, her parents let her quit Hebrew school when she was about nine to pursue theater. "I was raised pretty secular, but I always say, 'We didn't have Passover seders, but I know every single celebrity who's ever said anything anti-Semitic," she recalled.

And since Bloom was an only child, she told the New York Times that her childhood was eccentric. "Only children are weird," she said. "The only children I know, including myself, are either super weird or very talented and special or a mix of the two." And her parents were fairly quirky, too. The actor explained that her parents walked everywhere and that their house was mostly decorated with Disney-themed artwork and pictures of her.

And it seems like she had a good relationship with her parents. In fact, her mom even dunked on her daughter when Bloom shared a provocative tweet about orgasms. Mrs. Bloom, who has a private Twitter account, replied, "Is this the little girl I carried?" which is a line from Fiddler on the Roof. Bloom screenshotted their interaction and posted it to Instagram with the caption, "I think my mom just...won Twitter?"

And it seemed like the Blooms won Crazy Ex-Girlfriend's musical concert, too.