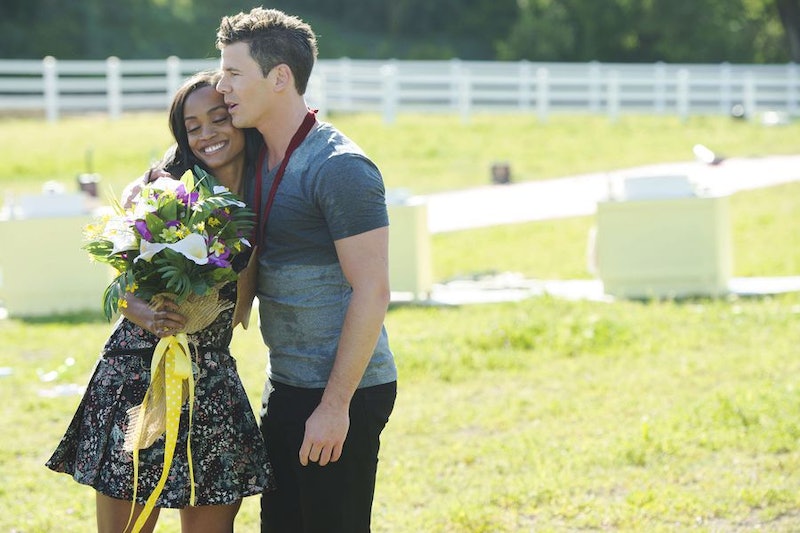 It had to happen eventually, and as it turns out, "eventually" was sooner rather than later. On Monday night's episode, Rachel sent Whaboom home on The Bachelorette after a really weird cocktail party evening of listening to him and Blake going back and forth over an event involving a banana. Instead of keeping either of those dudes, the rose went to Diggy, and predictably, fans were thrilled. In fact, the Twitter reaction to Whaboom's departure was basically a giant GIF party.

I'm a little surprised that Rachel (read: the producers) let him go so early on in the season, but our girl is taking things very seriously. Don't believe me? Just ask DeMario. If she isn't impressed, she cuts things off — an admirable trait, since it's better than the alternative of leading someone on. It was pretty obvious from their first meeting that Whaboom was not the guy of Rachel's dreams, even though I truly believe that at heart, he's a nice person... even if he's obnoxious enough to wear his own face and catchphrase on a shirt.

And if you're missing Whaboom's quirky personality already, never fear — he's gotta appear on one of the Bach spinoffs eventually, right?

This Representation Of Rachel

Don't worry, everyone — this is real life.

The Sheer Celebrating That Happened

This GIF is very appropriate, because I feel as though Beyoncé would approve of Rachel's decision.

The Reality Of What Comes Next

I will not be surprised at all if he shows up on the beach this summer.

How Rachel Must Have Felt

I mean, we'll never really know how she feels about it unless she decides to dish out some honesty, but I have a feeling this is accurate.

The Sheer Excitement Of The Moment