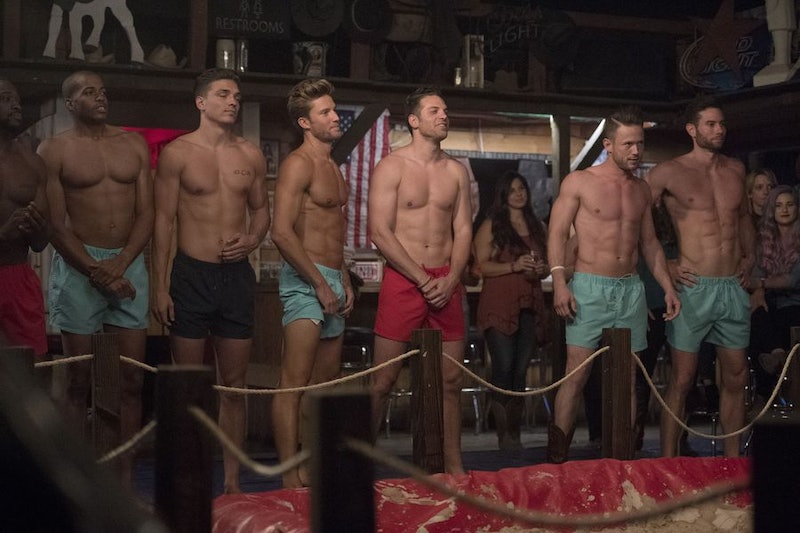 Even if you're a Bachelorette skeptic, there's a lot to love so far about Rachel Lindsay's season, and they all stem from the woman at its center. And one thing I'm enjoying is that Rachel is openly talking about her desire for The Bachelorette men — and I'm loving it. During both of the third episode group dates, she delighted in getting to see them with their shirts off, cackling as they were encouraged to strip for singles and pole dance. While on Ellen, a few of the men were asked if they've ever thought about having sex with Rachel, and while the answers varied between the group, instead of getting embarrassed or demurring, she responded with a wry look, as if to suggest "Really? You've never thought about it?"

She has such incredible confidence at every turn, and I almost wonder if this highly orchestrated reality show is more freeing than actual dating in the real world as a black woman. I am not a highly successful and incredibly beautiful lawyer, so I have no personal anecdotes to share — but I do know that reportedly Black woman receive less responses in online dating apps on average, according to OKCupid. I'm sure that Rachel has always had plenty of men to date, but she is delighting in the chance to take an extended vacation and get to know 31 different men who all want to win her heart, and occasionally see them disrobe. Same, girl.

Actually, I love all the ways this season is approaching desire and desirability. Rachel is always outfitted in a warm coat when everyone is outside together, so she's not forced to be uncomfortable, and she designed a whole group date around mud wrestling. She even invited her female friends along, so she'd have people to talk to and ask for advice, practically reducing the men to very entertaining window dressing. I don't think it's crossed the line into openly leering at the guys, but there's definitely a sense that Rachel is not going to pretend for a moment that chemistry in a kiss is any less important than chemistry during a conversation (just look at what happened to poor Fred). This is something not often broadcast on network TV from the perspective of a black woman.

And while it was cathartic during the first two episodes to see the men lavish praise on Rachel for being incredibly beautiful, quick-witted, smart, and remarkably normal given the circumstances, the season's charms haven't stopped there. To see a circumstance where this black woman is not just rightfully adored by 31 men, but given the freedom to confidently and assertively want them back, unafraid to talk about sex or sense of humor? That's just one way Rachel's Bachelorette season is special, and I can't wait to see more.