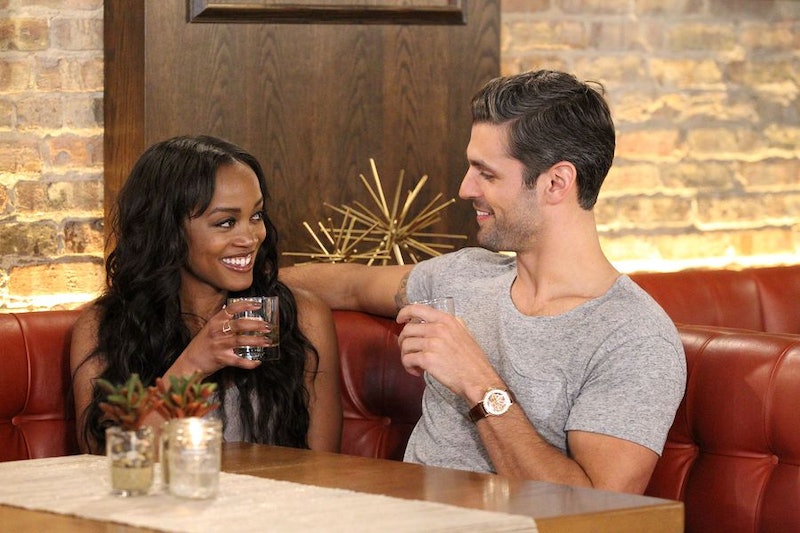 Every year, The Bachelorette's season finale is pretty brutal, but this time around, it was even worse. Not only did we have to witness Rachel Lindsay's emotional breakup with Peter Kraus, but we also had to see them come face to face for the first time on Monday night, and both segments were really hard to watch. And although it's easy to see where he was coming from, Rachel told Peter he was the wrong fit for The Bachelorette — a harsh statement, but it might actually be true.

The main issue in Rachel and Peter's relationship (among other things) was that although they both had feelings for each other, Peter didn't feel ready to propose to someone after only knowing them for a matter of weeks. Rachel wanted to leave The Bachelorette as an engaged woman, and if Peter wasn't willing to commit to that, it was a deal breaker for her. The tearful conversation where they came to this conclusion was so raw and difficult, but it had to take place, and when they reunited on the live after show, it seemed like neither of them were 100 percent over the sting of those final moments.

And during that chat, Rachel laid it on him: "I just don't think this world, this show, is for you."

Peter wasn't right for Rachel, but that doesn't mean he didn't have a point himself. It's ridiculous to expect anyone to know, beyond a shadow of a doubt, that they want to marry someone after only knowing them for a few weeks and spending very limited time with them... on camera. Some people know and are ready to make that commitment that quickly, while others need more time, and that's totally OK. In fact, it's probably the norm, because unfortunately, life isn't The Bachelorette.

But Rachel's statement couldn't be more on the money. The Bachelorette and The Bachelor are shows about finding a husband; the stakes here are really high and that's part of the reason why so many people watch. Besides, this franchise has been on forever (or, you know, since 2002). Peter had plenty of material to research, and it's no secret how the show works. He knew exactly what he was getting into, and how this thing was supposed to end.

And it's not just that Rachel's saying Peter is wrong for The Bachelorette, she also could be saying that he would be the wrong choice for the next Bachelor, as this fan pointed out:

And even though Peter seems to be the fan favorite for the gig so far, this is such a good point. If he doesn't like the format of The Bachelorette and having to make his mind up about such a big, life changing decision so quickly, he wouldn't be right for The Bachelor at all.

Of course, the producers could spin things a little differently if they really want Peter to have the job, making the season more about finding someone he wants to settle down with rather than making the end goal an engagement. What happens next probably won't be revealed until Bachelor in Paradise ends later this summer, but it'll be interesting to see if Peter's behavior really does end up disqualifying him for the role.

It's totally Rachel's prerogative not to settle for anything less than the proposal she expected and wanted at the end of the season — just like it's Peter's not to be pushed into an engagement he's not ready for. Neither of them are wrong, but it doesn't make their breakup any less upsetting, for them or for the fans who have been rooting for them all along.

Rachel seems happy with the choice she made, and Peter isn't stuck in an engagement he may not have wanted. It might not be the happiest of endings, but it's real. It will be interesting to see if he changes his tune if he does end up becoming the next Bachelor... or if the producers decide to go another way because of it entirely.