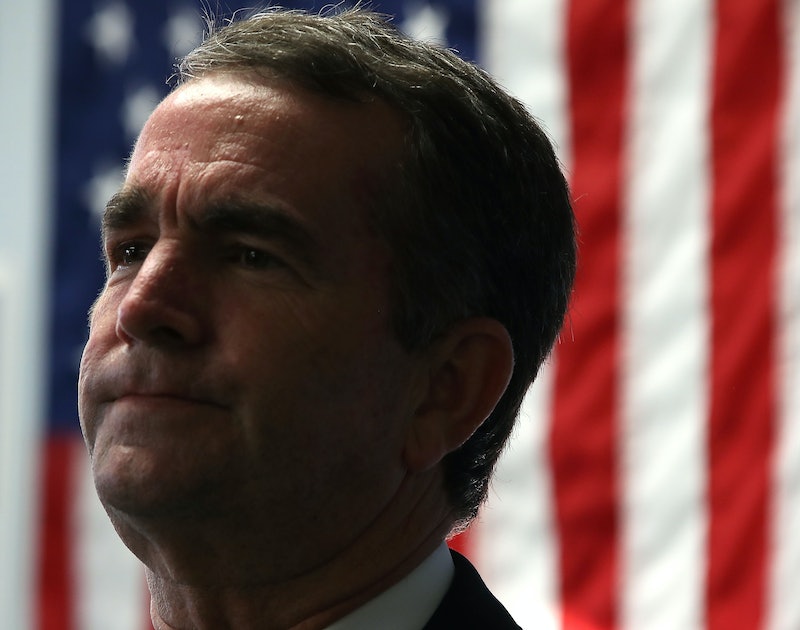 Less than 24 hours after apologizing for having allegedly appeared in a racist yearbook photo, Virginia Gov. Ralph Northam denied that he was actually in the photo, though he told reporters that he had "darkened" his face on a separate occasion. During a press conference on Saturday, Northam said he had never been photographed in racist attire, but did admit that he once "darkened" his face with shoe polish during a 1984 dance competition. Bustle has reached out to Northam's office for comment.

At the press conference, Northam alleged that a photo of two people wearing blackface and a Ku Klux Klan robe had mistakenly appeared on his medical school yearbook page, and that neither of the people was him. However, Northam then told reporters that he once wore blackface to dress up as Michael Jackson for a dance competition in San Antonio. While the Virginia governor acknowledged that both the photo and his decision to wear blackface were "hurtful," he suggested that there is "a difference between me dressing up as Michael Jackson in a dance contest" and posing next to someone in a KKK robe.

Northam's comments on Saturday prompted further backlash, as well as additional calls for him to resign. Many social media users pointed out that it was Northam's alleged decision to wear a racist costume that sparked widespread outrage — not just the fact that a racist photograph had surfaced in connection with his name.

Following Northam's Saturday remarks, many of his fellow Democrats doubled down on their calls for him to resign. Former U.S. Attorney General Eric Holder, for example, argued that Northam's resignation is the first step in discussing the pervasiveness of racism across the country.

Some social media users called on Northam to resign so that Lieutenant Gov. Justin Fairfax could take his place and become Virginia's second black governor in history.

Others reminded their followers, however, that the burden of getting Northam to resign should not fall on Fairfax:

And still others criticized Northam for being a physician who may have made patients feel unsafe through his actions. Activist DeRay Mckesson, for example, pointed out that Northam may have had black patients who cannot trust him.

Mckesson also pointed out that many of Northam's peers may also have worn blackface or other racist costumes but were never photographed doing so. In fact, during his Saturday press conference, Northam said that a racist photo may have been placed on his page by mistake because there were other photos of people in blackface in other parts of the yearbook. Journalist Yamiche Alcindor criticized Northam, noting that he should have realized much sooner that wearing blackface is wrong.

California Rep. Ted Lieu, meanwhile, alleged that Northam was lying about not being in the photo. Lieu cited a tweet from The Washington Post's Mike Semel, in which Semel noted that Northam and his fellow students were responsible for submitting their own yearbook photos.

The president of the NAACP, Derrick Johnson also denounced Northam's admission that he had once donned blackface, arguing that the Virginia governor had failed to be accountable in his Saturday remarks.

Since the racist yearbook photo first surfaced on Friday, numerous prominent lawmakers — from House Speaker Nancy Pelosi to Vermont Sen. Bernie Sanders — have called on Northam to resign, but the governor said on Saturday that he does not want to follow the "easier" path of stepping down.