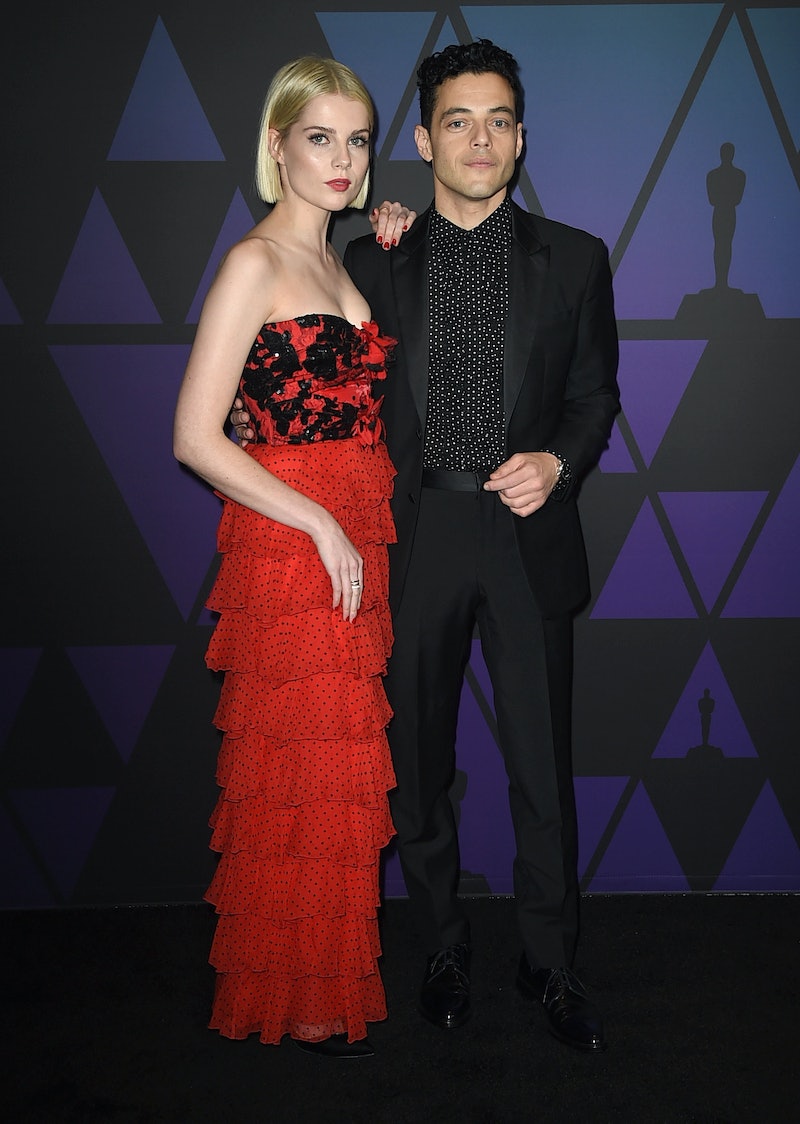 Freddie Mercury and Mary Austin's relationship may have had its ups and downs, but the Bohemian Rhapsody actors who played them on-screen seem to be on very stable ground. According to Us Weekly, Rami Malek and Lucy Boynton are dating in real life, and Malek called her "my love" while accepting an award on Thursday.

"I'm just really honored to be here," Malek said at the 30th Annual Palm Springs International Film Festival's Film Awards Gala on Thursday, Us Weekly reported. "Thank you, Lucy Boynton. You have been my ally, my confidant, my love. Thank you so much."

The actor was receiving the Breakthrough Performance Award for his role as Mercury in Bohemian Rhapsody when he gave the touching speech. Malek is also nominated for Best Actor in a Drama at the Golden Globes this Sunday. Bohemian Rhapsody is nominated for Best Motion Picture — Drama, too, so it's pretty likely that fans will see Boynton alongside him at the awards show.

Malek is no stranger to awards shows, having won an Emmy in 2016 for his role as Elliot in the USA series Mr. Robot. But it's nice to see him thanking his girlfriend and costar in his acceptance speech.

Before this week's awards shows, the two of them have been seen together in London, as well as in Los Angeles. And according to People, they went to a U2 concert together last May. They were also seen walking around Los Angeles and even sharing a kiss in August, the magazine noted. Plus, they were seen out and about in L.A. again in November, according to The Daily Mail. So even though they haven't been super public about their relationship on social media, they haven't exactly been hiding anything from fans, either.

And as Bustle previously reported, Boynton did seem to make one sly reference to Malek last year. In April, she wrote in an Instagram post, "Lost some wisdom today but the upside is ma boyfriend’s gonna be gettin a jazzy homemade necklace for his bday." The Sing Street star didn't name Malek as her boyfriend in the post, but the timeline adds up.

As The Daily Mail pointed out, Malek was linked to a different costar before he and Boynton dated. The actor reportedly dated Portia Doubleday, who starred alongside him on Mr. Robot, until breaking up sometime in 2017.

If Malek wins the Best Actor in a Drama award at the Golden Globes this weekend, there's a good chance he'll echo Thursday's speech and give Boynton a shoutout at the event. It sounds like he's ready to take their relationship into the public eye officially, and that seems to include sharing some touching words about her during awards show speeches.