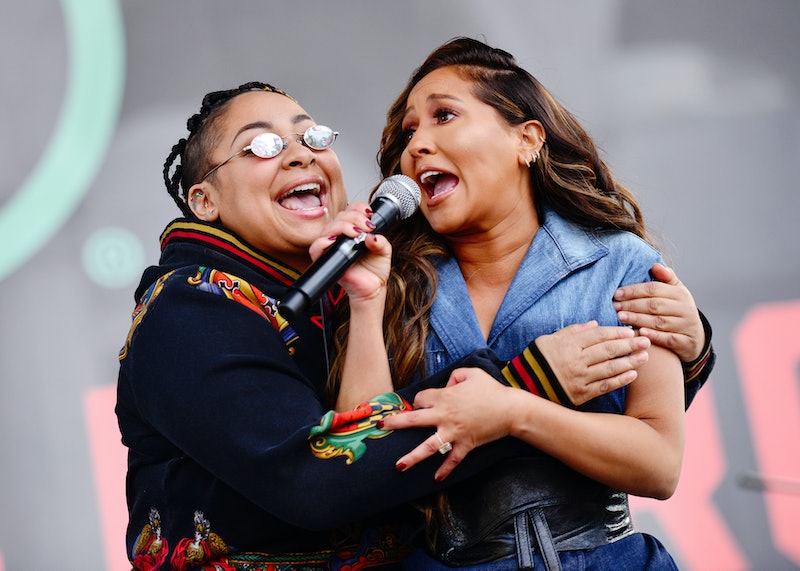 The Cheetah Girls may be "amigas cheetahs, friends for life," but even the closest of gal pals get in petty arguments. In a new interview on Thursday, April 2, Raven-Symoné said a Cheetah Girls reunion is possible, after the coronavirus pandemic is done for good. But first, the girls have to work out some issues among themselves which have played out in the public eye recently.

The Raven's Home star told Entertainment Tonight that she would be open to reviving the Cheetah Girls somehow if all of them were on board. "I need to talk to the girls first because we need to curate an answer," she explained. "This can go so sideways on so many levels. It's just, real girl groups have their moments. Imagine a fake one."

Raven seems to be referring to the recent Internet drama between bandmates Kiely Williams and Adrienne Bailon Houghton. Last week, Williams made headlines when she took to Instagram Live to air out her drama with Houghton. She accused her of "pretending" to be a friend and declared that she wouldn't appear on her former 3LW bandmate's talk show The Real, though she did not reveal what caused their apparent fallout.

"I don't think Adrienne wants to have live TV with me," Williams said, as per Vibe. "'Cause she's gon' have to say, 'Yes Kiely, I did pretend to be your best friend. Now, I am not.' You were either lying then or you're lying now. You either were my best friend and now you're just not claiming me or you were pretending."

She went on to say that she has nothing to apologize for when it comes to Houghton, so who knows how or when this will get fixed. Houghton has yet to publicly respond to Williams' comments. But Raven said she is always down to work with The Real host as they remain on good terms today. "I will work with Adrienne for the rest of my life. She's awesome sauce," she told ET, before saying that she loves "everybody in their own ways."

That spirit and individuality is why she still believes in the Cheetah Girls' mission today, and why she'd be down for an eventual reunion. "The message of the Cheetah Girl movement is the most beautiful thing I think I've ever been a part of and the stories that have come out have shaped and molded many generations," she said. "I would love to be a part of that brand again. But it needs to be genuine. We all have to be there."

She also may be inclined to get back with the band after failing to appear in the third and final Cheetah Girls movie One World. "It was my bad for not being in the [third] one, that was my bad, but you know, who knows," she said. "After corona, anything is possible!" If there's one silver lining to be taken from this pandemic, it's the renewed potential for the Cheetah Girls to bring back Girl Power again full force.

More like this
The Spice Girls Just Dropped A Brand New Music Video
By Sam Ramsden
Lindsay Lohan & Jonathan Bennett Celebrated Mean Girls Day Very Differently
By Jake Viswanath
Netflix Reveals First Look At Wednesday In The 'Addams Family' Spinoff Series
By Bustle Editors
Everything You Need To Know About ‘Black Panther: Wakanda Forever’
By Bustle Editors
Get Even More From Bustle — Sign Up For The Newsletter