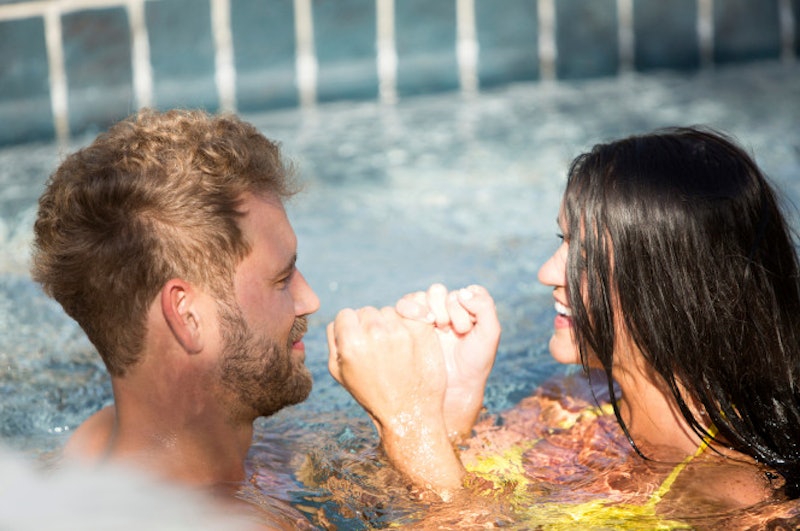 Something monumental happened on this week's episode of The Bachelor. No, it wasn’t polarizing villain Corinne getting sent packing (and subsequently falling asleep in the limo). It wasn’t Andi’s awkwardly-hyped return. It wasn’t Nick’s Twitter-lambasted turtleneck. It was Raven’s confession that she’s never had an orgasm.

We first hear Raven saying she’s never had an orgasm during a solo interview in Finland. She’s talking about the prospect of spending a night in the Fantasy Suite with Nick. She discusses the possibility of the two of them having sex, and almost offhandedly mentions that she’s never had an orgasm. Later, at dinner with Nick, she opens Chris Harrison’s invitation to the Fantasy Suite (I love picturing Chris Harrison personally penning these awkward letters). Nick asks her if she wants to spend the night together, and she says yes, but that she wants him to know two things — that she has only ever been with one partner before, and that her ex never made her orgasm.

When I heard Raven utter the words, “I’ve never had an orgasm” on a show watched by millions of viewers, I actually gasped out loud. Then I immediately rewound it and watched it again. To the best of my memory, I can’t recall anyone discussing female orgasm so openly and honestly on reality TV. As someone who has spent the majority of my career working with female orgasm, this was a major milestone.

There was so much crammed into those two little moments.

The way she said it was what struck me first. Raven talked about her orgasm plainly and calmly. She said she wanted to be able to experience a spark with Nick, but she didn’t seem concerned about what Nick would think. She sounded like she was telling you that she has never owned a dog, or has never been to Alaska before.

This brave woman isn’t even embarrassed to say she’s never had an orgasm. She’s not acting like she’s confessing to shoplifting. She’s telling her truth plainly and unabashedly.

But her composure was what caught my attention on my repeat viewing. Her tone was even. Her cheeks didn’t flush, she didn’t cry, she didn’t talk about feeling broken. She didn’t seem to be experiencing embarrassment, sadness, frustration, or any strong emotion, really. It was even more striking when she talked about her orgasm with Nick. She had just finished a long, emotional speech confessing to being in love with him. She had to stop several times, even taking a swill of wine at one point to get some liquid courage. But when it came to telling Nick she has never had an orgasm, Raven was cool as a cucumber. She even laughed and made a little joke in response to his surprised face.

Surprisingly, the producers didn’t make too big of a deal out of the whole thing, either. I don’t think it was ever in any of the teaser footage for the season. They previewed a clip before the segment itself, but that was it. The moments themselves weren't dramatized. There were no over-the-top montages of Raven staring off into the distance. No voiceovers telling her long, sad story of an orgasm-less existence. The presentation was almost as laid-back as her admission. It just wasn’t that big of a deal.

To the women who seek out my orgasm courses, Raven’s confession is huge. One of the most frequent things I hear about from my clients is, “I feel like I’m the only woman in the world who has never had an orgasm.” Well, here’s nationally-televised proof that you’re not! Not only that, but this brave woman isn’t even embarrassed to say she’s never had an orgasm. She’s not acting like she’s confessing to shoplifting. She’s telling her truth plainly and unabashedly.

If you’ve yet to have your first orgasm, Raven should be your orgasm heroine. Don’t be embarrassed about your orgasmic status, because you have nothing to be embarrassed of. Talk about your orgasms openly and honestly. There’s so much BS out there about female orgasms, and the only antidote is for more women to come forward and speak candidly about their experiences.

I only have one small quibble with what Raven said.

When you’re about to be intimate with a partner, follow Raven’s lead and let your partner know what’s up. Tell them plainly and confidently, because, again, you have nothing to be embarrassed of. I know it takes a bit of courage to come out and talk about orgasm so directly, but consider the alternative — you’re in the middle of having sex, and your partner asks, “Are you there yet?” or “Are you close?” It’s much harder to figure out what to say right there in the moment. Plus, you’ll feel more tempted to fake an orgasm, which we all know won’t help you learn how to have real orgasms.

I only have one small quibble with what Raven said. She told Nick that her partner never “made her” orgasm, rather than saying she’d never had one. Raven’s ex (and anyone she sleeps with in the future) should have made an active effort to bring her pleasure, but at the end of the day, we’re all responsible for our own orgasms.

Orgasm is a skill that can be learned with some time, practice, and patience, and it’s important for each and every one of us to get that process started on our own. Learning how to get yourself off is one of the most empowering experiences you can have. Might I point you in this direction, Raven?