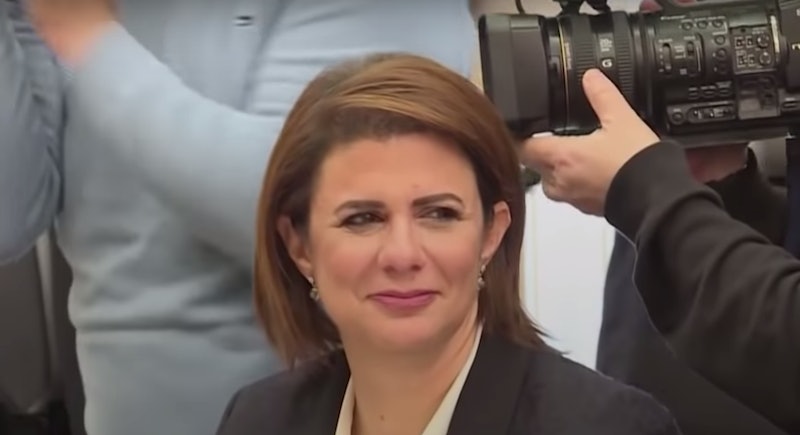 Lebanon's new government has four times the number of women ministers than the last government — and one of these ministers is making history. Raya al-Hassan was named Lebanon's interior minister — a first for a woman in Lebanon, The Guardian reports.

The interior minister oversees security inside the country, something that Hassan herself acknowledged as a big step. "This is a point of pride for all women and all the people who believe in women's capabilities," she told Reuters.

"There are a lot of female interior and defense ministers in the world and they have proved their efficiency," Hassan told the news service. "It might be a new phenomenon for Lebanon and Arab countries, but hopefully it will be repeated and not be unique."

In an interview with Euronews, Hassan called her appointment to the role a "unique experience that needs to be mainstreamed and generalized in other countries in the region."

There's a fair amount of pressure in the new job, though, she told The National — in no small part because she's a woman. "Because I’m the first woman, I need to act as a role model and prove that women in positions that are usually held by men can do the job as well, if not better, than men," Hassan told The National.

That can be a tad difficult when working with men who aren't used to women in positions of power. She told The National how she has coped in her near 25 years in politics:

You learn to deal with being talked over by men. Sometimes you have to be forceful and speak your mind, and sometimes you have to be diplomatic and non-confrontational, maybe smile here and there and let them say what they want to say. But at the end of the day, you try to discreetly pass your message or implement your action.

Hassan will easily equal any predecessors; she previously served as the country's finance minister and in other capacities, according to Bloomberg.

In several interviews, Hassan has also stressed that one of her focuses will be helping victims of domestic violence. That's in addition to other areas that she will oversee, like how to help with the economic impact of having 1.5 million Syrian refugees living in the country.

"Police posts in every village or city of Lebanon have to listen to abused women and take in consideration women's complaints... I will be strict about this issue," she told Euronews.

Hassan's appointment — along with the three other women ministers — marks a big shift in Lebanon. Under the prior government, not even the minister of women's affairs was a woman. Also, the number of women who ran for parliament in 2018 was record-setting: 113 versus 12 in 2009. Just six were elected, though, underlining why Hassan's appointment is key for Lebanese society.

The new women and youth minister, Violette Safadi, told The Guardian that the country is at a turning point. "Lebanon is a male-dominated society and though women reached very important positions, when we talk about politics, especially parliament and government, their presence was modest," Safadi told the paper. "I think we broke this barrier."

Hassan's appointment has made waves across Lebanon and the region.