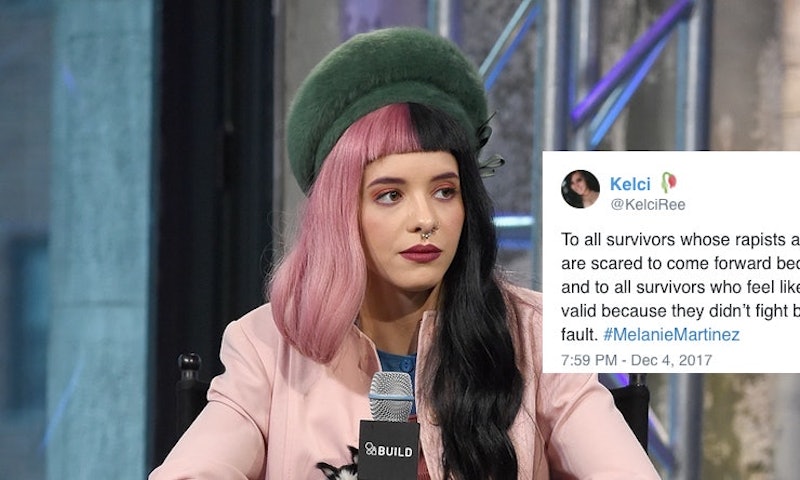 In the recent swell of assault and harassment allegations leveled against people in the entertainment industry, we've been repeatedly reminded of one detail: There is no singular type of survivor, just as there is no singular type of accused assailant. In the wake of sexual assault allegations against Melanie Martinez raised by her former best friend, musician Timothy Heller, this idea pops up once again. And there's one specific tweet regarding the allegations against Martinez that highlights exactly why we can't reduce accusations, or the people involved in them, to careless, singular stereotypes.

UPDATE: Martinez released an additional statement on Twitter on Saturday, Dec. 9. It reads:

I understand how hard it could be to see my side of the story, considering no one with a heart would want to invalidate anyone speaking up about this topic. I want to thank my fans who took the time to research the timeline, analyze past Instagram photos, and question the story being told, which reveal her false statements. I trusted so many people in my life who took advantage of that trust for their own personal gain. Please know that my intentions with everything that I do in my life are always pure and I would never be intimate with someone without their absolute consent.

It's worth noting that Martinez has denied the allegations against her, claiming that the encounter Heller described in a series of four tweets published on Monday, was consensual. The two artists appear to have met at a 2014 show in Nashville, where The Voice alum and Heller's band, Dresses, both performed. A close friendship between the two followed. However, without detailing specifics regarding the date of the alleged incident, Heller also alleges that Martinez exhibited predatory behavior towards her soon afterward.

According to Heller's published notes of the alleged incident, Martinez escalated questions regarding her friend's sexual preferences to allegedly pressuring her to have sex. Heller claimed that she "repeatedly said no," on the first night of a two-day sleepover the alleged incident took place, but claimed that it led to nonconsensual touching, regardless. On the second night, Heller alleged that Martinez forced oral sex and penetration upon her, and that despite not saying "yes" to the acts, Heller felt pressured to comply. Heller claimed, "I was so exhausted and confused and high and belittled I just allowed it to happen." Hours after Heller published her allegations, Martinez responded on Twitter and wrote, "I am horrified and saddened by the statements and story told tonight by Timothy Heller," and added, "She never said no to what we chose to do together."

Judging from a few responses to the allegations on Twitter, the continued friendship between Heller and Martinez is something that to some apparently complicate the accusations — but it absolutely shouldn't. A survivor's behavior following an assault, or how they acted toward their assailant afterward, shouldn't be used as a barometer for the truth.

This is a vital point to be reminded of at a time when there are multiple sexual assault allegations being brought forward publicly on an almost daily basis, many of which can concern alleged assaults and harassment that took place years ago, and against individuals who may have complicated relationships to their assailant. Who these people may be, how they knew their alleged abusers, or how they may have acted towards them following the alleged incident may be shouldn't a means of determining the veracity of an accusation.

Rapists don't come in one easy to spot form. They can be committed by men or women, to men or women. They can also be popular, friendly, and kind. Similarly, survivors can remain friendly with their rapist for a long time afterwards and they can also feel powerless in stopping an assault that other people may assume they could have prevented. The more that stereotypes and myths get perpetuated regarding sexual assault, the more that people feel scared to come forward with their own stories out of fear of being silenced, blamed for their assault, or called liars.

If we're going to do better as a society in preventing sexual assault, taking allegations seriously, and respecting individuals when they're brave enough to finally speak up, then we have to be frank and realistic about what sexual assault actually looks like. It can be confusing to experience and it can be devastating to stay quiet about. But what it certainly can never be is so simple that we can dismiss an allegation based on our preconceptions of what sexual assault should look like. There is no single story. There is only our experience. And we all deserve the right for that to be heard.