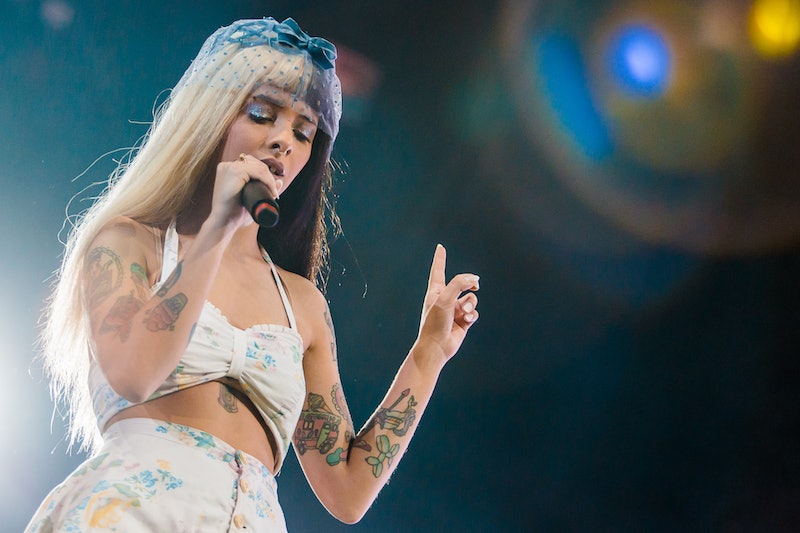 High-profile men in the entertainment industry are being accused of assault and harassment on a daily basis, but the most recent celebrity to come under fire is a woman. The Voice's Melanie Martinez stands accused of sexual assault by her former best friend, fellow musician Timothy Heller. (Martinez has denied the allegations, claiming that the encounter was consensual.) Heller went public with her allegations on Monday in a tweet that included four screenshots from Notes spelling out her accusations and naming the Voice alum as their alleged perpetrator.

UPDATE: Martinez released an additional statement on Twitter on Saturday, Dec. 9. It reads:

I understand how hard it could be to see my side of the story, considering no one with a heart would want to invalidate anyone speaking up about this topic. I want to thank my fans who took the time to research the timeline, analyze past Instagram photos, and question the story being told, which reveal her false statements. I trusted so many people in my life who took advantage of that trust for their own personal gain. Please know that my intentions with everything that I do in my life are always pure and I would never be intimate with someone without their absolute consent.

EARLIER: The two artists seem to have met at a 2014 show in Nashville, where Martinez and Heller's former band Dresses both performed. Afterward, they had a close friendship, details that neither dispute, but Heller claims that their relationship turned predatory soon afterward. (In her post, the 25-year-old says that she has "kept this secret for years," but offers no more specifics about the date of the alleged incident.)

Heller alleges that during a two-day sleepover, Martinez began questioning her about her sexual preferences, and escalated to pressuring her friend to have sex with her. Heller claims that she "repeatedly said no" that first night, but that it still allegedly resulted in nonconsensual touching. She also alleges that the behavior extended into the second night of the sleepover, when Heller alleges that Martinez escalated to forced oral sex and penetration. Or, by her own allegations: rape. "I was so exhausted and confused and high and belittled I just allowed it to happen," she alleges, emphasizing again her claims that she never said yes, and that she felt pressured to comply.

The Cry Baby singer responded to the accusations hours later, via a screenshotted Notes post of her own published in the early morning hours of Dec. 5. "I am horrified and saddened by the statements and story told tonight by Timothy Heller," she shared on Twitter. She doesn't deny Heller's claim of a sexual incident between the two artists, but alleges that their encounter was consensual, writing, "She never said no to what we chose to do together."

(No matter where you stand on these accusations, it's important to note that Martinez seems to be citing the "no means no" philosophy for defining sexual assault. In recent years, this idea has been largely replaced with the concept of the enthusiastic yes.)

But the changing dynamics in our conversations about consent aren't the only necessary things to come out of these accusations. It's also important that we give these accusations the same weight we would if they were leveled against a man. In her claim, Heller urges the reader to think twice before dismissing her, writing, "Girls can rape girls. Best friends can rape best friends. Friendship does not equal consent. Silence doesn't equal consent."

In this case, it's possible to take Heller's point no matter how her allegations strike you. Whether or not you believe that this did happen to her, it's undeniably possible that it could happen. Harassment and victimization know no age, no gender, no race, no language, no religion, and no orientation. They have the potential to spring up anywhere that there's an imbalanced power dynamic, which — tragically — makes these abusive relationships nearly universal.

They can emerge in a workplace, in a classroom, at a party, in a mentorship, in a casting session, between two women, between two men, in a marriage, and yes, even in a friendship. And if this is really going to be a watershed moment for our society, then we need to reject all of our preconceived notions about who can be a victim and who can be a perpetrator, and treat all accusations equally.