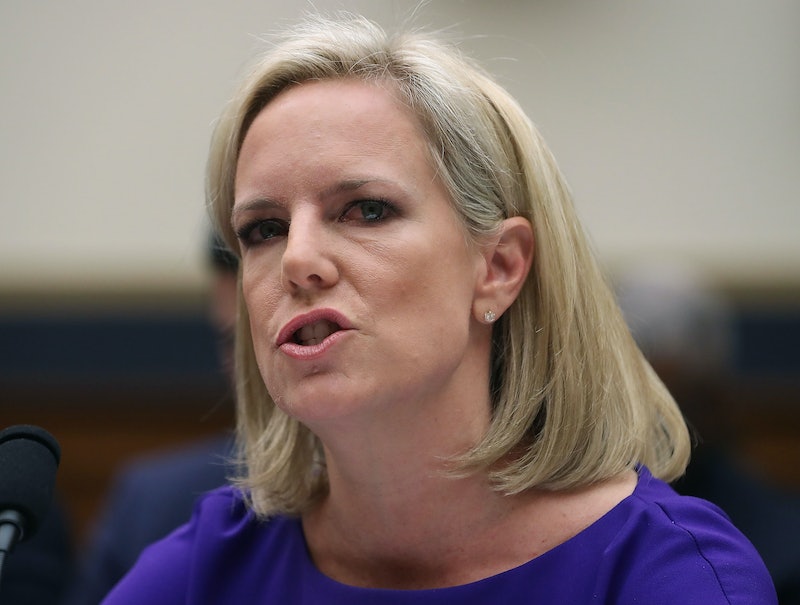 On Wednesday, Homeland Security Secretary Kirstjen Nielsen released a statement regarding the 8-year-old Guatemalan boy who died in U.S. custody on Christmas Eve after being apprehended by immigration officials. Nielsen blamed the child's death on "smugglers, traffickers," "activist judges" and "those who seek open borders," but nevertheless announced that DHS will take several steps to try and prevent migrant children from dying in its custody in the future.

"Our system has been pushed to a breaking point by those who seek open borders," Nielsen said a roughly 1,000-word statement. "Smugglers, traffickers, and their own parents put these minors at risk by embarking on the dangerous and arduous journey north. This crisis is exacerbated by the increase in persons who are entering our custody suffering from severe respiratory illnesses or exhibit some other illness upon apprehension. Given the remote locations of their illegal crossing and the lack of resources, it is even more difficult for our personnel to be first responders."

In her statement, Nielsen claimed that "it has been more than a decade since [Customs and Border Patrol] has had a child pass away in their custody." (A 7-year-old died in CBP custody less than two weeks before the Guatemalan boy's death, which Nielsen acknowledged at the time.) In response to Bustle's inquiry, a DHS official clarified that "no minor [had] died in CBP’s custody before this month since 2009."

Felipe Alonzo-Gomez was taken into custody on Dec. 18, DHS said. He quickly became "feverish and nauseated," according to the Cut, prompting officials to take him to a hospital. He was diagnosed with a cold and released back to CBP, then died several hours later after his conditions worsened.

Nielsen said that, in response to Alonzo-Gomez's death, the agency will give "more thorough" medical screenings to the immigrant children it apprehends than the screenings it already gives. She has also asked Mexican officials to investigate the "the causes of these illnesses on their side of the border" — though it's worth noting that Alonzo-Gomez isn't confirmed to have contracted his illness in Mexico — and plans to visit the border later in the week to "see first-hand" what kind of medical screenings immigrant children are given.

Nielsen said she's "proud of the lifesaving work the men and women of the Border Patrol do every day," but that she and the rest of DHS "do not currently have the resources we need to execute the mission as directed by Congress." After blaming the influx of family migration to the United States on "bad judicial rulings from activist judges," Nielsen told lawmakers to "put politics aside" and give DHS more "authorities and resources."

"The unprecedented number of families and unaccompanied children at the border must not be ignored," Nielsen said. "I once again ask – beg – parents to not place their children at risk by taking a dangerous journey north. Vulnerable populations – including family units and unaccompanied alien children should seek asylum at the first possible opportunity, including Mexico."