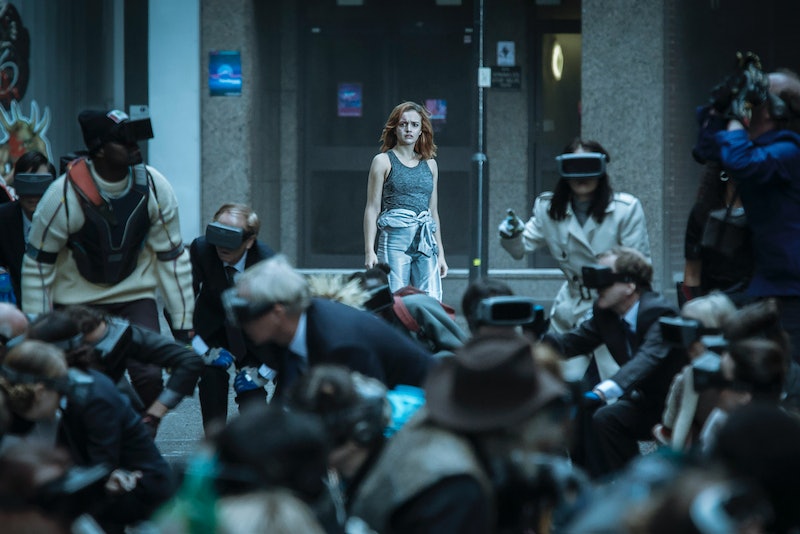 Steven Spielberg is back. OK, he never actually went anywhere; his most recent film, The Post, was nominated for Best Picture at this year's Oscars. But the director of Close Encounters of the Third Kind, E.T., and Jurassic Park hasn't helmed a sci-fi blockbuster in a decade. That's about to change with his latest film, Ready Player One, which looks to be at least as epic and special effects-heavy as anything the filmmaker has ever done. But does all the glitz and gloss mean you should see Ready Player One in 3D, or is 2D an acceptable — or even better — way to take in Spielberg's big return to the science-fiction genre?

The plot of Ready Player One certainly seems like one that could benefit from a 3D viewing. The film takes place in a borderline dystopian future, where real life is so crappy that most people prefer to live out their existence in a virtual reality world known as the OASIS. Since much of the film's action takes place in this virtual world, which is full of computer-generated 3D graphics, it would make sense to watch the movie in 3D to feel as if you, too, are entering the OASIS whenever the characters on screen do. And you'll certainly have the opportunity to do just that, as the film will screen in both Digital 3D and large screen IMAX 3D formats at participating theaters.

However, if you don't want to spring for the 3D upgrade, you technically probably won't be missing anything too revolutionary. While the movie's plot line and virtual world seem like they would lend themselves well to 3D, the film didn't actually use any special 3D cameras in its production that would make it a can't-miss 3D event like Avatar. Instead, Ready Player One was filmed in 2D and converted to 3D after the fact. This is the technique used on most 3D films today, like Black Panther and A Wrinkle in Time, and is considered by many 3D purists to be inferior to native 3D rendering, according to realorfake3D.com.

Ideally, the best way to watch Ready Player One would be in virtual reality, since that's what the movie is all about. And although that experience doesn't exist just yet (I'm sure they're working on it), there are already three Ready Player One virtual reality apps that you can use right now. HTC has partnered with the film to produce a number of VR apps for its Vive headset, and the first three — Battle for the OASIS, Gauntlet, and Rise of the Gunters — all take place within the OASIS, according to venturebeat.com.

Another way the movie has used its connection to real life VR is with tech company Nvidia. At the company's GPU Technology Conference in San Jose, CA, Nvidia showed off its Holodeck tech with a Ready Player One experience. The Holodeck combines real 3D objects, in this case, objects from the film, with a virtual reality experience. That way, users can both see and feel their way around a virtual world from the movie. "Combining physics with natural interactions, NVIDIA Holodeck creates a virtual world that looks and feels real to players, who can interact with virtual objects while exploring richly detailed scenes," Nvidia said in a statement, according to VRfocus.com "It imports complex, detailed models consisting of tens of millions of polygons in real-time VR, making it the perfect environment to showcase the cinema-quality assets of Ready Player One."

Whether you watch Ready Player One in 3D is ultimately up to you, but for the most OASIS-like experience in real life, it may be worth seeking out the film's various VR applications.