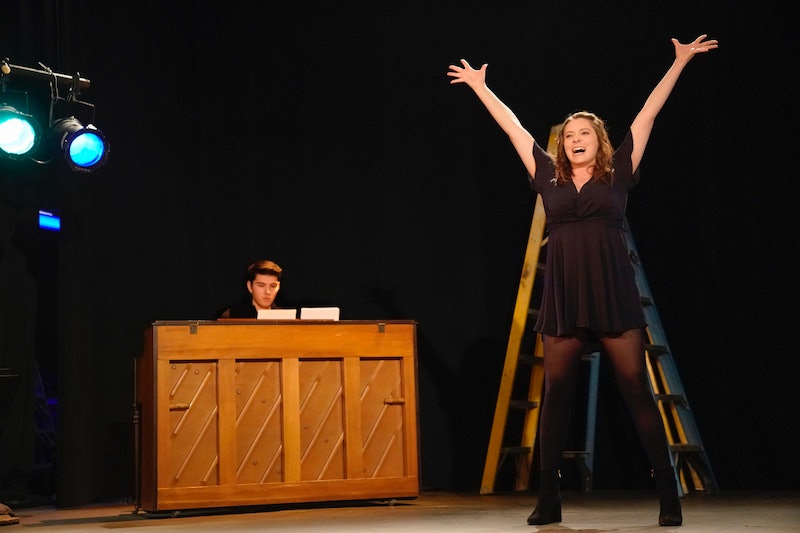 Spoilers ahead for Crazy Ex-Girlfriend Season 4, Episode 14. Rebecca Bunch has been trying to figure out what's next ever since leaving her law practice. It's not manning a pretzel stand, as she's learned, and it may not even be performing in Encore, Elliot!, of which she is a longtime fan. When she joins the local theater production, she's certain it's going to fix all of her problems (as usual, it doesn't). And although musical theater proves to be less fulfilling than she'd built it up to be in her head, Rebecca on Crazy Ex may have just found her calling.

The song she's assigned to perform in the musical is called "Etta Mae's Lament," and while Rebecca is initially excited about it, she discovers that the lyrics are a lot more "retro" than she remembers. "Oh, can someone lasso me a husband? / I'm nothing without a husband," she sings during rehearsal. "The menfolk give me a dollar and a smile / But that don't lead to walking down the aisle." Rebecca grimaces while singing the sexist lyrics, and soon comes to a discouraging realization. "What if these classic musical theater songs that I've loved for so many years and kind of based my life on are...bad?" she asks Josh.

She resolves to write her own, updated version of the tune, which doesn't go over well with the musical's director (played by Cheri O'Teri). Ultimately, Rebecca and Nathaniel are fired from the musical, and Rebecca realizes she's not cut out for the stage. "I'm not a writer-performer! I'm not Ike Barinholtz!" she exclaims to Nathaniel, who was playing the prince.

However, Crazy Ex does seem to be planting the seeds for another potential career avenue — one that Rebecca has been building to for the entirety of her life. As Rebecca discovers when Nathaniel sings her song against the director's wishes, it's pretty cool to hear her words brought to life. "Loving these songs is a part of who I am! I liked what I wrote. I liked the changes that I made," she told him earlier. Perhaps, then, she shouldn't be starring in musicals, but writing them herself.

From its Singin' in the Rain-inspired "We Tapped That Ass" to the not-so-favorable Cats references earlier this season (among countless others), Crazy Ex-Girlfriend has always been a love letter to musical theater. It's is as deeply ingrained in the fabric of the show as it is in Rebecca. She turns to music to make sense of her world, and while, in this episode, she starts to see that her fantasies don't always — or ever? — align with the real world, that could be the exact push she needs to get her head out of the clouds and start funneling her passion into something more substantive.

The final season of Crazy Ex has been all about Rebecca taking ownership of her life for all of its flaws and shortcomings, and writing musicals would allow her to take agency in her career too — giving her the space to do something she loves without being beholden to someone else's outdated vision. And man, would it be the perfect way to bring the show full circle.