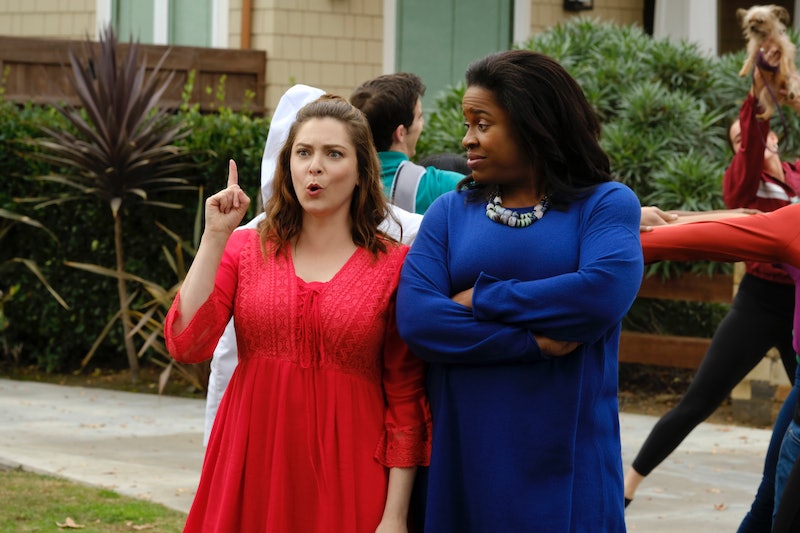 Spoilers ahead for Crazy Ex-Girlfriend Season 4, Episode 13. Ever since Rebecca on Crazy Ex-Girlfriend accepted the fact that she no longer wants to be a lawyer and quit the firm, she's been treading water at Rebetzel's. And while there's nothing wrong with running a pretzel stand, it's not exactly her life's passion. The problem is, however, that she doesn't know what she wants to do — or at least, isn't actively pursuing it. That is, until the Crazy Ex's Feb. 8 episode, when Rebecca chasing pursuing her dream of being a performer.

While it's been established that Rebecca isn't quite the singer that Rachel Bloom is in real life (remember when she tried to sing "In One Indescribable Instant" with Tucker, her attention-seeking step-brother?), she's long held a passion for the stage. So it only makes sense that she would want to try her hand at local theater — after all, it's something Rebecca was likely never allowed to do growing up.

Furthermore, it's no secret that Bunch has a flair for the dramatic. As she tells Josh, "Theater always keeps coming up in my life. Just the other day, I fooled two medical professionals into thinking that I was dead. And I really took on the role, you know? I felt so alive being dead." While she's not being completely truthful (she fell asleep on a gurney and was accidentally taken to the morgue), it's clear that she's genuinely excited about this new chapter of her life.

Rebecca has been making some big strides lately — not only did she go on anti-depressants in the last episode (which has made her hella sleepy), but she and Greg have agreed to be just friends. While he and Rebecca are better versions of themselves, it seems that they're too different to truly be compatible — and they both seem OK with that.

This on its own is a big deal, which makes it even more impressive when she connects some dots at the hospital as to what she really wants to do with her life. To back up a bit, Paula had a heart attack in the last episode and has been bedridden since then. Rebecca is impressed with her best friend's dedication to becoming a lawyer and is jealous of that passionate focus. So when she goes to visit Paula, she sees a flyer for a show called Encore, Elliot! Rebecca recognizes it immediately, and thinks to herself, "I wonder if they're doing the original arrangements or the crappy ones from the movies? Who am I kidding? I'm front row either way."

Immediately after, Bunch falls asleep on the aforementioned gurney (again, she's been hella sleepy) and finds herself locked in a room filled with dead bodies. Even more spooky? Three corpses have the name "Rebecca" on their toe tags. As she narrates through song, as she's wont to do, this whole situation is a bit on the nose. In fact, before Rebecca fully wakes up from her epic nap, we hear two hospital attendants say that being down here really forces you to reevaluate your life. As we know, this is exactly what the Rebetzel's owner proceeds to do.

So while we have no idea whether Rebecca will rock her audition or not, it's exciting to think about her pursuing this new dream (and one that has nothing to do with boys, to boot). As for what this means for the end of Crazy Ex-Girlfriend, perhaps she'll put her overactive imagination to good use and start writing songs of her own. Maybe she'll become a regular performer, or even a drama teacher. But even if Rebecca's theater dream doesn't pan out, at least this one is fully her own.