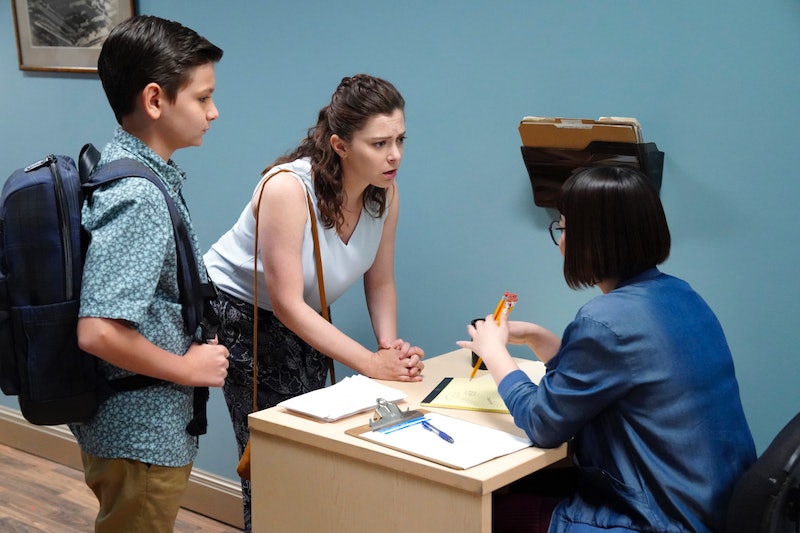 Spoilers ahead for Crazy Ex-Girlfriend Season 4, Episode 4. Young Tucker must fly — in the newest version of Peter Pan: The Musical, that is! In the Nov. 2 episode of Crazy Ex-Girlfriend, Rebecca's half-brother comes for a spontaneous visit to West Covina, claiming that his mom called her several times (Rebecca never checks her voicemail, so she instantly believes him). And while the pair bond immediately (they both love the animated musical, Slumber, and think that pretzels are a funky treat for teens!), it's soon revealed that the pre-teen stole Rebecca's childhood diary and is manipulating her into liking him. That might make it tempting to judge Tucker on Crazy Ex-Girlfriend, but Rebecca sees a lot of herself in him — and in the end, that makes her exactly the person he needs to help put his life back on track.

Tucker is cute, let's be honest. He's bright-eyed, loves to sing, and cinches his backpack a little too tight to be popular at school. In other words, he has friends — he definitely has friends. However, not everyone is charmed by his antics. When he goes in to audition for Pan, he sings a song about wanting to become a messed up child star. Some choice lyrics include, "I want to sue my parents for emancipation after they get caught stealing from me / I want to be on the set of The Walking Dead when I lose my virginity." This doesn't endear him to the director, who cuts him off before he gets to his actual audition song (because apparently that was just his warm-up??).

It's here that we get a glimpse of what will surely be Rebecca's future as a hovering stage mom (one could say she's so maternal). She immediately begins pacing while her brother is auditioning, and when Tucker tearfully tells her what happened, she's determined to get him a second chance. So, she dresses up like a bell hop and forces the director to listen to Tucker sing a few bars from "In One Indescribable Instant" in her hotel room. This technically means she's up to her old tricks again, but this time she's doing it for Tucker, and even though it obviously doesn't work, it's clear Rebecca has changed. When she uncovers that Tucker has made a deal with Nathaniel to bribe the director into giving him the part, she quickly shuts it down.

Late, it comes out that Tucker has just been mimicking Rebecca's personality, but they still have a lot in common. He may not say "Gasp!" or put sugar in his milk, but his self-esteem is awful, he has a nonexistent relationship with their dad, and he's got some un-addressed mental health concerns. He's a Bunch, after all! Rebecca recognizes theses similarities, which allows her to do some revisionist history. She calls Tucker's mother (who has gotten divorced from their dad) and recommends that he start going to therapy. "That's what I needed when I was your age," Rebecca reassures him.

Afterwards, she calls their dad (which was likely very difficult for her) and makes him agree that, instead of working construction, which apparently poor Tucker has been doing each summer, he will go to theater camp. "Also, I'm paying for theater camp, and also I'm paying to replace you at the construction site this summer, because he is literally the worst person," she adds. These are two things that Tucker clearly needs — outlets to express himself, both creatively and emotionally. However, Rebecca tells him that he can't do the musical, even though he technically got the part. "You lied and schemed to get it," she tells him. "You didn't earn it."

It's sad that Rebecca didn't have this kind of guidance when she was young, but history doesn't have to repeat itself this time around. Through this interaction, it's clear how far Rebecca's come since Season 1. She's starting to take care of herself, yes, but she's also proven that she's capable of looking out for other people. And since it's revealed in this episode that Rebecca can't actually sing ("Gasp!"), at least Tucker will be able to cary the musical baton for the both of them.