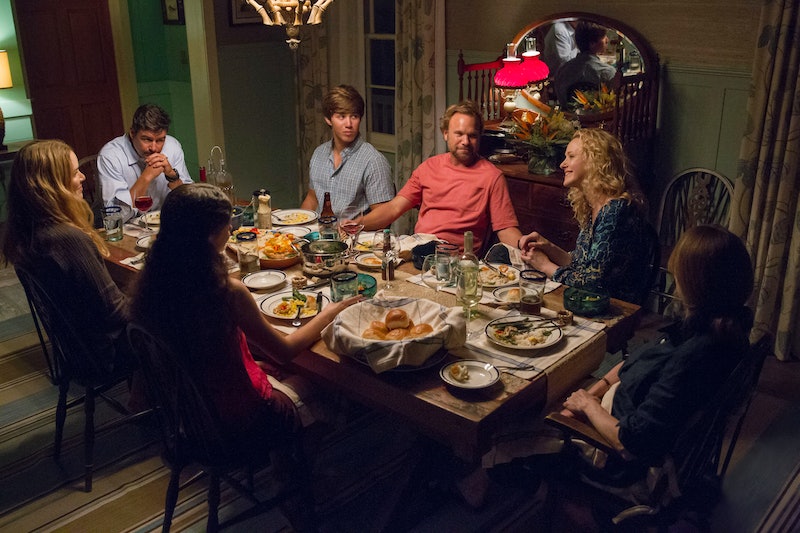 Saeed Adyani/Netflix
By Jefferson Grubbs
May 26, 2017

Danny Rayburn, black sheep of his wealthy Florida family, is dead… but that doesn't mean the saga of the Rayburns is over. He left behind siblings, parents, and children who are all reeling in his wake — so it's no shame if you need a brief Bloodline Season 2 recap to untangle all the complicated relationships and interwoven storylines on Netflix's bleakest family drama.

While it was sad to see Emmy-winner Ben Mendelsohn's captivating character killed off at the end of Season 1, viewers knew it was coming from the flash-forwards in the series premiere; but the show still found ways to keep Danny around, utilizing the deceased Rayburn in flashbacks as well as visions conjured by his brother/killer John's guilt-wracked mind.

So, where did things go from there? Nowhere good, as you might expect. In the second season, remaining Rayburn siblings John, Kevin, and Meg try desperately to cover their own tracks while dealing with the new wrinkle of the arrival of Danny's secret son, Nolan. Eventually, things unraveled to a place where Season 3 is virtually guaranteed to be a hot, sweaty mess of backstabbing, guilty consciences, and (almost certainly) murder.

Here's where things left off for the Rayburn clan at the end of Season 2:

Shortly after killing his older brother, John Rayburn decided it would be a great time to run for sheriff. In his defense, while that couldn't possibly seem like a worse idea, he actually had his reasons: If he was sheriff, he could manipulate or even shut down the investigation into Danny's murder. But still, the campaign put John into the spotlight just at the wrong time.

He also learned that, before he died, Danny made a tape that incriminated John and handed it off to local drug baron Wayne Lowry. Lowry uses the tape to blackmail John… but when he's murdered by the vengeful father of the young woman whose corpse was discovered in the series premiere, the tape is seemingly lost. (Don't worry, it'll pop back up again later.)

Ultimately, John is hit with a triple whammy: His wife, Diana, figures out that he killed Danny and banishes him from the house; Danny's friend Eric O'Bannon was on the beach the morning that John murdered his brother; and a nearby security camera caught him, Kevin, and Meg all driving to and from the spot where Danny was killed. Although he threatens to kill Eric if he testifies against him, John can't go through with it… and ends the season driving away from his hometown with Ghost Danny in the passenger seat.

Oh, Kevin. The perennial screw-up screwed up bigger than ever in Season 2. Despite the fact that he had finally repaired his relationship with his pregnant wife, Kevin couldn't hold it together in the face of his brother's murder and his complicity in it. Not only does he start drinking and doing drugs again, but he sells his failing marina business to Roy Gilbert, the same affable millionaire who is funding John's campaign for sheriff. Only Gilbert maybe isn't so affable and is definitely shady, since it's revealed in the finale that he's the one in possession of Danny's tape post-Lowry's murder.

As if all that wasn't bad enough, Kevin snaps when he finds out that John's partner (and his sister Meg's lover) Marco is hot on their trail, putting the pieces of Danny's murder together. Kevin tries to save himself by confessing that John did the dirty deed, but Marco reveals that he and Meg will still be going to prison for their role in covering it up. Afraid of losing his family, Kevin murders the detective, bashing his head in with a tacky dolphin statue. RIP, Marco.

Although Season 1 ended with Meg accepting a job offer in New York City from Alec (the guy she cheated on Marco with), that life change didn't last long; the Rayburn sis soon finds herself drawn back to Florida, and she lost her shiny new job in the process. Instead, Meg takes a gig as John's campaign manager — a job that will lead her directly into conflict with her ex-boyfriend.

When she discovers that John's opponent, current Sheriff Aguirre, had a possible history of domestic abuse, she leaks the information to the press… only for it to be revealed that the responding officer to the domestic dispute turns out to have been Marco, who agreed to cover it up for Aguirre in exchange for a promotion from beat cop to detective. With her relationship to Marco finally destroyed for good (although she doesn't yet know that he's been killed by Kevin) and knowing that she's been implicated in Danny's murder thanks to that security tape, Meg ends the season by going to confess everything to her mother.

Speaking of the Rayburn matriarch, Sally spends most of Season 2 dealing with the sudden revelation of her secret grandchild, Nolan — and tangling with his mother, Eve. It turns out that her husband, Robert, had been sending Eve and Nolan money (a fact that Meg hid from her mother because she assumed her father was having an affair), but once Robert died, the money stopped; so Eve and her criminal friend Ozzy, a former pal of Danny's, are scheming to get money out of the Rayburns.

However, Eve and Nolan end up surprising themselves by actually bonding with Sally, and Eve decides to stay with her pseudo-mother-in-law rather than execute her scheme with Ozzy.

In flashbacks, Nolan's history with his father is revealed. Robert was giving Danny money to help care for his son, but when Danny asked for more money to open a restaurant, Papa Rayburn gave him an ultimatum. Danny had to choose: money for his son, or money for his restaurant. Danny chose Nolan, but with no money left to sustain his business, he had to resort to smuggling drugs in order to juggle both his child and his dream.

Ultimately, it's revealed that Nolan burned down the restaurant, hoping his father would get insurance money. But the loss of his business is what drove Danny to return home in Season 1 — which of course led to Danny's death — so Nolan has been blaming himself for his father's murder all along.

Where is John headed? Will Kevin get caught for murdering Marco? Did Meg really tell her mother the truth? How will Sally and Eve deal with Ozzy? Can Nolan ever forgive himself? These lingering questions will all come to a head when the third and final season of Bloodline debuts on Netflix on Friday, May 26.