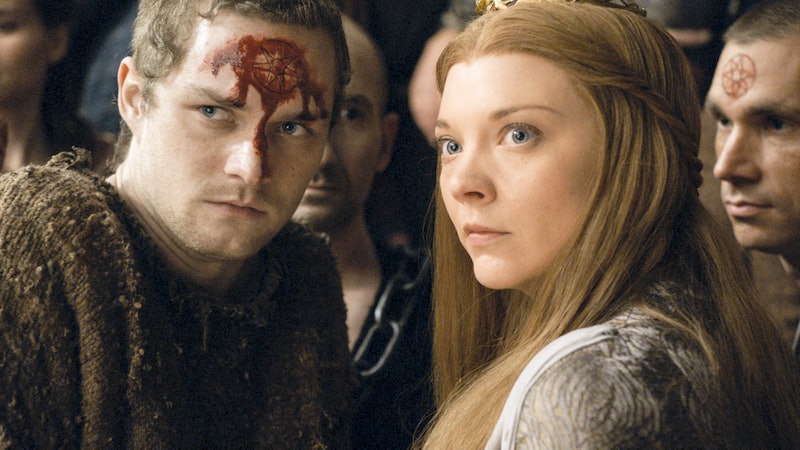 Over the past 60 episodes of Game Of Thrones, there have been 43 main characters (and hundreds of supporting players) scattered across seven kingdoms and two continents. There's no shame if you need a brief Game Of Thrones Season 6 recap before you dive headfirst into the "Great War" that Jon Snow has promised fans is coming in the Season 7 trailer.

The final conflict between the White Walkers and Dany's dragons many finally be around the corner… but there's plenty of history that brought the show to this point, from the War of the Five Kings to the Red Wedding, from the Battle of Castle Black to the Battle of the Bastards, from the Sack of Slaver's Bay to the Dance of Dragons. It's enough to make even the most seasoned viewer's head spin.

Season 6 alone was packed with some of the most eventful episodes in the show's history, from the mournful premiere (R.I.P for now, Jon Snow) to the explosive finale (R.I.P forever, Tyrells). Along the way there were more twists, schemes, and deaths than you could count.

Let's thank the Seven that Season 7 is almost here by breaking down last season's major happenings into seven geographical regions:

Reeling from her Walk of Atonement, Cersei announced that the undead Gregor Clegane would serve as her champion in her trial against the Faith Militant. But when King Tommen, under the influence of the High Sparrow, outlawed the practice of trial by combat, Cersei was left with little recourse other than to violently eliminate her opposition by blowing up the Sept of Baelor with wildfire, killing the High Sparrow along with Margaery, Loras, and Mace Tyrell and Kevan and Lancel Lannister.

Also, Qyburn's "little birds" murdered Grand Maester Pycelle and, despondent over the death of his wife, Tommen took his own life. With all her children dead, Cersei took the Iron Throne for herself.

At the Wall, Melisandre resurrected Jon Snow, who promptly executed all the men who had betrayed him and quit the Night's Watch. Meanwhile, Sansa and Theon were rescued by Brienne and Podrick, who took Sansa to Castle Black. (Theon returned home to Pyke.)

When Ramsay captured the long-absent Rickon Stark, Sansa convinced Jon to march against Winterfell to save their brother and retake their family's castle. Ramsay's forces outnumbered their own, but when all hope seemed lost, Littlefinger showed up with the Knights of the Vale (as part of a secret pact he'd made with Sansa) and saved the day.

A victorious Sansa fed Ramsay to his own hounds, and a victorious Jon was crowned King in the North. Oh, and Davos found out that Melisandre burned Shireen at the stake, so Jon exiled the red priestess.

After sailing off on Drogon, Daenerys was captured by the Dothraki and taken to Vaes Dothrak. She managed to turn defeat into victory by flambéing all the khals and claiming their people as her own giant khalasar.

Although Tyrion did his best to keep the peace in Meereen while the queen was away, Dany returned to find the city under siege by the combined forces of Astapor and Yunkai — but her dragons made quick work of their fleet. She bid farewell to boy toy Daario Naharis, officially declared Tyrion her Hand of the Queen, and finally set sail for Westeros.

After completing her blind-ninja training, Arya's sight was restored and she was given her first target: an actress named Lady Crane. But when Arya befriended Crane instead of murdering her, Jaqen gave the Waif permission to assassinate Arya. Fortunately, Arya got the drop on her would-be killer, quit the Faceless Men, and sailed back home to Westeros.

Dismissed from the Kingsguard by Tommen, Jaime was dispatched to end the siege of Riverrun. He threatened Edmure (captive since the Red Wedding) into convincing the Tully troops to stand down. Only Brynden "the Blackfish" was killed when he refused to surrender.

Sandor Clegane turned up alive, rescued from near death by kindly septon Brother Ray. However, the Hound's new companions were slaughtered by rogue members of the Brotherhood Without Banners; in pursuit of vengeance, Sandor ran into Beric Dondarrion and Thoros of Myr, and agreed to accompany them north to fight the White Walkers.

After arriving in Westeros, Arya's first stop was the Twins, where she baked Walder Frey's sons into a pie (which he ate) and assassinated the man who killed her mother and brother at the Red Wedding.

Offscreen for all of Season 5, Bran returned only for his tutelage under the Three-Eyed Raven to be cut short by the Night King, who branded Bran with a magical mark during a vision. The mark allowed the White Walkers to penetrate the cave and kill the Raven, Leaf, Summer, and Hodor.

Bran and Meera were rescued by half-wight Benjen Stark, and Bran received one last vision: young Ned Stark fighting to rescue Lyanna from the Tower of Joy, where she had been taken by Rhaegar Targaryen, only to find his sister cradling a newborn baby… named Jon Snow.

In Dorne, Ellaria Sand and the Sand Snakes staged a coup against Prince Doran Martell, after which they allied with Varys and a grieving Olenna Tyrell in support of Daenerys.

In the Iron Islands, Euron Greyjoy killed his brother Balon, crowning himself king and declaring his intention to marry Daenerys. Before he could kill Theon and Yara, they absconded to offer their services to Daenerys first.

In the Reach, Sam (with Gilly in tow) dropped in on his family — and stole his father's Valyrian steel sword — before heading to Oldtown to begin his studies as a maester.

With the show approaching its endgame, it will be fascinating to watch these disparate storylines intersect as the world of Game Of Thrones becomes ever smaller. Find out what happens next when Season 7 premieres on July 16.