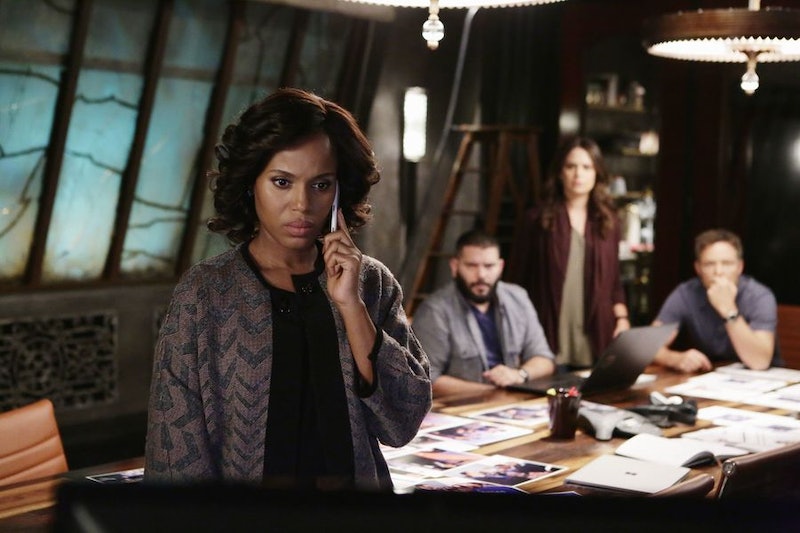 Remember that TGIT show Scandal, my friends? It hasn’t been on television since May 2016, which is almost a year and way too long not to have Kerry Washington lighting up my screen and solving every problem in Washington, D.C. Sure, she had a baby and deserved the time off, but I missed her! Anywho, nine months is a very long time to be away from a complicated, plot-heavy show like this one, so here's a recap Season 5 of Scandal to check out before Thursday evening. That way you'll be all fresh and ready for Season 6.

My one and only complaint with Scandal is the complaint of other shows that Shonda Rhimes produces or helms — there’s so much going on. Normally, I’m down with a show like that, because it forces me to tune in every week, but if you miss, say, three weeks of Scandal, you need to watch all three weeks before you can tune into the new episode. You’re setting me and my busy schedule up for failure, Shonda. Thankfully, I have a DVR because TV is my job and because I do love Scandal, so I don't want to go too long without being all caught up. Season 5 of Scandal covered a lot of ground from chair murder to dealing with Command (STILL and forever, probably), so let’s get started, shall we?

The main romance on Scandal will always be about Olivia and Fitz. They’re together, they’re not together, they’re together, etc., on and on until the end of time. At the beginning of Season 5, Olivia and Fitz are still cheating on Mellie together, but it’s not until Olivia is asked by the press if she is Fitz’s mistress that her answer (“yes,” by the way) pushes them into the public eye. Of course, a mistress is scorned by the public as a whore, so OPA has to do some serious spinning to make Olivia into America’s princess. Turns out that Olivia feels suffocated in that role, so at the mid-season finale of Season 5, she pretty much gives it up, walking away from Fitz and the White House. She also has an abortion in the first half of Season 5 (it’s Fitz’s child), and when he finds out, he’s not that happy. That cements the end for them, at least for now.

After Olivia and Fitz are broken up, Fitz goes on a tear, sleeping with half the available women in Washington, and Abby lets him know she thinks this behavior is inappropriate. Olivia still has feelings for Jake, but she focuses all of her energy into making Mellie the next President of the United States. This is good, because Olivia works best when unencumbered by men. Also, Charlie and Quinn are still sort of together, David Rosen gets into a love triangle with Elizabeth North and Susan Ross, and Cyrus and Michael do that back-and-forth dance that Cyrus probably learned while working for Fitz.

If the first half of the season focused a lot on cases of the week and Olivia and Fitz and the fallout from their relationship, the second half of Season 5 of Scandal was all about power — how to find it, take it, and keep it. Olivia is trying to make Mellie president, Liz North (and Fitz, too) want Susan Ross (who is woefully underprepared at first) to be president, and Cyrus is trying to make fetch happen in the name of Frankie Vargas, the governor of Pennsylvania. Cyrus is the king of collusion, and he, with the help of trusty Secret Service/B613 Tom, set up an active shooter situation so that Vargas can unknowingly be the hero. All sides are trying to get an advantage on the others, so there is plenty of blackmail and secrets and Olivia’s old beau, Edison, stops by for a whirl, too.

The problems: Susan has no experience; Frankie doesn’t know he’s been set up to run; and the country hates Mellie, because they think she’s stuck up. Eventually, Cyrus positions himself to be Frankie’s running mate, Susan drops out, and Mellie grabs ahold of Jake Ballard as her vice president pick, and who would let go of Scott Foley’s dreamy eyes? The disgusting Hollis Doyle is also running for president, and it’s gross and very familiar with recent politics. We leave on the eve of the election, and Season 6 will show the winner (I hope).

The case-of-the-week files for Season 5 of Scandal included a dead princess, a Secret Service cover up, and a rich kid who killed his dad, which is pretty par to the course. But some other interesting stuff happened, too — civil rights activist and former OPA client Marcus Webb became a gladiator; Mellie filibustered an anti-abortion bill and all of the women rallied around her; Fitz was nearly impeached (finally); Jake killed his new wife’s dad because he's back with Poppa Pope; Olivia beat Andrew, the old vice president, to death with a chair because he threatened to expose a bunch of lies; and Rowan played the daddy-daughter games he always does. It’s nice to know that some things stay the same on Scandal, huh?

There you have it, folks — the complicated, often-imitated, never-duplicated road of Scandal. Let’s hope that Season 6 is just a tad slower than Season 5, huh? My heart can't take what's going on in the real world and all this too.