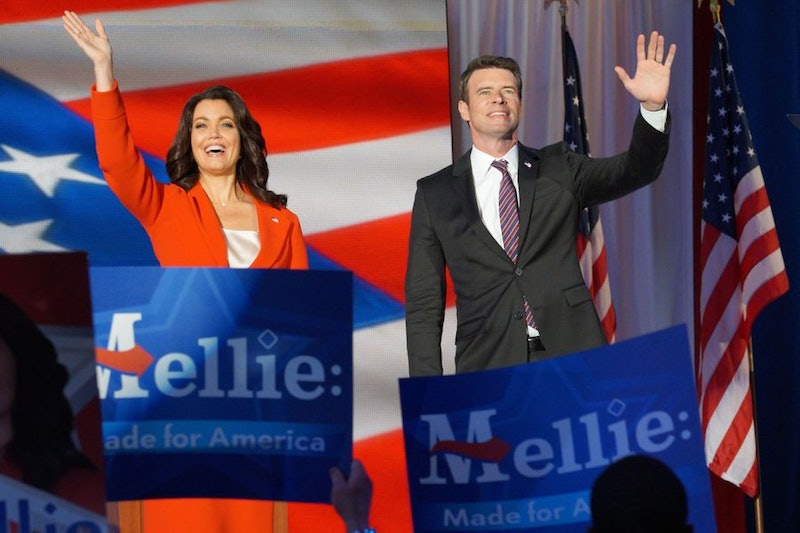 You could be living under a rock, without having ever watched an episode of Scandal in your life, and you would still know that Mellie Grant would be the best damn president TV has ever seen. Mellie (Bellamy Young) has seen it all throughout the last few years and has been through the ringer, which is why she would come into the White House mentally prepared, guns blazing. Turns out, the real-life men of the show agree and if Scandal Season 6 actually gives us President Mellie, there will be some happy guys in the cast.

When catching up with Brian Letscher (who plays Tom) and George Newbern (Charlie) at Entertainment Weekly's pre-Emmy party over the weekend, these guys gave A+ predictions of what it would be like with Mellie taking office and gave a bit of exclusive insight about what fans can expect when the series returns this winter. Off the bat, Newbern reveals that Shonda Rhimes and her team are concocting a return that "mirrors what's going on in the real election." Needless to say, things will get interesting.

In case you need a refresher, Season 5 ended with Mellie announcing her running mate (hi, Jake) at the Republican National Convention. They're conveniently running against Frankie Vargas (Ricardo Chavira) and his vice presidential candidate, Cyrus (Jeff Perry). Both Letscher and Newbern see the resemblance of their series' own storyline to actual history in action — our 2016 election with Hillary Clinton.

"Mellie would definitely bring a lot of different elements to being president, just like Hillary Clinton would probably bring a lot," says Newbern, adding that he also loves Mellie's DGAF attitude. "I'm from the south and I think she has a real sort of sassy, realistic thing. [Fitz]'s very put-together, I think she has a more, very accessible vibe," he says.

Letscher knows Fitz put Mellie through hell, which is why she'd be so heavily-armed as president. "She's gone through so much and changed so much," he says. Does he think Mellie would be more fit for the office than Fitz? Probably. "Fitz got the office by nefarious means as well but he didn't find that out until he got there, so he sort of was starting with this open, clean heart," the actor explains. "Mellie's already been through a lot to get there. I think she'd be pretty tough, seriously tough. A ton of experience, she's been through all the scandals, I think she would kick ass in the white house." Amen.

Aside from (fingers crossed) Mellie's domination, what can fans expect when the crew returns next season? Well, the actors couldn't say much, but Letscher confirms that Tom is pissed (after being dumped by Cyrus), and he'll probably raise hell. "I got dumped at the end of Season 5 by Cyrus, who left me hanging to go be a presidential candidate. Which, that's fine if he wants to be the Vice President, but I don't like being dumped," he says. "Tom's a little bitter, deeply betrayed and angry. Angry Tom is a dangerous thing. He's angry."

And of course, there's always Vermont. Or is there?

"Vermont is always on the radar, it can't not be," says Letscher. "That kind of love, I don't think goes away. Whatever Vermont looks like would be amazing ... It's definitely [where] they're not together right now ... Once it becomes Vermont, then the story's over," he explains. Fair enough.

In short, Mellie's badassery seems to be on the forecast for Season 6 and as long as Vermont isn't totally out of the picture, I'm a happy girl.