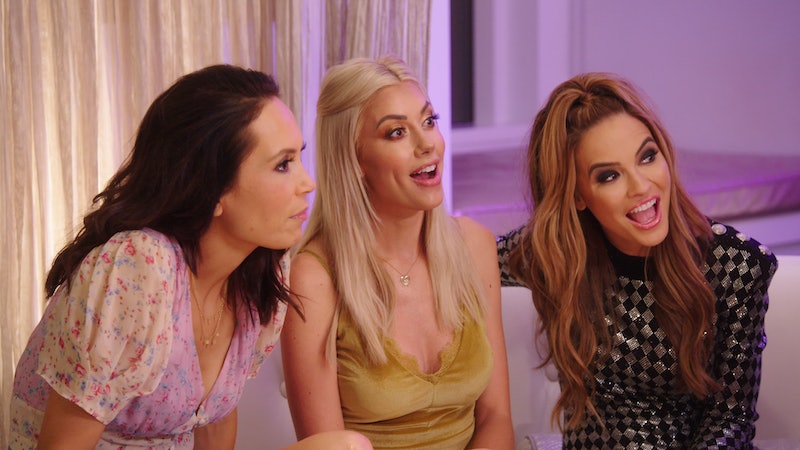 The Oppenheim Group women are still selling luxe homes and stirring up drama in Selling Sunset Season 2, which picks up just a few months after the events of Season 1. For viewers, however, it's been nearly a year since Chrishell, Maya, Mary, Christine, Heather, and Davina were last onscreen. So you may need a Selling Sunset Season 1 recap before pressing play.

The final episode, which aired in March 2019, began with a company pool party that blew open all the tensions and resentments that had been brewing throughout the season. On the business side of things, both the $40 million mansion and the $10 million home from the premiere episode were left without buyers. Here's how each of the women's storylines left off.

Actor-turned-real-estate-agent Chrishell came in as a newcomer to The Oppenheim Group and had to learn the ropes of selling homes (and dealing with finicky buyers) from Maya. She immediately clashed with senior agents like Christine and Davina, who didn't buy her rose-from-poverty backstory or her sweetheart persona, even calling her first big sell "beginner's luck." This spilled out at a a company pool party in the final episode, where Davina and Christine repeatedly accused Chrishell of being "two-faced" because she'd gossiped about Mary's relationship behind her back. It was an overblown fight, and after all attempts to calm Christine down failed, Chrishell walked out. She later shared an awkwardly forced hug with Christine at the behest of Jason and Brett; though Christine apologized at the billboard unveiling, it appeared that Chrishell had no intention of ever forgiving her.

Though the most experienced seller at the brokerage, Mary's Season 1 storyline was more personal than professional. She revealed that she was dating Romain, a French model 12 years her junior. They worked well despite the age difference and slight language barrier, but cracks started to show throughout the season. First Romain hinted that he felt like he was "missing out" by dating Mary, then he revealed that he didn't want kids until five or 10 years into the future, which Mary saw as a huge problem at 38 years old. Nonetheless, Romain proposed to her, and Season 2 will cover their wedding plans and eventual walk down the aisle.

Good-natured Maya was spotted politely turning down drinks in the premiere, and she finally revealed she was pregnant with her currently long-distance husband. Maya had a gender reveal cake brought into the finale pool party, and announced she was having a baby boy.

The source of most of the drama, Christine ended Season 1 on the outs with Chrishell and perhaps even the rest of the women after the pool party fiasco. (Getting too drunk and accusing a coworker of having dementia despite everyone trying to deescalate the situation tends to do that!) Christine also ran into another kind of work trouble: she fumbled her double-ended deal after failing to ensure her house would be unlocked for Heather's client. The seller of the $10 million home unhappily reduced the price as a result, putting the pressure on Christine to get it sold.

Heather was head over heels for her Sweden-based hockey boyfriend in Season 1, but their relationship got in the way of her professional life. She just seemed pretty distracted all season, and near the end her client failed to show up to an important meeting with the $40 million home builder.

We never saw much of Davina except when she swanned in to make a mean comment, especially if it was about Chrishell. She shot back at Chrishell when she talked about the importance of charity work, and was also the one to instigate the "two-faced" comments at the pool party. Will we actual see Davina's professional side going forward?

It would make sense for the women to get over their personal squabbles and work as a team in Season 2, but we all know in reality TV land that's not likely to happen any time soon.

More like this
RHOP’s Robyn Dixon Explained Why Juan Paid For Another Woman's Hotel Room
By Brad Witter
Rachel Responded To 'Bachelor' Fan Theories About Her TikTok With Clayton
By Grace Wehniainen
Erika Jayne's Estranged Husband Tom Girardi Has Been Indicted On Fraud Charges
By Jake Viswanath
Everything To Know About A Potential 'RHODubai' Season 2
By Kadin Burnett and Brad Witter
Get Even More From Bustle — Sign Up For The Newsletter
From hair trends to relationship advice, our daily newsletter has everything you need to sound like a person who’s on TikTok, even if you aren’t.