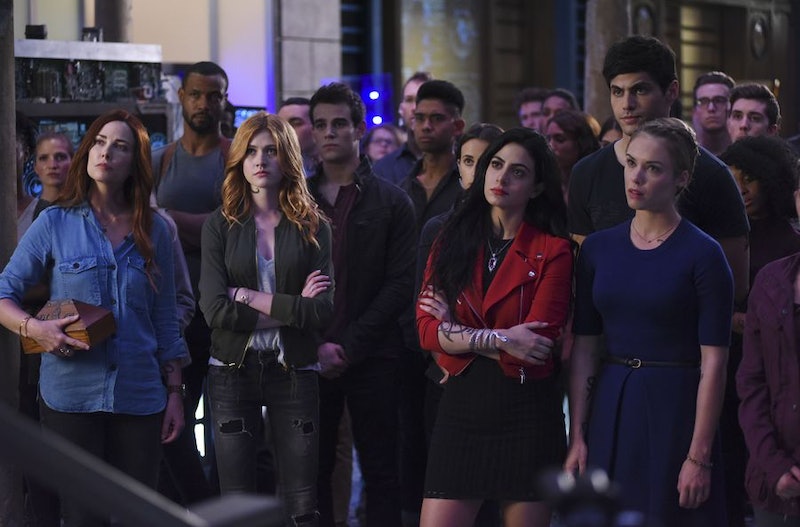 Freeform's Shadowhunters was an exercise in an ambitious fantasy done with a basic cable budget. Like similar experiments with teen-aimed genre shows on networks like The CW, the result was an earnest series that may not have reached the heights of, say, Game of Thrones, but made a solid first impression. The show's fans — of both The Mortal Instruments book series that it's based on and the TV series itself — were numerous enough to bring Shadowhunters back for Season 2. With the premiere of that new season on the horizon, it's time to recap Shadowhunters Season 1 to make sure you know your Downworlders from your mundanes. Whether you haven't watched the season since it first aired or if you just want to jump into Season 2, this recap should help you understand the main events of the debut season.

Shadowhunters takes place in New York City, where a young woman named Clary comes of age and is told that she's actually the heir to a legacy of underground, magical creatures called the Nephilim. They are part demon, part angel, and control the magical world, making sure that magical elements don't escape. So begins the first episode of Shadowhunters, and things only get better from there.

Clary's mother, a former member of the "The Circle" (Nephilim who should protect the separation between the regular world and the magical Downworld) is kidnapped by Valentine, the head of the fringe, evil group of Shadowhunters. In order to save her mom, Clary is forced to abandon almost all she knows in order to join with brooding, handsome Shadowhunter Jace and the rest of his crew.

The non-Circle, good Shadowhunters determine that Clary's memories, which she's blocked from accessing, might hold the secret to finding her mother and stopping Valentine, who is her biological father.

Clary's mundane friend Simon is kidnapped by vampires, and while he's ultimately rescued by Jace and his adopted siblings Isabelle and Alec, Simon is bitten by a vampire and begins to fit in with the Downworlders.

A search for Clary's memories, which were hidden by a warlock, Magnus, turns up nothing after the warlock wanted the other Shadowhunters to give up their treasured memories in payment. Meanwhile, Simon and Alec struggle with their feelings for Jace — antipathy and romance, respectively.

Defying orders, Clary escapes back to the regular world with Simon, where werewolves kidnap them. Luckily, they're rescued by Luke, Clary's mother's boyfriend, who also happens to be a werewolf hiding in the mundane world.

Episode 6: "Of Men and Angels"

Luke's injuries at the hands of his fellow werewolves push warlock Magnus to reveal some of Clary's memories, opening her to using some of her Shadowhunter powers and figuring out where the powerful artifact the Mortal Cup is being hidden.

Their search for the cup, hidden safely at Luke's office, only results in carnage, but the Shadowhunters are able to protect and obtain the cup. Also notable, Jace and Clary seal their developing romance with a kiss.

Inter-angel politics get tangled, and Alec suppresses his feelings for Jace in order to propose to Lydia, the new leader of the Institute (think a bureaucracy crossed with an embassy). Simon is turned into a vampire, but is conflicted about becoming a "monster." Valentine sends an actual monster, called a Foresaken, to attack the Shadowhunters.

With the help of a faerie, Meliorn, the Shadowhunters protect the Mortal Cup from all comers, including Lydia and Alec.

Magnus takes Clary through magical portals that can transport the traveler to different dimensions, where she can see the effects of different changes — like a peaceful world without Shadowhunters. She pieces together where Valentine's new hideout is, and see that Jace's father is being hidden there.

A confrontation with Valentine nearly results in him stealing the cup, but while he evades capture, Clary and Jace are able to both rescue Clary's mother and prove to the Institute once and for all that they have the Mortal Cup in hand. Oh, and Valentine's biggest bombshell? The news that Clary and Jace are actually... siblings.

Alec stays true to his heart and leaves his wedding in order to confess his real feelings to Magnus, ending in a new romance between the two. Clary and co. are betrayed by Hodge, another former Circle member who steals the cup from Lydia.

The vampire who turned Simon helps the Shadowhunters look for the Book of the White, a powerful spellbook. Valentine gets the Cup and begins building his army. The season ends on a bittersweet note when the team fails to stop Valentine, but succeed in waking Clary's rescued mother.

So yes, a lot happened in Shadowhunters Season 1, but based on how it ended, Season 2 will have even more drama and action in store.