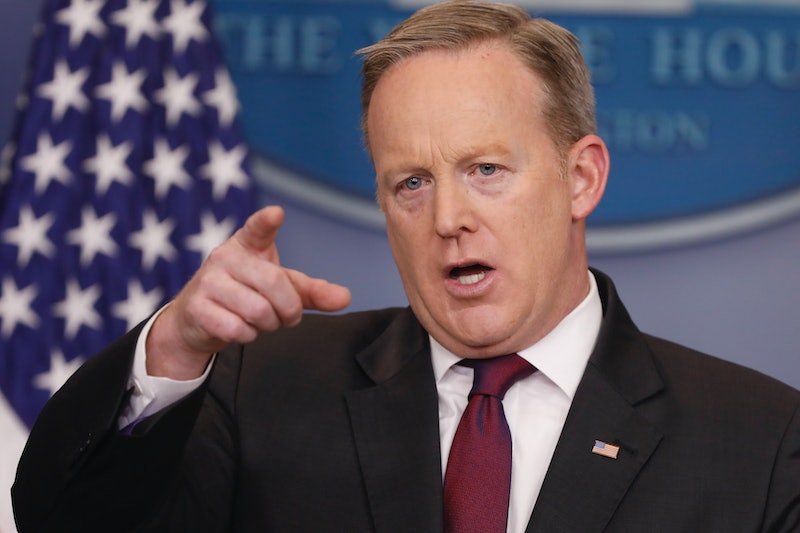 Remember when states like Alaska and California legalized the use of recreational marijuana? Well, President Donald Trump’s administration could reportedly try to cut down on that. On Feb. 23, White House press secretary Sean Spicer said federal laws against recreational marijuana use will likely be enforced, leading to outcry among those who support legalization.

Recreational marijuana is currently legal in eight states, but technically marijuana is illegal on the federal level. It does seem, however, like this idea of the federal laws superseding state laws is the opposite of Trump's campaign promises to enforce states' rights. For instance, the Trump administration took the stance that the protection of transgender students' rights "is a states’ rights issue and not one for the federal government," as Spicer told Politico. Somehow, this type of reasoning doesn't seem to apply to recreational marijuana. When asked during a briefing about states' rights, Spicer said, "I think that's a question for the Department of Justice — I do believe that you'll see greater enforcement of it [marijuana]," Business Insider reported.

But at least Trump won't be cracking down on medical marijuana, which is currently legal in 30 states. “The president understands the pain and suffering that many people go through who are facing, especially terminal diseases, and the comfort that some of these drugs, including medical marijuana, can bring to them,” Spicer said, according to the Washington Post.

“You see the opioid addiction crisis blossoming, the last thing we should be doing is encouraging” marijuana use, Spicer told reporters. But Spicer's claim about opioid addiction is actually misleading. A 2017 review of scientific literature found “limited evidence that cannabis use increases the rate of initiating other drug use," according to the National Academy of Sciences. And some experts’ research suggests that cannabidiol, an element in marijuana, could actually be used to help treat opioid addiction, Quartz reported.

There's another problem with enforcing federal laws against marijuana use — voter approval. “If the administration is looking for ways to become less popular, cracking down on voter-approved marijuana laws would be a great way to do it,” Tom Angell, chairman of the pro-legalization Marijuana Majority, told USA Today.

More than 70 percent of Americans in the eight states where recreational marijuana is legal would “oppose efforts to enforce federal marijuana laws,” according to a Quinnipiac University poll. Additionally, 93 percent of voters support medical marijuana, and 59 percent support overall legalization of the substance, according to the same poll.

We'll have to wait for word from the Justice Department before taking Spicer's words at face value, but for now the fate of recreational marijuana use in the United States could go either way.