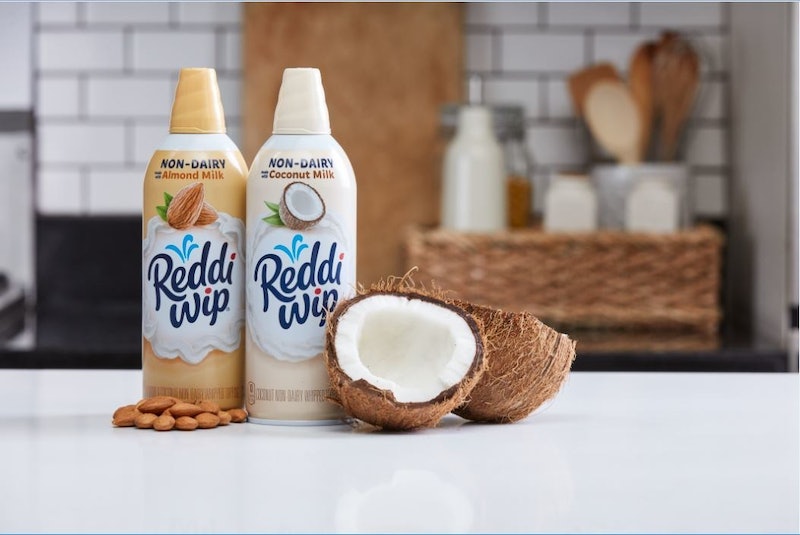 It's two in the morning. Maybe you are just returning home from a night out, or maybe you are just waking up. For whatever reason you find yourself in the kitchen, staring aimlessly into the refrigerator. The scene is bleak. You've almost given up your quest for a satisfying midnight snack when you see it, sitting in a shelf on the door. Nestled between miscellaneous condiments is your saving grace: whipped cream. Now, even those who don't eat dairy can experience the late night nozzle snacks with Reddi-wip's new Non-Dairy Almond and Coconut whipped toppings.

According to a press release issued on Monday, widespread demand for more plant-based alternatives to common foods led Reddi-wip to develop not one, but TWO varieties of whipped topping made from nondairy alternatives. Both varieties of non-dairy whipped topping are free of artificial flavors and preservatives, and gluten. As they are free of dairy ingredients, both the almond and coconut whipped creams are also vegan.

Ryan Clark, the president of the Refrigerated and Frozen division at Conagra Brands (Reddi-Wip's parent company), spoke to the decision to add a non-dairy option to the Reddi-Wip lineup in the press release. "This is an exciting innovation for Reddi-Wip that addresses this broader consumer demand and the requests we've received from consumers asking us to bring a non-dairy variety to market," said Clark. It is also reflective of a nationwide shift to non-dairy options over those made with traditional cow's milk. In the press release, Conagra cites a statistic from global market research firm Mintel International, that states non-dairy milk sales rose 61 percent in in the United States over the last five years. Research also reveals almond and coconut are two of the most popular kinds of non-dairy milk purchased instead of dairy milk, with 64 percent of the market share being occupied by the former, and 12 percent being occupied by the latter.

It is true nondairy milk is taking the culinary world by storm. While five years ago the public may have been skeptical about drinking a beverage made from nuts, now it is difficult to find a mainstream coffee chain that doesn't offer almond milk. Reddi-Wip is just the most recent of many dessert lines to get in on the non-dairy action. Last fall, makers of the wildly popular light ice cream brand Halo Top added a number of non-dairy options to its lineup of protein-packed pints.

Ever since its inception in 2012, Halo Top has risen the ice cream ranks in the US. Last September it even earned the title of being the country's most popular pint, beating out longstanding classic brands like Ben & Jerry's and Haagen-Daazs. The brand even earned a place on Time's ranking of the 25 Best Inventions of 2017. But, for a while, ice cream lovers who don't eat dairy had to abstain from getting in on the Halo Top craze.

Luckily when the vegans called, Halo Top answered in a big way. Not only did brand add a nondairy option to its expansive lineup of flavors, it added seven. Since then, it has doubled its number of nondairy flavors, with the addition of ones like Vanilla Maple, Toasted Coconut, and of course, Birthday Cake.

So listen up, non-cow milk drinkers: you may have had some major FOMO in the past. But now your beverage of choice is taking over grocery store shelves, and the world. Next time you're craving a sweet treat, your options won't be limited to boring, cream-less confections. You can indulge in a dairy-like dessert with Reddi-wip's TWO new whipped topping options. Word is that cans began shipping to retailers late last month, and will be showing up in stores in the coming months. You can find local retailers who are carrying it on their website here, and snag a six-ounce can for a suggested retail price of $3.99.