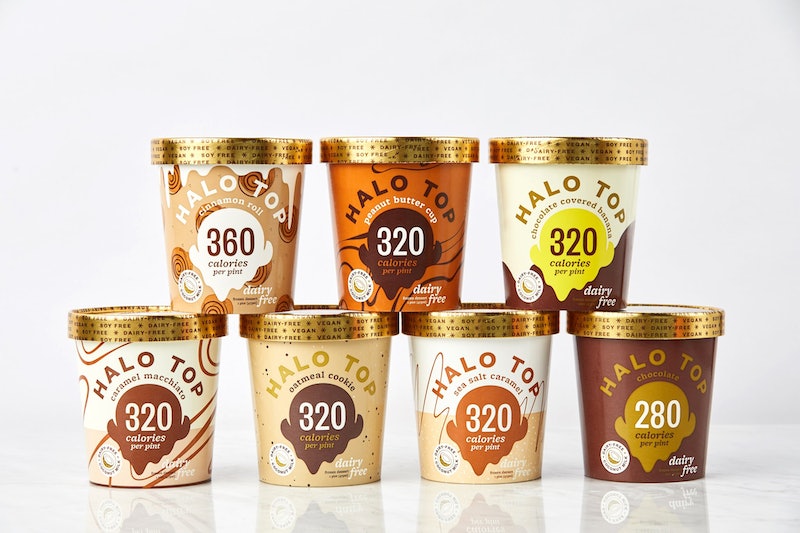 Even if you have no problem with consuming dairy, you're probably going to want to try out Halo Top's brand new vegan-friendly and dairy-free flavors, because they sound super delicious. Like, if you're not already a certifiable Halo Top addict, you're surely about to be. The mysteriously healthy ice cream that has a significant dose of protein is literally the number one ice cream in the country as of September 2017 — and if you've had it, you know why. It doesn't taste healthy at all.

It's got so much flavor, and each flavor tastes exactly like what it says it is. Like, it's actually impossible to fail a taste test, everything is just that spot-on. And I mean, not that I have any issue with eating a whole pint of regular ice cream otherwise, but it's nice to know that Halo Top pints come with protein so if I eat a whole pint of it on a regular basis, I'm not at risk of getting like, scurvy or something. Honestly, it's so flavorful and so creamy, I'm waiting for someone come out and say the whole thing was a hoax and it wasn't healthy, after all. Because how could it be? How could something so sweet, so ice-cream-like, and so fulfilling, be so, OK for you? I have yet to figure it out.

(Actually, if anyone has figured it out, let me know. I'm still convinced it's from outer space.)

And now, Halo Top is even more inclusive of their customer base. Because so many people who are vegan or lactose-intolerant have been left out of the Halo Top club — the company said Sept. 28 in a press release that dairy-free ice cream was the most highly requested product suggestion they've received to date — a change is coming. The people have spoken, they want their ice cream and their dairy-free lifestyle, too. So so they shall have it!

Dairy-free, vegan Halo Top! And the number one ice cream brand in the country didn't just make one boring dairy-free flavor to appease the masses: they made seven non-dairy versions of their most popular dairy flavors to make sure that everyone gets the same flavor treatment. And the new flavors aren't made with confusing chemicals — the milk is simply replaced with coconut milk, giving each flavor the same thick and rich taste.

Coming to a freezer section at a grocery store near you, we'll soon have dairy-free, vegan-friendly: Peanut Butter Cup (which tastes like a frozen Reese's Peanut Butter Cups) Chocolate (which is super rich), Oatmeal Cookie (which makes the lesser popular cookie taste first rate), Sea Salt Caramel (which is the perfect combination of salty and sweet), Caramel Macchiato (which literally tastes like something from Starbucks), Cinnamon Roll (which has actual pieces of cinnamon roll dough in it), and Chocolate Covered Banana (which has the strongest banana ice cream flavor you've probably ever had, it's like a banana split in every bite).

Excited? I know, me too.

But good things come to those who wait, which is exactly why we'll have to wait until mid-October, because the new flavors won't hit grocery stores until then. But if you're living that dairy-free lifestyle, you haven't ever had Halo Top before, so you don't even know what you're missing out on. So for you, it's just another day in the life. But for someone like me, who is not lactose intolerant but just generally doesn't feel all that great after eating a ton of dairy, I will have to wait as times slowly creeps forward.

Though I will say, the timing is pretty great, because now I can make that Halo Top ice cream cake for my Halloween party, and all of my guests can enjoy it equally.