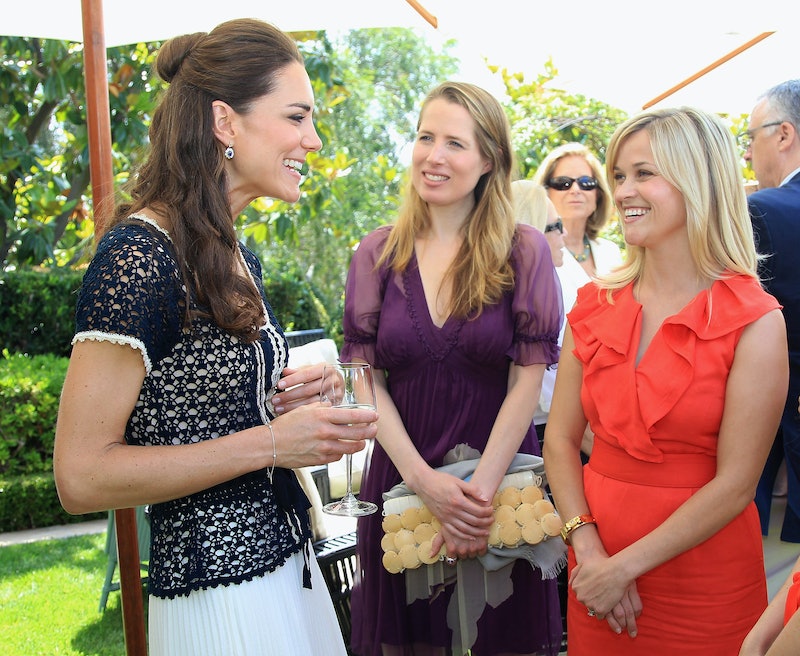 It's tough to fight the Royal fever, especially these days when the fascination with the famous family feels like it's at an all-time high. Even Reese Witherspoon met Kate Middleton and admitted she was starstruck, according to a Cosmpolitan article about Witherspoon's book Whisky in a Teacup. After years as a Hollywood actor, meeting tons of famous people in all arenas, it is pretty surprising that Witherspoon can even get starstruck these days, but it does happen. Then again, Kate Middleton is more than just a highly-talked-about person. She is a Royal Family member.

According to Cosmopolitan, Witherspoon claimed that she was "relatively immune from the obsession with the royals." Obviously that changed. She was invited to Prince William's Tusk Trust wildlife fundraiser in Los Angeles, California seven years ago and she just could not help losing her cool when she got the invitation.

"The scream that issued from my lips upon receiving [the invitation]—you would have thought I was going to die. I wake up early, mind you, but on that day I was up at 4am doing my hair. That's early, even for me. 'I've never seen you this excited,' my husband said. He wasn't kidding."

See, Reese Witherspoon is just like us! Well, not exactly, but if any "normal" person got invited to an event with the royals, they too would spend extra time getting ready for the big moment.

The fandom continued with the Academy Award winner admitting that she asked her husband to take photos of her on the way to the event. Again, this is another one of those "she's just like us" moments. When you're looking good for a major event, pictures are a must.

She even had the cutest description of the photos, writing, "You can see rays of happiness shooting out of my face. I love Kate Middleton that much." Doesn't everyone?

That is a lot of buildup, which is completely understandable, but how did the meeting go? As expected, the Royal not only met, but exceeded, Witherspoon's expectations. She revealed that Kate was "just lovely and warm, elegant and composed...I immediately fell under her spell. She's just as magnificent as she seems to be. She's a very compassionate, socially conscious, deeply caring person." As expected. She really is the world's princess.

During a 2012 episode of The Ellen DeGeneres Show, Witherspoon discussed the royal meeting. She told Ellen DeGeneres, "Somebody called me and said, 'We're having a really small fundraiser. Would you want to come over and meet the Prince and Princess?' I was like, 'Yes!'" This is how pretty much anyone would react. This is very relatable.

She added, "My husband just thought I was so dorky. He was like, 'Why are you so excited?'" Ok, so maybe almost anyone would react this way. There are actually a few people who are (somehow) immune to Royal fever.

During that same interview, the Legally Blonde star confessed, "I must of tried on like six outfits." Is six even a lot when you're meeting a princess? Not really. She explained, "I'm meeting a princess! You don't understand. You have to be wearing the right outfit and the whole thing." Exactly. That makes perfect sense.

Witherspoon also admitted that she would "like to hang out" with Middleton and added, "I'm not sure she wants to hang out with me." To be fair, she does have a very busy schedule full of royal obligations and three young children to look after. She probably does want to hang with Witherspoon, but it is doubtful that she has a lot of free time.

There haven't been any other sightings of the two women together since their meeting, but Marie Claire reports that Middleton might have sent Witherspoon a baby gift after she gave birth in 2012.

They missed an opportunity to hang again when Witherspoon attended a pre-BAFTA party at Kensington Palace in 2015. According to Hello! Magazine, Witherspoon shared, "My mother kept texting me, 'Did you meet the Queen? Was Kate there? No, Mum, I don't think they're coming to the BAFTA pre-party.'" And unfortunately they did not.

Maybe the next time she's at Middleton's "house," they will actually get to hang out with each other. Even if that does not end up happening, their initial meeting went so well and that is the perfect memory to save for the rest of her life. But then again, why not add another perfect memory to that list?