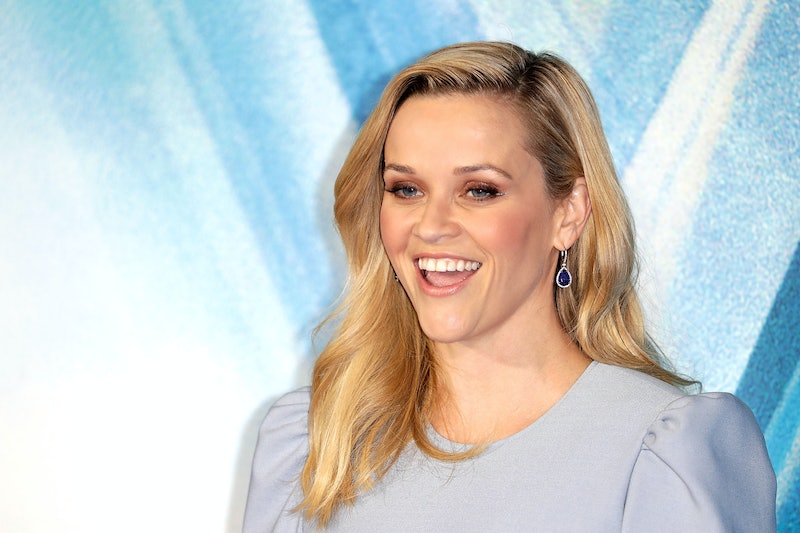 Getting a new puppy always sounds good in theory, but it's easy to forget that they come with their fair share of challenges. Puppies can wreak havoc on your household if you don't take time to train them properly, but man, they sure are cute, aren't they? Well, Reese Witherspoon's new puppy just ate her favorite sneaker, the star recently revealed on Instagram. Despite his naughty behavior, though, Witherspoon's famous friends still think he's a good boy, according to their comments on her post.

On June 25, Witherspoon first announced the arrival of her family's newest addition. "Welcome to the family, Lou!," she captioned a pic of the new pup on Instagram, followed by "#lovemybulldog."

Little Lou the bulldog is undeniably adorable. First of all, he's a puppy, and puppies, by nature, are undeniably adorable. Second of all, Lou has the *prettiest* crystal clear blue eyes. Couldn't you just get lost in those things? Seems like it'd be close to impossible to tell him "no," regardless of the mess he's making.

Perhaps that's why Lou has, apparently, been misbehaving a little bit lately. On July 30, Witherspoon posted another pic of her pup to Instagram, and yes, it's as cute — if not cuter — as the first photo she shared of him. Her caption, however, revealed that Lou had not been a very good boy.

"Pupdate," she wrote. "Today, Lou ate my favorite sneaker ... but just the left one," the actor confessed and added the shrugging emoji with "#LouTheBulldog." Uh oh, Lou. Why did you do that? Shoes aren't for eating! Shoes are for wearing, silly dog.

These kinds of things are bound to happen every now and then when you get a new dog. That's just the risk you take. Losing a favorite shoe definitely isn't easy, though, so you pretty much have to accept it in stride.

Now, Witherspoon probably wasn't thrilled when she discovered what Lou had done, but as far as her famous friends are concerned, everything is already forgiven. "Impossible to be mad at that face though," Mindy Kaling wrote. "That dog is seriously beautiful," Natalie Portman added. "That neck," Brooklyn Decker commented, followed by two heart-eyes emojis.

The adoring celebrity responses to Witherspoon's post about Lou didn't end there. "I mean, no one is cuter," Jennifer Garner admitted. "But not the sneakers, Lou. Never the sneakers." Fair enough.

"That dog isn't real," January Jones joked. "'Where's the beef?'" Kristin Chenowith wrote, referring to the catchphrase from the famed 1984 Wendy's commercial. "That's the face." Honestly, she's not wrong. In fact, all of the celebrities that commented on Witherspoon's post made decidedly valid points.

Sure, sneakers are great — but puppies, well, puppies are better. Sneakers can only add a finite amount of joy to your life. They won't love you unconditionally and worship the ground you walk on. They won't greet you excitedly at the door when you get home, and they won't snuggle with you at night. Witherspoon can easily get another pair of her favorite sneakers, but Lou is definitely one of a kind.

More like this
What Is Reese Witherspoon’s Net Worth? The Emmy Nominee Makes 7 Figures Per 'Morning Show' Episode
By Meg Walters
Florence Pugh Reflected On Her ‘Don’t Worry Darling’ Experience On Opening Day
By Brad Witter
Adam Devine Hilariously Let Everyone Know He’s *Not* Accused Cheater Adam Levine
By Brad Witter
Devi Is Going To Meet A “Smoldering Bad Boy” In ‘Never Have I Ever’ Season 4
By Jack Irvin and Gabrielle Bondi
Get Even More From Bustle — Sign Up For The Newsletter