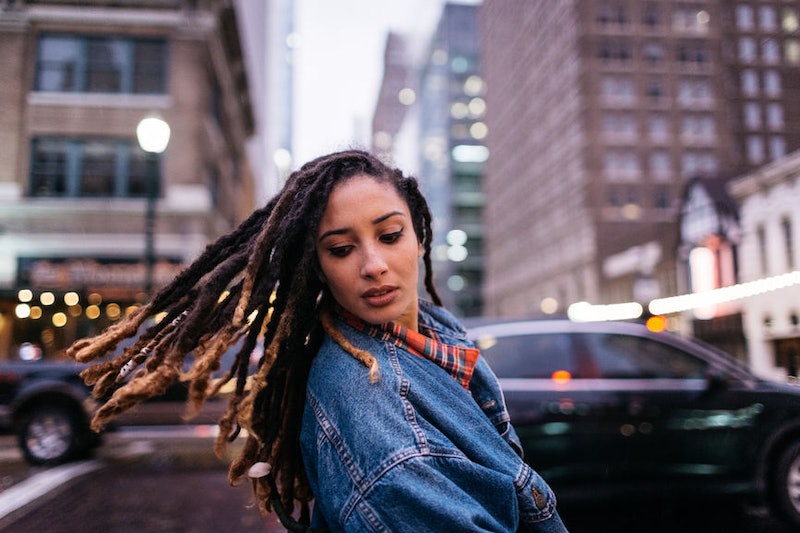 If you're a woman, walking down the street is a political act. Think about it. With catcalling, body-shaming, and the very real threats to women's safety we face every day, it's not easy. It's like simply going out of the house and just existing the way you really want to is to laugh in the face of sexism. In my opinion, pounding the pavement can actually be an example of feminism, and this is why I'm no longer moving out of men's way whenever they walk towards me. Let me explain.

I recently noticed that when I'm out and about, a lot of men I encounter expect me to make way for them when we cross paths on the pavement. Now, I'd like to think I'm a pretty polite pavement-user. I pay careful attention to etiquette, give way to prams, pregnant women, and the elderly, drop into single file when I'm walking with friends and someone needs to get past, and always stay to the side so speedier walkers have space to overtake me. But as a result of my conscientiousness, I realised that I was moving out of the way of almost all the men I encountered, sometimes hopping straight off the pavement to avoid a collision, and all the while, they weren't budging an inch.

It didn't take me long to get seriously cross about it. Pavement-hogging is essentially a more mobile form of manspreading, the phenomenon where men take up far more space than is necessary on public transport, in offices, in cinemas, and basically anywhere they can sit and unfurl their limbs. It's men taking up more space than they require and expecting women to minimise themselves so they can do so. Now don't get me wrong, I don't think everyone should move out of the way for me, either, but I truly found that almost all of the men I was dodging were forcing me to do so because they weren't prepared to budge an inch. Men aren't trains on tracks. They can change direction. So why was I leaping out of the way as though they were racing toward me at the speed of HS2?

It's true that microagressions like mansplaining, manspreading, and pavement-hogging aren't the frontline of the feminist fight, but I find it difficult to disassociate the entitlement and privilege that makes men willing to shoulder charge me rather than move a few centimetres to the side, with the entitlement and privilege that enable men to ask for pay rises and receive them with ease, and that sees them glide up the ranks of big business.

So, I decided to take a literal stand. When I see a man coming toward me with a steely glint in his eye that says, "get out of my way," I simply don't. I carry on walking, as if I were the train on tracks, and accept the resulting collision with a grim smile. It may not be revolutionary, but I have just as much right to a slice of pavement as any man, and I will not be giving it up without a fight.

My height (5 feet, 11 inches/180 centimetres) helps with this, as I'm well above the average height for women and men (lol) and my large frame makes it easier to withstand the aftershocks of any roadside argybargy.

But I'd like to suggest that if you're a woman of any size or stature and feel safe to do so, reclaim your pavement. Don't make way for men. Yes, a few bumps and bashes are likely to ensue, but it's a small price to pay for reclaiming your right to the road, sticking up for your right to take up space, and stamping on suggestions that you are in any way less important than a man. Well worth it, I'd say.

More like this
Iran Has Issued A Death Sentence Over Mahsa Amini Protests
By Catharina Cheung, Darshita Goyal and Maxine Harrison
MOBO Awards Found Kanya King On The Woman Whose Grit & Determination Spur Her On
By Kanya King
Amanda Gorman Shared A Powerful Message On Meghan Markle’s Penultimate Podcast
By Darshita Goyal
Wimbledon Alters All-White Kit Rule Amid Candid Period Discussions
By Catharina Cheung and Rachel Mantock
Get The Very Best Of Bustle/UK