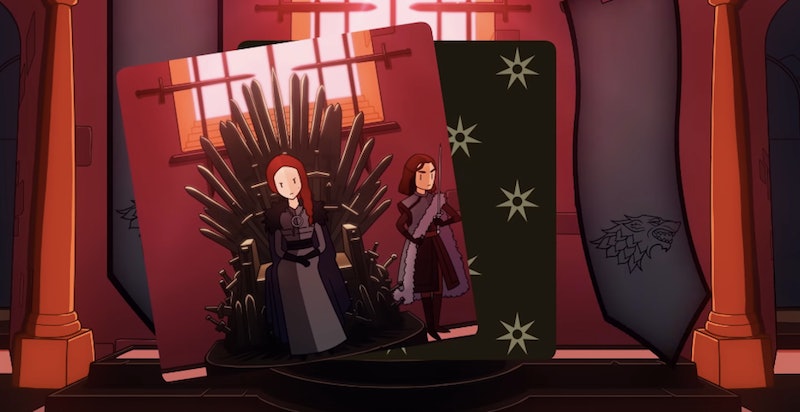 The night is dark and full of terrors, especially with no new Game of Thrones episodes on the horizon until sometime in 2019. There is a little hope, though! The Reigns: Game of Thrones trailer shows the Tinder-inspired GoT game app that's just enough to help fans make it to Season 8.

It's not an entirely new game, as the Reigns: Game of Thrones app is a spinoff of the existing game Reigns. Still, it's pretty cool. Described by TIME as a "Tinder-inspired strategy game," Reigns: Game of Thrones essentially functions as a choose-your-own-adventure set in Westeros. TIME reports that users play by choosing a popular character to rule from the Iron Throne, and then swiping left or right to pick their next move. Each move the player makes as their character presents them with two new options, each of which will help "determine their fate" as the official ruler of the Seven Kingdoms. As TIME helpfully points out, this edition of Reigns is not limited by specific events in the HBO series. In fact, players can delve into their preferred "alternate GoT timelines" as a method of play — including ones wherein Sansa Stark of Winterfell ends up marrying, uh, Ser Jaime Lannister. If they're into that kind of thing.

The actual game play does look similar to swiping-based dating apps, except with more options: Instead of a Yes or No answer, users are prompted with two distinct paths to take. As shown in the trailer, one option might be an action, while the other continues a dialogue with another character. Players will be able to continue making decisions as their chosen king or queen until — well, as the saying goes, when you play the "Game of Thrones", you win or you die. So users will definitely want to think twice before going the whole Mad Queen route and blowing up everyone else in the game.

According to TIme, it looks as if the game will strictly be available for iPhone and Android, with an additional version available for download via desktop streaming game site Steam. While it doesn't seem as advanced or involved as many of the other popular video games today, it does present fans of Game of Thrones with a unique opportunity to control the outcome of their favorite TV show. Yes, it does look as if the character selection is limited, and not just by popularity; they have to be alive and viewed as a viable contender for the Iron Throne. But with so much time left until the Game of Thrones Season 8 premiere, fans can't exactly complain about not having enough to play in the new gaming app.

In fact, the best part about the game is that it's so simple to play. The design is clean, the gameplay is intuitive, and it's engineered to appeal to Game of Thrones fans in general — not just expert gamers. An app like Reigns: Game of Thrones casts the widest possible net with its easy charm, meaning it could reel in dozens of HBO fans that might not purchase a game under other circumstances. Add the best part: the game is reportedly set for release in October, so GoT fans will have plenty of time to play while they wait for Season 8.