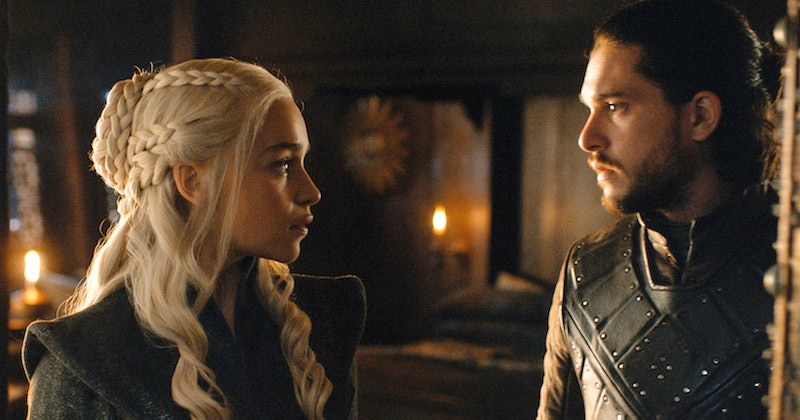 Sit down, there is a new Game Of Thrones theory and guess what, this one might have you in actual floods of tears. Real Talk. And where do fan theories do their best work? Why, Reddit of course. Yes yes yes, akin to over analysing a text from a toxic love interest, Reddit is the perfect place to go into overdrive with your bonkers theories and the even more bonkers theories of others. However this one will have you wondering, will Daenerys Targaryen and Jon Snow get married? The theorised answer is neither what you might expect, and also like really sad. That's not like GoT to throw a spanner in the works and completely break your heart is it? Oh no wait...

So the suggested theory is basically that Daenerys will sack off Jon Snow in favour of another close person. Yes, that is sad but also like, marrying your nephew is defs not OK and it would be great if she could not do that thanks. I guess you could think like, yeah that is a possibility but how in the heck are you so certain? Well, this is why the internet was invented — for other people to do all the bonkers over-thinking so you don't have to.

OK, now bear with me, we are in for a bumpy ride. So our pal, Reddit user Kolegus has come up with the idea that nope, Daenerys and Jon Snow will not be putting a ring on it, but in fact Jorah will be marrying the blonde queen of dragons. Say what? Yes, Jorah. That kind of creepy older guy who has known her for her whole life and is hell in love with her. Problematic doesn't even begin to describe that whole situation, but as we have seen before, GoT DGAF about being PC, am I right?

Anyhow, the theory put forward by Kolegus is that Daenerys and Jon Snow will get preggers and that Jon will be eager to do the honourable thing. He won't want his child to deal with the stigma of being a "bastard" (this show is actually so effed up). That all sounds legit right? Well, maybe not. Basically, Tyrion Lannister is fully going to eff this situation up. WTF Tyrion I thought you were a goodie now?!

"I think Tyrion will talk Jon and Daenerys out of marrying each other and say how the North won't accept Jon being a Targ and/or marrying a Targ. I think Sansa will also push the North against it too. And they may even call Sansa Lord/Queen of Winterfell in his place."

But why why why Tyrion? This is all relating to family loyalty and things having changed after Tyrion found out Cersei is supposedly pregnant. He realises that his loyalties lie with this new baby and his family name.

"Tyrion has made an uncertain choice that he is in fact a Lannister and all those scenes last season of him feeling guilty and hurt for his armies being slain all add to this. He loves his family. He loves his house. And I think that's the core of his nature. I believe he wants the Lannisters to have the Iron Throne."

Wow nice one Tyrion. Anyway, looks like even further to this, he will persuade Daenerys to marry Jorah, the older creepy guy. Yep, and for them to pretend that Jorah is the baby daddy. The Reddit user points out that this betrayal has been forewarned because in the books Daenerys is warned not to trust a lion.

"I don't know how he's betrayed her exactly but I believe he has, especially since Dany in the books is warned not to trust the lion"

This will mess absolutely everything up, separating the strongest opposition to the throne and making the Lannisters more powerful.

"...the war will come against the army of the dead and Dany will have her child at the beginning of it... Daenerys will be in so much pain and anguish after her child she'll tell Jorah to kill her...Later in the battle Jorah will kill the Night King but die in the doing of it. (Ending the war)"

The theory finishes up with basically Jon heading off to war, Daenerys dying and the poor little baby maybe becoming the leader of the seven kingdoms. Or the Lannister baby. Or who even actually knows but I cannot get enough of this stuff.

"In the final Jamie [sic] would have killed Cersei and someone else would be on the throne.. Possibly Tyrion? Maybe even Jon and Dany's child. But if not Jon will raise his child in winterfell [sic] and the kid will grow up never knowing his mother like Jon never knew his when the series started."

What the actual flipping flip. That theory is so net level deep and interesting. The only thing that could possibly be any more deep and interesting is whatever crazy exciting stuff they come up with in the final season. The countdown is still on. Cannot bloomin' wait.