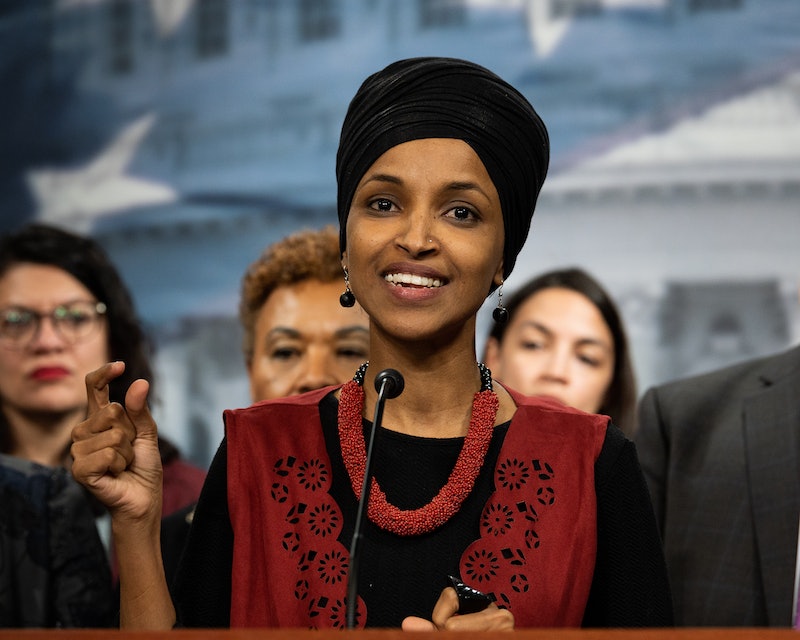 Politicians and people on social media came out in support of Rep. Ilhan Omar after she spoke about living with PTSD — to which a Republican congressman responded, calling her a “disgrace” on Twitter. Rep. Jim Banks of Indiana tweeted on Jan. 8 that Omar’s comments about her post-traumatic stress disorder were “offensive” to veterans “who really do have PTSD.” Omar, who came to the U.S. as a refugee of the Somalian civil war, mentioned her experience with PTSD while delivering a statement against the escalation of conflict with Iran. “Every time I hear of conversations around war, I find myself being stricken with PTSD,” Omar said in the statement.

Omar and her family fled Somalia during the country’s violent civil war when she was 8 years old, and she’s the first refugee of war elected to Congress. Omar was quick to shut down Banks’ remarks, writing, “I survived war as a child and deal with post-traumatic stress disorder — much like many who have served or lived through war,” Omar said, adding that it was “shameful” to “erase the PTSD of survivors.”

Other members of Congress and veterans wrote messages of support for Omar on Twitter. Rep. Ayanna Pressley quickly told Ingraham to “take a seat.” Author and veteran Jason Kander wrote, “Rep. Banks, you and I spent a few months in Afghanistan. Rep. Omar grew up in war-torn Somalia before spending years in a Kenyan refugee camp on the Somali border. It’s not up to us to decide who is and is not ‘worthy’ of PTSD. Trauma is trauma. A uniform is not required.”

PTSD is a condition where a traumatic event of any kind, either experienced or witnessed, causes long-term mental health issues. Dr. Shainna Ali, licensed mental health counselor, educator, and clinical supervisor, told Bustle in 2018 that trauma is subjective, and a traumatic experience for one person may not be so for another. PTSD also has long-term effects on a person's brain.

"Severe and chronic post traumatic stress disorder has been found to change not only the function but the structure of the brain over time," Dr. Sean Clouston, associate professor of public health at the Department of Family, Population and Preventative Medicine at Stony Brook Medicine and a PTSD researcher, told Bustle in 2019.

According to the Mayo Clinic, the most common types of events that can increase someone’s risk of developing PTSD include combat exposure, childhood physical abuse, sexual violence, assault, being threatened with a weapon, and accidents. While veterans do face elevated risk of PTSD, with between 11% and 20% of veterans of recent wars being diagnosed, researchers at Harvard found that almost 50% of PTSD cases in the United States are caused by sexual or physical violence. Nearly a third of cases stem from sexual abuse alone.

PTSD is not uncommon in refugees, particularly Somali refugees in Minnesota, where Omar and her family settled in the late 1990s. A 2009 University of Minnesota Medical School study found that “the majority of Somali female patients [tested] show predominantly depressive and PTSD symptomatology.”

More like this
Eurovision Has Been Given A Whole New Look Ahead Of Its Liverpool Debut
By Bustle UK
6 Organizations Fighting Police Brutality That You Can Support Right Now
By Syeda Khaula Saad and JR Thorpe
10 Primal Movement Exercises That'll Improve Your Mobility
By Carolyn Steber
Here’s What Health Means To People In 2023
By Isabella Biedenharn
Get Even More From Bustle — Sign Up For The Newsletter
From hair trends to relationship advice, our daily newsletter has everything you need to sound like a person who’s on TikTok, even if you aren’t.