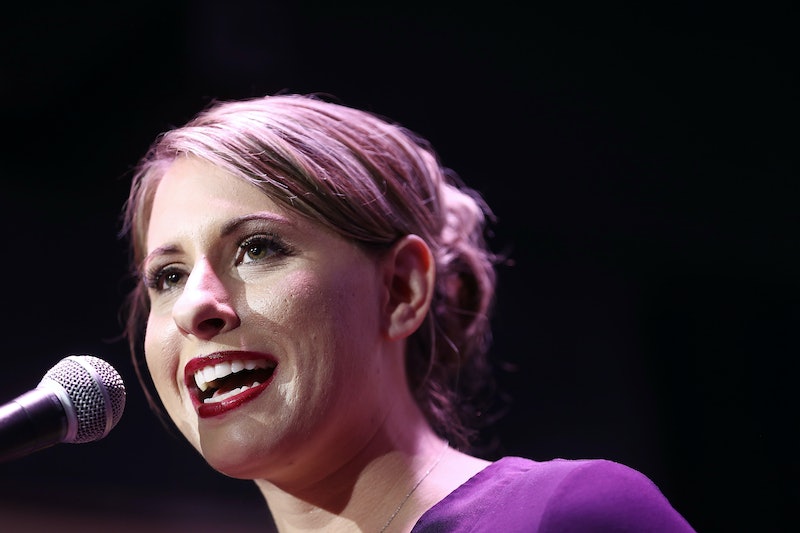 Inappropriate behavior still seems to be an issue on Capitol Hill. In a rather candid interview, California Democratic Rep. Katie Hill talked about sexism in the House of Representatives with The Lily, among other topics, and recounted an unpleasant encounter with a male colleague. "It's very archaic," Hill told the publication. "The other day, I had a member who said something that was just so dumb. He said it as a joke, but it was a sexual comment. And I was just like, 'You can’t say those kinds of things anymore.'"

According to Hill, the unnamed representative made a lewd comment when she discussed one-minute speeches on the House floor. "I called him 'Mr. One Minute' or 'One Minute Man,' or something. I didn’t even think about it that way, but he was like, 'I can also be Mr. Five Minute Man or Mr. Whatever Minute Man You Want,'" Hill told The Lily.

"It was in front of people," the 31-year-old Democrat added, "and the rest of us were all looking at each other. One of my young colleagues said, 'Well, that took a turn.'"

It's not the first time someone has highlighted this sort of unprofessional conduct on Capitol Hill. In 2017, The Atlantic reported that California Democratic congresswoman Jackie Speier was stunned by the pervasive nature of sexual harassment in the capital. "Some of these members," Speier said, per The Atlantic, "they're so blatant about it! You can't imagine."

In a separate report also published in 2017, The Atlantic pointed to a whole "taxonomy" of sexual predators and harassers on Capitol Hill. The magazine also noted that female interns and aides working in the capital quickly begin to learn to spot such men — and avoid them.

Even before her interview with The Lily, Hill garnered a reputation for being blunt about her convictions. In June, NBC News noted Hill's openness about her own identity as a bisexual woman and how she said that she planned to protect LGBTQ rights as a congresswoman.

On her campaign website, Hill stated, "I’ve identified as bisexual since I was a teenager, and if we want to achieve equality for all in our policies, we need more voices from the LGBTQ community in Congress."

"The federal government has no business in restricting basic human rights based on sexual orientation, and I am ready to protect equality at every turn in Congress," she added back then.

In addition to talking about the remarkably unprofessional behavior of some of her male colleagues, Hill told The Lily about an environment of care and regard among female lawmakers on Capitol Hill.

"I don’t think it’s just the freshman," the California Democrat told the outlet. "It’s a culture we came into. You can tell female members have been supporting each other in a huge way for a long time. There is this one particular group of women, who are all friends, who were instrumental in getting [many of the new congresswomen] elected — Lois Frankel, Katherine Clark, Cheri Bustos."

Hill went on to add: "During the campaign, they would text us, 'Just checking in.'"