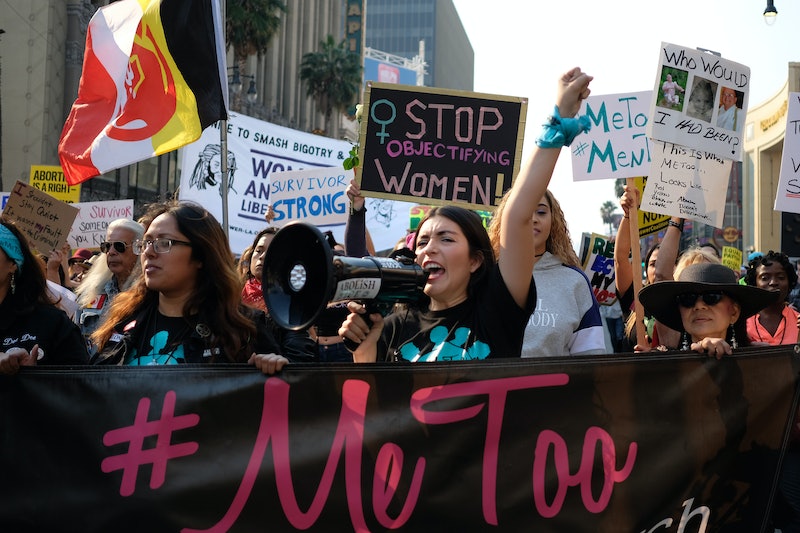 Generally, seeing numbers of a certain crime go up is an alarming sign of a growing problem. More murders in a city is never a good thing, for example. In this day and age, however, there's an exception to that rule. Numbers of rape reports are rising in New York City — and officials actually think that those numbers are evidence of a positive change.

The New York City Police Department reported in the first week of January that reports of rape had gone up by 22 percent in 2018, as WTNH News 8 wrote. New York Mayor Bill de Blasio didn't react to this negatively in a press conference on crime statistics, though, because city officials see it as a reflection of the success of the #MeToo movement.

“Historic underreporting is finally being addressed," de Blasio said at the press conference, according to The New York Times. And according to a study by the Department of Justice, this phenomenon isn't just showing up in New York City — rape reports are going up all over the country.

“I think the #MeToo movement is a part of it, and a number of other things. Messages are being sent by government," de Blasio told reporters, as the Times reported. "Messages are being sent by media, by advocates, helping victims — survivors — to know that they should come forward, that it’s important, that they’ll be protected, they’ll be supported.”

In total, 2018 saw 1,795 reports of rape in New York City, as CNN reported, which means 328 more reports than in 2017. Not all of these reports referred to incidents that took place in 2018, as CNN wrote, and they came after the New York City Police launched a campaign in April of 2018 encouraging people to report the sexual assaults that they experienced.

“It means we’re building trust,” said Deputy Chief Lori Pollock, according to The New York Times. “The message is we want the reports. We want to hear from you. We want to investigate these crimes.”

Even earlier in the year, crisis centers started to notice that more people were calling in to report incidents of various kinds of sexual misbehavior, as The Philadelphia Inquirer reported in September.

The rise in reports started happening around the time when Dr. Christine Blasey Ford testified to the Senate about her allegations of attempted sexual assault against then Judge Brett Kavanaugh (which Kavanaugh denied). According to The New York Times, the increased reporting hasn't stopped since then, which advocates believe is a reflection of people feeling more comfortable reporting after seeing women talk about their experiences so publicly.

Rape and sexual misconduct are so underreported in general that a 22 percent increase in reports doesn't mean that the problem is solved, but it's definitely a step in the right direction. After all, women have many reasons not to report rape, and one of those is that survivors don't always trust the police to act in their interest. For rape culture to truly change, survivors have to feel that they — and their stories — will be given the respect that they deserve. With that in mind, a 22 percent increase in reports in just one year actually is a significant success story.