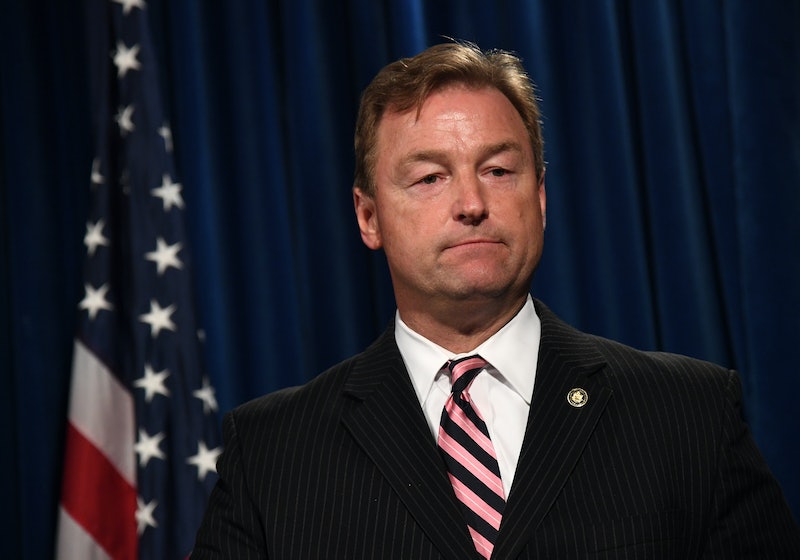 Nevada Sen. Dean Heller has often been a critic of Donald Trump. He disagreed with the president's pardoning former Arizona sheriff Joe Arpaio, argued that DACA protections should stay in place, and waffled back on forth on Trump's plan to repeal and replace Obamacare. However, on a Wednesday evening teleconference with his constituents, Heller used Bill Clinton to defend Trump's racism, sidestepping the question entirely.

During the call, ThinkProgress reported, one of Heller's constituents asked him how he could "justify standing behind a president" who described other countries as "sh*tholes," made disparaging remarks against women, and dismissed "some of the most respected news agencies" as "fake news and losers." Rather than actually justifying himself, however, Heller was quick to focus on Bill Clinton and other "Democratic presidents that had similar problems." He said:

Well, I will tell you, Lynn, you probably stood behind some of the Democratic presidents that had similar problems. And I certainly don’t excuse any of these activities and these actions, but I certainly had to have conversations with my daughters when Bill Clinton was doing his activities in the White House also. So, there’s no purity test here.

It's worth noting that Heller assumes his constituent is a Democrat — or at least, someone who has supported Democrats — despite the fact that there is no indication or confirmation of this.

When Heller says "I certainly had to have conversations with my daughters when Bill Clinton was doing his activities in the White House also," he's clearly referring to Clinton's affair with Monica Lewinsky, who was a White House intern while Clinton was president.

But Heller is trying to make Democratic presidents seem just as bad as Trump because he is unable to actually justify supporting him — he only recently admitted to voting for him in the presidential election. There's no point in contesting that Democrats have had their own fair share of controversial behavior, but Heller tried to use it as justification for Trump's behavior.

Heller's claim that he will support some of the president's policies if he agrees with them is fraught with complications, given the tense nature of Heller's relationship with Trump. Last summer, Trump threatened Heller — who is considered extremely vulnerable as he approaches his reelection bid — on the issue of health care when Heller was sitting right next to him. And Heller seemed to understand that Trump wasn't joking, because following this interaction, Heller appeared to reverse his position on the GOP health care bill.

And yet, despite these tensions, the teleconference was not the first time that Heller seemed to inadvertently defend Trump. In December, according to the Washington Post, a Las Vegas resident named Laura Packard was asked to leave a town hall meeting with Heller after asking him why he would support legislation that would take away health care coverage from people like her. Packard was insured through the Affordable Care Act, and has stage 4 Hodgkin’s lymphoma.

Carson City native Bailey Bortolin posted an audio recording of the phone call to Twitter, and ThinkProgress reported that it had confirmed the recording's authenticity. Megan Taylor, Heller's communications director, also appeared to confirm that the recording was authentic in a tweeted reply to Bartolin.