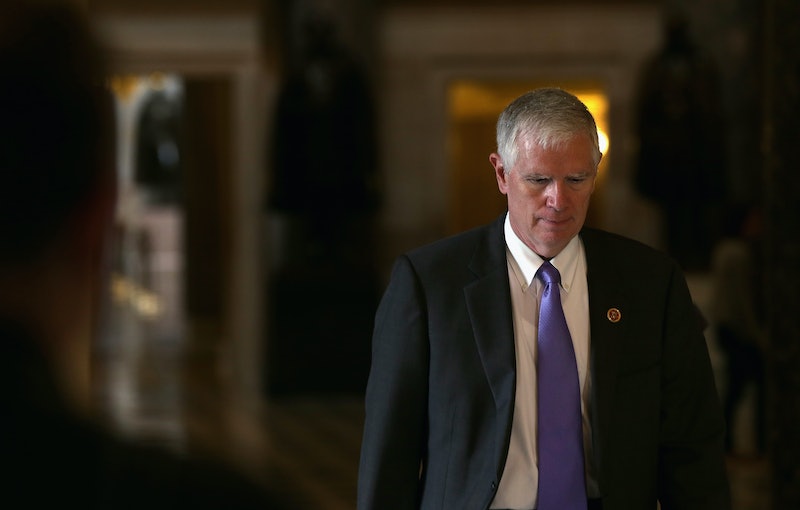 For Republican lawmakers in Congress, 2018 appears to be the year for retirement. In fact, A record number of them have announced they've no plans to seek re-election in 2018. But what exactly is it that's causing Republicans in Congress to head for the door in droves? Alabama Rep. Mo Brooks thinks it's the risk of assassination that's causing Republican lawmakers to retire in such high numbers.

In an radio interview on The Dale Jackson Show, Brooks suggested his Republican colleagues may be opting to retire out of a fear of violence and even assassination following the Congressional baseball shooting in 2017 that left House majority whip Steve Scalise injured. "One of the things that's concerning me is the assassination risk may become a factor," Roll Call was the first to report Brooks said in the interview. "You have to wonder with that kind of disproportionate retirement number whether what happened in June played a factor."

According to Roll Call, 22 members of the House of Representatives retire each year, on average. This year, however, a record number of Republican lawmakers in Congress have announced plans to retire, a number of whom play on the Republican congressional baseball team. In all, more than 35 Republicans will retire from the House and Senate this year, according to a count by Fox News.

To illustrate his point, the Alabama representative pointed out that a number of Republican lawmakers who play on the party's congressional baseball team are retiring. These include Reps. Joe Barton, Ryan Costello, Ron DeSantis, Pat Meehan, Steve Pearce, Tom Rooney, and Dennis Ross as well as Sen. Jeff Flake.

"I don't think any of these people who are retiring would say that, but just looking at the numbers," Brooks went on to say in the interview. "That's out of whack."

According to Roll Call, Brooks also cited recent threats received by at least four representatives. A man who made death threats against Arizona Rep. Martha McSally was sentenced to prison earlier this month, while another man was arrested in March for allegedly threatening to kill Rep. Scott Taylor. Reps. Tom Garrett and Frank LoBiondo, who plans to retire in 2018, have also reportedly received threats.

"Notice a trend here?" Roll Call reported Brooks said in his interview with The Dale Jackson Show. "I have a congressman who is a friend here who has a three-year old daughter whose daughter was threatened with murder."

The Alabama congressman then reportedly went on to claim "leftists" might be behind the increased risk of violence. "There are a growing number of leftists who believe the way to resolve this is not at the ballot box but through threats and sometimes through violence and assassinations," Roll Call reported Brooks said.

It's worth noting, however, that some GOP lawmakers announced their plan to retire amid allegations or scandals. Barton, for example, announced his retirement after a nude photo he'd sent to someone was made public. Reps. Blake Farenthold, Trent Franks, and Meehan all resigned amid allegations of sexual misconduct. Other retiring Republican lawmakers, including Sen. Thad Cochran, have cited poor health as the reason behind their retirement. Others, like Flake and Costello, have cited a frustrating political environment due to clashes with other Republican Party members or President Donald Trump as their reason for retiring.

"Whether it's Stormy Daniels or passing an omnibus spending bill that the president threatens to veto after promising to sign, it's very difficult to move forward in a constructive way today," Costello told the Delaware County Daily Times about his reason for not seeking re-election in the 2018 midterms.