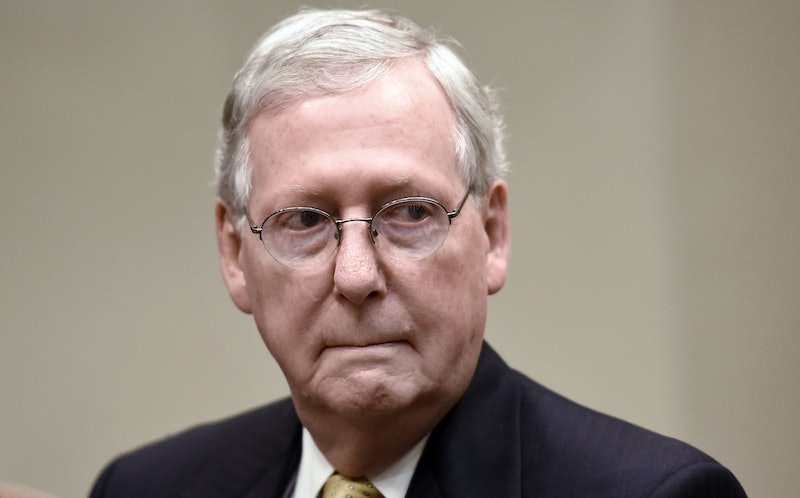 Republican senators leading the push to pass the American Health Care Act (AHCA) are facing backlash from lawmakers on both sides of the aisle. Sens. Chuck Schumer and John McCain alike have criticized some GOP senators for handling the AHCA the same way, if not worse than they claim Democrats did in 2010, when they were criticized for rushing through Obamacare.

Senate Majority Leader Mitch McConnell will reportedly only hold a vote on the bill before the 4th of July recess. The AHCA — or Trumpcare, as it's known — has only been in existence in the form of its House counterpart for a few months. Yet Republicans have not made the details of the bill available to their Democratic counterparts, let alone the public.

McConnell also declined to assure Senate Minority Leader Chuck Schumer that the Democrats would have at least ten hours to review the bill before a vote is called, simply saying that there would be "ample" time to review it, but not putting an actual estimate to it.

And according to reports, the criticism is coming from inside the Republican party, too. Sen. John McCain reportedly railed against his fellow GOP-ers, suggesting to reporters that they were "acting hypocritical," according to CNN's Manu Raju. It's unclear whether that will affect his eventual vote.

If it sounds strange that the GOP would now be pushing for a hasty vote on a huge overhaul of the American health care system disfavored by an overwhelming majority of Americans, there's a reason for that. What McConnell is doing now is in stark contrast to the line he took during the Affordable Care Act's legislative process seven years ago when he and his party regularly condemned Democrats for trying to "jam [Obamacare] down our throats."

In a Feb. 2010 interview on Fox News, McConnell criticized Democrats for doing over the course of more than a year of open debate what the GOP is now trying to do in a few months of hurried secrecy:

I think the fundamental point I want to make is the arrogance of all of this. You know, they are saying, "Ignore the wishes of the American people. We know more about this than you do. And we're going to jam it down your throats no matter what." That is why the public is so angry at this Congress and this administration over this issue.

In 2010, Republicans like Texas senator John Cornyn slammed the "secret negotiations" in the discussion about Obamacare. Except in that case, the behind-the-scenes deal-making was ultimately hashed out and debated on the floor of the Senate, in full view of the American public. By the time Obamacare passed the Senate, it had been a subject of ferocious, extended congressional debate for more than a year, with the entire bill available to the public for months.

When McConnell cited of the "arrogance" of Democrats advancing a bill that ignored the wishes of the American public, he was talking about a bill that a narrow plurality of the country disapproved of, by a margin of 48 percent to 45 percent ― just three points underwater, in other words.

A Quinnipiac poll in May, on the other hand, found that just 21 percent of the public supports the AHCA, while 56 percent disapprove. In other words, that's a 35-point margin of disapproval, slightly more than ten times the margin McConnell found prohibitive all those years ago.

Now, the plan seems to be a quick-strike with the expectation less than one day's worth of public debate of an overhaul of the entire American health care system.

But how the GOP is handling the AHCA process is bizarre, considering their positions on how Democrats carried out discussions on Obamacare in 2010. The health care legislation could have an enormous impact on the industry. And if the Congressional Budget Office's estimate is any indication — 23 million Americans could lose their health insurance if the House's version of the bill stands — the Senate's secrecy and haste in pushing through the AHCA has raised plenty of alarm.