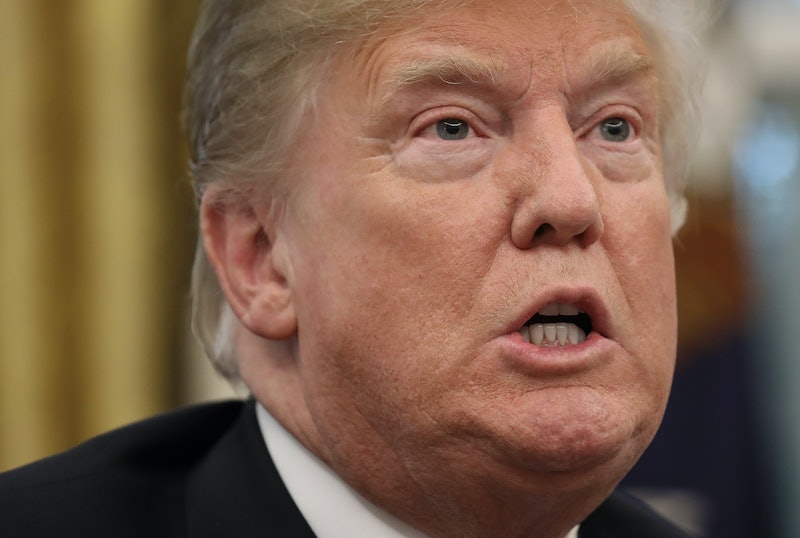 Republicans are so worried about the November midterm election that they reportedly held a meeting about it at the White House — even though the main factor, pollsters argued, is the president himself. This secret White House midterms meeting Republicans had doesn't bode well for the GOP.

The party is trying to hold onto control of Congress, and it's looking less and less likely according to polling. Even the Senate may be up for grabs, even though the Republicans have a much better map — fewer of their Senate seats are up for grabs.

The Associated Press reported that a top Republican pollster, Neil Newhouse, gave a presentation at a private meeting at the White House in early September. The news agency received a copy of Newhouse's report, which showed, among other things, that Trump's numbers were affecting the midterm races, even more than other factors like the economy.

Trump's current numbers are not good, even among some Republicans who will need to vote in the midterms if the GOP were to win, one conservative pollster told the AP.

“For Republican candidates to win in swing states, they need all of the voters who support President Trump, plus a chunk of those who do not,” Whit Ayres, the GOP pollster, told the news agency. “That is threading a very narrow strategic needle.”

Officials also hold meetings for Trump to update him on polling numbers that point to Democratic wins, the AP reported. But whether or not he believes them is another story. He reportedly often gives more credence to outside advisers who predict more of a Republican wave, as Trump himself argues on Twitter or at campaigns.

Trump, for example, tweeted on Saturday about his poll numbers but brought up the Mueller investigation, a rough point for moderate Republicans:

While my (our) poll numbers are good, with the Economy being the best ever, if it weren’t for the Rigged Russian Witch Hunt, they would be 25 points higher! Highly conflicted Bob Mueller & the 17 Angry Democrats are using this Phony issue to hurt us in the Midterms. No Collusion!

That's not what the pollsters said to do at the private meeting, the AP reported. Newhouse, and other political strategists like Karl Rove, pushed to focus on Democrats and their policies, like those who are advocating for the abolishment of Immigrations and Customs Enforcement, or ICE, and having the government pay for health care. Rove said that's a "toxic mix to the soft Republicans and Republican-leaning independents."

The need to counteract Trump's numbers has been acknowledged at other closed-doors meetings this fall. Mick Mulvaney, the federal budget director, tried to explain the situation to GOP donors and officials in New York City, also in early September.

"You may hate the president, and there’s a lot of people who do, but they certainly like the way the country is going,” Mr. Mulvaney said, according to The New York Times, adding that knowledge is key to winning over some voters. “If you figure out a way to subtract from that equation how they feel about the president, the numbers go up dramatically."

The meetings may be secret, but the truth is out about Trump's numbers and their role in the November midterms.