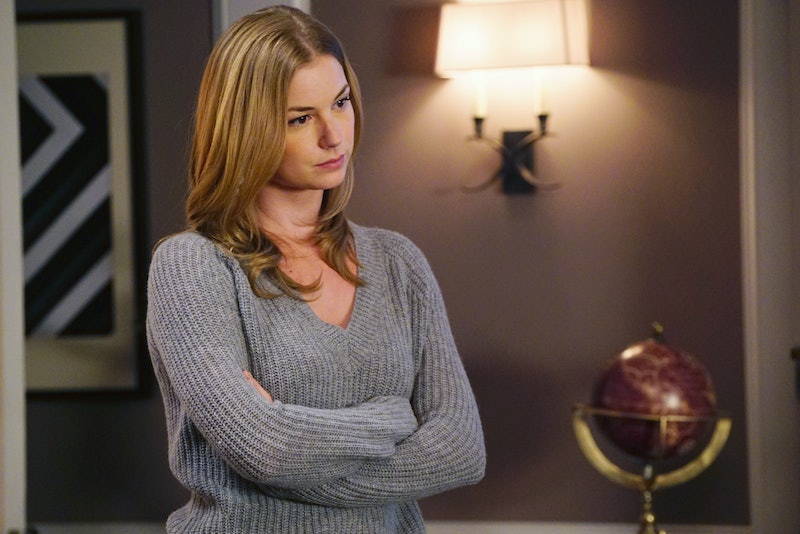 Grab your favorite red sharpie and a glass of something sparkling, because a Revenge revival is in the works at ABC. Deadline first reported the news on Wednesday, revealing that the pseudo-reboot is currently in the "early stages" of development. According to the website, this Revenge 2.0 will have the same basic premise as the original, but with a brand new storyline — and a Latinx lead.

The original drama first premiered in 2011 and starred Emily VanCamp as Emily Thorne/Amanda Clarke and Madeleine Stowe as Victoria Grayson. Creator Mike Kelly and writer-producer Joe Fazzio are both set to return for the revival. And, according to Deadline, so will a familiar character, who will connect this new story to the original.

The new Revenge will follow a young Latnix immigrant, who Deadline teased would be will be "guided by one of the original series' favorite characters." Unlike the Hamptons, the reboot will take place in Malibu, in which the lead will — à la Emily Thorne — "exact revenge on a Sackler-esque pharmaceutical dynasty, whose insatiable greed lead to the murder of her biochemist mother, the destruction of her family, and a global epidemic."

As for the original character returning, that's being kept under wraps for now. That said, there are a few characters that come to mind. Gabriel Mann's Nolan Ross could definitely return. Nolan was Emily's closest confidante, who was also a billionaire tech wiz. And seeing as Nolan never got his spinoff, this would be the perfect opportunity for Mann to reprise his role.

If Mann doesn't return as Ross, other fans have expressed interest in the comeback of Elena Satine's Louise Ellis. Louise caused a lot drama for both Emily and Nolan due to her unhealthy obsession with Victoria. And she appeared at Jack and Emily's wedding in the final season, so fans know she's still out there somewhere.

Reboots are currently all the rage, but Revenge's possible return incorporates a refreshing twist that would also bring more diversity to the small screen. Plus, the return of a favorite character would certainly add even more excitement to the new project. Our red sharpies are ready and waiting.

More like this
'Friends' Star Maggie Wheeler Offers Support To Matthew Perry After Reading His Memoir
By Alyssa Lapid
Anne Hathaway Shared A "Thrilling" 'Princess Diaries 3' Update
By Darshita Goyal
This 'Gossip Girl' Wardrobe Error Has Gone Viral On TikTok
By Alyssa Lapid
The 'Scream 6' Trailer Shows Off Hayden Panettiere's Return & Ghostface In NYC
By Jack Irvin and Jake Viswanath
Get Even More From Bustle — Sign Up For The Newsletter
From hair trends to relationship advice, our daily newsletter has everything you need to sound like a person who’s on TikTok, even if you aren’t.